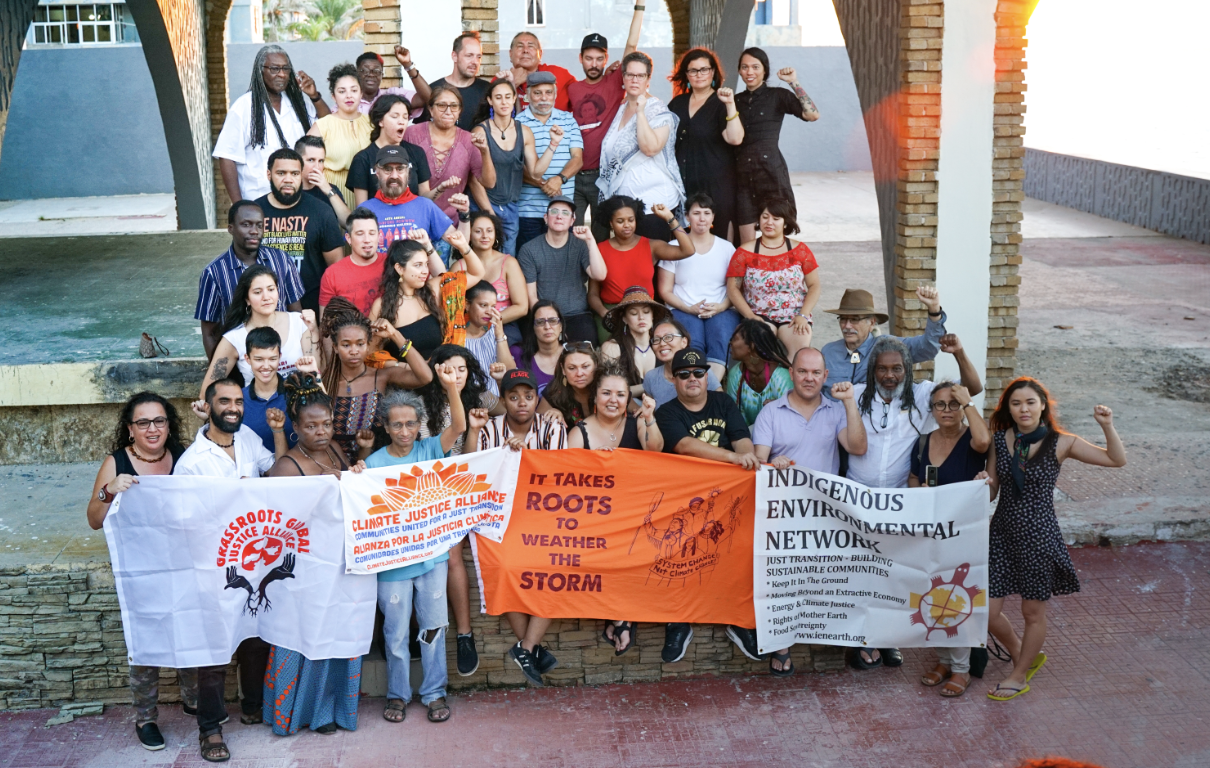 #ItTakesRoots delegation members- comprised of Grassroots Global Justice Alliance, Climate Justice Alliance, Indigenous Environmental Network, and Right to the City Alliance members, as well as representatives from the Movement for Black Lives, and the Rising Majority have returned to our various homes, communities, territories, and struggles from our deeply transformative time together this month.

50 social justice activists from across the United States and Puerto Rico traveled to Havana, Cuba from October 30 – November 2, 2019 for the It Takes Roots delegation to the Continental Convergence for Democracy and Against Neoliberalism, called the #JornadaContinental.

The Convergence included commissions on specific topics such as youth and indigenous sovereignty, as well as side discussions, where members of It Takes Roots were able to strategize with our International partners.

The Jornada Continental is a process of strategic coordination across social movement forces in the region. In 2015, movements to celebrate the 10 year anniversary of the defeat of the Free Trade Area of the Americas (FTAA). The agreement was proposed to further advance the North American Free Trade Agreement enacted in 1994, and would have established a free trade zone across the americas. In addition to celebrating this people’s victory, the movements gathered launched the Jornada Continental as a process of articulation in defense of democracy and against neoliberalism. Given the political context across the americas and in particular the rise of a right wing surge, the Jornada has been seen as a way to converge forces toward sharing a common struggle and vision.

After meeting in 2017 in Uruguay, this year the Jornada Continental aims to bring together close to 1500 people from social movement forces from across the globe and the continent. Over the course of three days, participants will share deep assessments of the current political moment including the landscape of right wing fascism and the assault on democracy. From this assessment participants will consider what is needed and work to develop strategies for joint struggle.

Our goals for this delegation were to:

The delegates build deeper relationships, affirmed the principles of solidarity and grassroots internationalism, and are continuing to fight for a systemic transformation against capitalism, patriarchy, colonialism and racism. The ITR delegation also exchanged ideas with community groups in spaces like Casa Tomada MirArte and the Martin Luther King Center for Human Rights, joined hip hop performances, met with artists, farmers, children, government agencies (e.g. the Cuban Women’s Federation, and the Center for Sex Education), spent an evening at the Puerto Rican mission in Havana, and much more.

We’re excited to bring what we have learned back to apply in our communities. We’ll stand with all peoples who are struggling against the authoritarian imposition of a neoliberal agenda, and who are facing a state violence that is sacrificing lives and is increasing the criminalization of our social struggles.

All Photos taken by Justin Marks with Marks Media, unless otherwise indicated.

It Takes Roots utilizes the common frame to protect our land, water, homes, and bodies. We engage in both trans-local power building and mass mobilizations. We come together to share tools, exercise power, and engage a rapid response committed to building resistance and visionary opposition to oppression, extraction, and exploitation.

The It Takes Roots Member Alliances are:

Read more about our beautiful time together in the photo essay with more information on our daily exchanges and be on the lookout for more information and reflections on the delegation, as well as a recap video publishing soon! The following are selected highlights. To see the full photo album visit the GGJ Alliance Facebook Album

The Martin Luther King Jr. Center was founded on April 25, 1987, as an initiative aimed at promoting values such as solidarity and justice, as well as the social development of the neighborhood where it is located: Pogolotti, belonging to the Havana municipality of Marianao. Committed to the Cuban people, the Martin Luther King Jr. Center promotes integration, learning and solidarity between Latin American and North American nations.

From the work with the community, the institution assumes as its purposes the popular participation in the social processes, from a critical and liberalizing theology that defends the full life of human beings without discrimination.

Day 2 of the #ItTakesRoots Delegation/ 1st Day of The Anti-Imperialist Solidarity Meeting, for Democracy and against Neoliberalism, The Jornada Continental 2019.

In the evening, we were met warmly by the Cuban people representing their communities with delicious food, revolutionary songs and tributes, and lessons on the revolutionary history, current process and organization of the CDRs- Communities for the Defense of the Revolution-  a massive network of organized neighborhood committees across Cuba.

Formed in Cuba on 28 September 1960, early goals of the CDR included mobilization and unification of the people, and advancement of revolutionary ideals.

Day 3 of the #ItTakesRoots delegation / Day 2 of the Jornada Continental- – a global meeting with thousands of people representing 90 countries strategizing to combat Neoliberalism and Imperialism. As visitors from the North, we stand in solidarity with our global south family, stand in support of self- determination, and denounce US Imperialism as well as the economic and trade sanctions and attacks on the Cuban people.

Day 4 of the #ItTakesRoots Delegation/ The third and final day of the #JornadaContinental- a global meeting with thousands of people representing 90 countries strategizing to combat Neoliberalism and Imperialism. As visitors from the North, we stand in solidarity with our global south family, stand in support of self- determination, and denounce US Imperialism as well as the economic and trade sanctions and attacks on the Cuban people.

You can read the full Report of Joint Articulation and Action HERE:

Day 5/ Day 1 of on the ground Organizational and Cultural Exchanges with the Cuban people.

The It Takes Roots Delegation then hit the ground running after 3 intense days of political discussion and exchange at the #JornadaContinental exploring the themes of Gender Equity, Intersecting Identities, and Feminism in Cuba.

“Women in Cuba have always been on the front line of the struggle.”

– Tete Puebla, 2nd in command of the Mariana Grajales Platoon

Cuba is a world leader in early childhood development. 99.5%+ of young children attend a nursery. A combination of State programs & family involvement are key to Cuba’s great strides in nurturing young children and supporting families.
It Takes Roots met with Cuban families for 1st hand information.

We then traveled to Marianao, which was definitely one of the highlights of the #ItTakesRoots Cuba delegation.

We ended the evening with Vegan Tapas and Sunset with Companerxs: Hosted in the home of renowned, revolutionary painter, Diana Balboa where we shared in revolutionary joy and art.

Day 6 / Day 2 of on the ground Organizational and Cultural Exchanges with the Cuban people: The It Takes Roots delegation explored the themes of Antimilitarism in the Cuban Context.

Day 7- Final Day of on the ground Organizational and Cultural Exchanges with the Cuban people: The final day of the historic #ItTakesRoots delegation to Havana, Cuba was spent exploring the theme of Climate Change, Sustainability, and Just Transition.

The delegation then took a scenic bus ride to visit the Finca Marta led by founder, Fernando Rafael Funes Monzote. Finca Marta is a family agroecological project that combines practice with scientific knowledge to contribute to the transformation of the Cuban agri-food system from a local experience. Dedicated to the memory of Marta Monzote Fernández (1947-2007), it began in December 2011 on an eight-hectare estate, in the Caimito municipality, Artemisa province, Cuba.

Finca Marta applies the principles and foundations of agroecology to a specific socio-economic process and geographical environment to design, in a participatory manner, strategies for prosperous and sustainable life in the countryside. You can learn more about the amazing Finca Marta here: http://fincamarta.com/quienes-somos/

We closed the It Takes Roots delegation with a closing ceremony by the sea where we debriefed collectively, discussed upcoming It Takes Roots strategy and action, and more. We were graciously visited by the renowned El Coro Diminuto- an all girls choir for a Farewell performance.