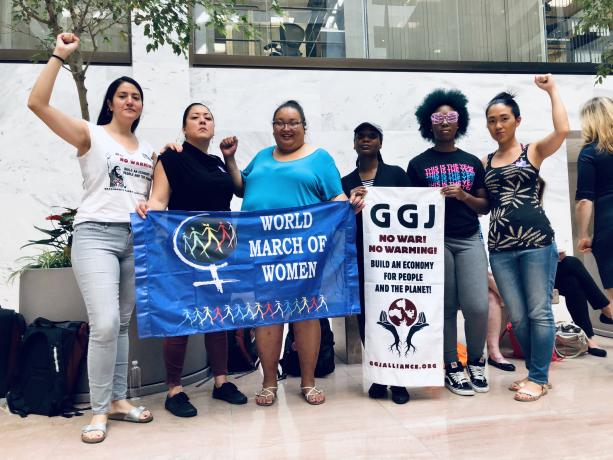 “At this moment of growing feminist resistance, we are unapologetically left, and insist on grassroots feminism. A new generation of women of color and gender non-conforming leaders is stepping forward to defend our dignity and our future. We are not backing down, we are growing in strength. This is our time.”

Today, the Senate and this entire administration have laid bare their disregard and contempt for the rights of women and all survivors of sexual violence. The confirmation of Brett Kavanaugh as a Supreme Court judge by the US Senate is a gross failure of justice that will have repercussions for many years to come not only for women, femmes, non-binary folks, and survivors, but people of color, the working class and poor communities in the US.

In the face of a reactionary rightwing backlash, women of color led feminist movements are growing. On many fronts, we are fighting to defend our fundamental rights of self determination.

Some feminist organizations are mobilizing voters, others building mass marches, others taking direct action. Across all of these, our most critical task is the building of mass, militant political organizations of the many. Our power for the next couple of years will be on the streets. Our tactics need to get sharper and we need to work on aligning our strategies more than ever.

We believe Dr. Christine Blasey Ford. We believe Deborah Ramirez. We believe Julie Swetnick. We believe Anita Hill. We believe survivors. The GOP’s decision to push through Kavanaugh’s confirmation shows how desperate this elite minority is to hold on to their power, even if it means telling millions of women, femmes and survivors in this country that we do not count or matter, and exposing that the justice system of this country is ultimately designed to serve their own specific interests.

In addition to his commitment to roll back reproductive, LGBTQ and Disability rights, Kavanaugh has time and again demonstrated a bias against women, immigrants and working families as a staunch opponent of equal pay for women, access to healthcare, workplace protections, and fair and livable wages for low income and low wage workers. He has also shown himself to be entitled, dishonest, and belligerent. As a Supreme Court justice he will be a tool in the hands of the ultra right to defend the systemic privilege of wealthy, white men in this country – a privilege that includes impunity for sexual violence against women.

What we, women and survivors, are creating is a culture of consent. Our girls should not be intimidated from reporting their experiences of sexual assault because of the internalized perception that they will not be believed and even worse, be blamed.

While we are enraged by the Senate’s confirmation of Kavanaugh, we are not and will not be obliterated or silenced. As women, femmes and survivors of color, we have always known that we cannot rely on systems that endanger our communities to protect us. We do not forget that this nation is founded on genocide, slavery, war, the exploitation of human labor, and the destruction of Mother Earth. There have always been, for us, multiple fronts in the fight for our survival, freedom, and dignity.

Kavanaugh’s confirmation demonstrates the limits of relying on traditional leadership to deliver justice. Their time is up. As grassroots feminists, we are called in this political moment to step up and lead with our vision for a just transition from a white supremacist, patriarchal and predatory capitalism to a liberatory, feminist, regenerative economy that centers the lives and well-being of all survivors and our communities.

“This must be an intersectional space of resistance.  When we march, and chant, ‘Whose courts? Our courts!’ we need to take into account the experiences of women of color that are marching next to you, and understand that their experiences with these very courts are not the same as your experiences. If we’re going to stand in solidarity with one another, we must fight together. My fight must be your fight. And we’re not free, until we’re all free.”

The challenges ahead are real, but they are not insurmountable. Together, with leadership from those most impacted, we will end the systems that create the hateful, misogynist, white supremacist leaders Brett Kavanaugh represents. This week alone, our mighty delegation of Black, Indigenous, API and Latina GGJ members confronted key Senators, built lasting and powerful relationships with survivors of color from across the country, and made our voices heard to the thousands of people gathered here. So while we mourn this shameful, inhumane decision, we also take our grief and allow it to galvanize us for the long term work of building a future that belongs to all of us. In the words of Assata Shakur, “It is our duty to fight for our freedom. It is our duty to win.”