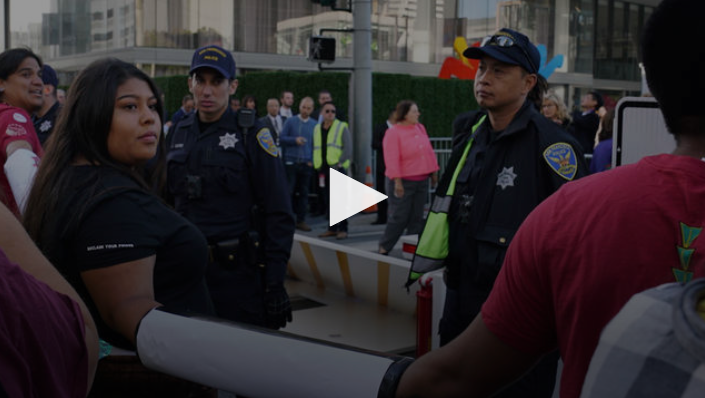 As California Governor Jerry Brown’s Global Climate Action Summit kicked off Thursday, indigenous and climate justice activists blocked the main entrance in protest. While the protests took place outside the GCAS, Gov. Brown and former New York Mayor Michael Bloomberg, the U.N. special envoy for climate action, were inside. Protesters disrupted Bloomberg’s speech at the summit’s main plenary. Democracy Now! was there, in the streets and at the conference.

AMY GOODMAN: We’re broadcasting from San Francisco, the site of the Global Climate Action Summit organized by California Governor Jerry Brown. But the opening of the summit Thursday was disrupted as indigenous and climate justice activists blocked the main entrance to the summit. Democracy Now! was there in the streets.

AMY GOODMAN: This is Democracy Now! I’m Amy Goodman. We’re right at the opening of the Global Climate Action Summit. It is Thursday morning. But it’s not the normal delegates that are coming through; it is a direct action that’s taking place outside. Over a thousand people—organizers, protesters, sky and water protectors—are challenging Governor Brown, the governor of California, who has convened this summit, saying this is Brown’s last chance, not only dealing with emissions but dealing with oil extraction, demanding that he, among other things, ban fracking. Now we see in front of us is a group of people who—well, let’s find out who they are.

ANGELA ADRAR: My name is Angela Adrar, and I’m with the Climate Justice Alliance and It Takes Roots. We’re holding the doors of the Global Climate Action Summit, and we’re blocking them, because the solutions that people need to be hearing, the world needs to be hearing, are actually here on the streets. They’ve always been in the communities, and not behind closed doors, not with people in business attire.

AMY GOODMAN: Are you trying to shut this down?

THOMAS JOSEPH: My name is Thomas Joseph. I’m from the Hoopa Valley Tribe of Northern California. It’s the homeland of my mother. The homeland of my father is the Shoshone Paiute from Owens Valley. My people have lived here for over 10,000 years here in California, and we’ve seen the destruction that this land and our Mother Earth has received from the governance of this statehood, California, and we know that that the leader of—this governor of California is not the climate hero that he makes himself out to be. He has destroyed the indigenous lands of California. He has destroyed it with fracking. He’s destroyed it with water diversions and with dams. We’re here to say, “Enough is enough. We cannot be bought. And if you cannot manage the lands of California properly, then hand them back to the people that can.” We’ve managed these lands for thousands of years. We know how to be in relationship with our Mother Earth.

AMY GOODMAN: And talk about how you’re connected to each other here.

THOMAS JOSEPH: We’re connected right here with some lockdowns, and it says, “We cannot be bought.”

PROTESTERS: [singing] The people gonna rise like the water! We’re gonna calm this crisis down! I hear the voice of my great-granddaughter, saying keep it in the ground!

TOM GOLDTOOTH: My name is Tom Goldtooth, Indigenous Environmental Network, and I come from Minnesota.

AMY GOODMAN: And why are you here in front of the Global Climate Action Summit?

TOM GOLDTOOTH: We’ve been mobilizing, building this movement, not only as indigenous peoples, but building a movement, north and south, of people in struggle—African-American, Latino, Asian, poor white folks, labor, our small farmers and peasants. We’ve been building a movement of real solutions, and that’s why we’re here. We’re denouncing the link with what’s going on in there by Jerry Brown, Michael Bloomberg, these corporations. And some of them are the major polluting corporations, like Chevron, for an example, pushing a false agenda around privatization of air, privatization of trees, of the soil, called cap and trade, carbon offsets, market systems, carbon tax, carbon pricing. All that is just a distraction. It does not cut emissions at source. So we’re here to demand real solutions that protect that sacredness of Mother Earth, protects our communities.

AMY GOODMAN: People have gone through a barrier right in front of the climate summit. And we’ll see what’s happening here.

CASEY CAMP-HORINEK: Casey Camp-Horinek, Ponca Nation of Oklahoma. I’m a councilwoman, so I come on behalf of my people for one reason, because Phillips 66 and the extractive industry, the fracking and injection wells, are killing the earth, the water and the air, and that kills us. I’m here as a mother, a companion, a grandmother, a great-grandmother and a future great-great-great-grandmother. And it is the right of all the silent nations and all of my people to join hands and to honor the natural laws that the creator put us in. And we’re going to change the world. There will be no more oil and gas. We’re going to pray it back into the ground where it belongs.

AMY GOODMAN: Why are you trying to shut down the entrance to the Global Climate Action Summit?

CASEY CAMP-HORINEK: Because they’re full of false solutions here. They’re trying to buy and sell the air. And when they buy and sell the air here, it pollutes our people everywhere. They act as if the air stands still and the wind doesn’t blow. But this is just a lie that Jerry Brown is telling right now. He’s trying to act like he’s going to zero emissions, when in fact he is going to up the emissions, he’s going to double up on fracking. There’s going to be more pollution here, and they’re going to be in the same environmental genocidal process that we in the Ponca Nation are enduring right now.

REPORTER: Right now, protesters are standing outside calling this a hypocrisy, saying California hasn’t done enough to curb drilling in this state. Can we expect any announcements to that effect?

GOV. JERRY BROWN: Look, as Mayor Bloomberg says, this is a 10-point—10 dimensions where we’re looking. There’s no one-off here where you just do one thing. There’s no one thing. There’s many, many things. California, with the leadership of our Air Resources Board under Mary Nichols, has released a scoping plan that covers the whole range of emissions, from oil to transportation to trucks to housing, commercial, agriculture, cement, battery storage. You name it, it’s there. So my plan is an integrated plan, built up over time, that is subject to review on a regular basis. And we welcome any suggestions people have. But I believe California has the most far-reaching plan to deal with emissions, as well as oil consumption and production. Our goal is a 45 percent reduction in oil production, as well as consumption.

MICHAEL BLOOMBERG: America is a wonderful country. Here we’ve got environmentalists protesting an environmental conference. It reminds me of people who want to build a wall along the Mexican border to keep people out from a country that we go to for vacations. Something is crazy here.

PROTESTERS: Our land is not for sale!

CINDY WIESNER: The air is not for sale!

PROTESTERS: The air is not for sale!

CINDY WIESNER: Our water is not for sale!

PROTESTERS: Our water is not for sale!

CINDY WIESNER: Pachamama is not for sale!

PROTESTERS: Pachamama is not for sale!

CINDY WIESNER: Our people, our communities are not for sale!

PROTESTERS: Our people, our communities are not for sale!

CINDY WIESNER: You have only 300 selected delegates! This is only a trade show! It’s only for the biggest bidders!

AMY GOODMAN: What’s your name, and what group are you with?

CINDY WIESNER: Cindy Wiesner with Grassroots Global Justice Alliance. We’re here, part of It Takes Roots, telling Bloomberg and all these corporate heads and business leaders that our planet is not for sale, our communities are not for sale, our air and water is not for sale. They cannot commodify the commons.

AMY GOODMAN: And what is your name?

AMY GOODMAN: Thank you. And what’s your name?

ANANDA LEE TAN: And I’m from the territories of the sabertooth and the Musqueam, where Prime Minister Trudeau is planning on buying a $6 billion pipeline. And his friends, elected leaders, governments and industry are gathering here to put billions and trillions of dollars into bogus technologies like clean coal and nuclear power and mega hydro projects, and they are trading out our future—our future—traditional lands and territories, for a bogus—for perpetuating the problem, entrenching the fossil fuel economy, and really perpetuating the system, causing this crisis. Civil society leaders, elected leaders, should stand with communities, not corporations, and we’re here to let them know they’ve got to pick a side, because the sides are clear.

PROTESTER: People should be in the center of the decision.

AMY GOODMAN: After the protesters were removed from the hall, former New York Mayor Michael Bloomberg began his speech by repeating his comment from the earlier news conference: “Only in America could you have environmentalists protesting an environmental conference,” he said. Well, when we come back, we’ll look at one of the more contentious issues within the environmental movement: cap and trade. Stay with us.