The International Women’s Day of Action is a yearly affirmation of the struggles and power of women across borders. As members of the World March of Women and hosts of its U.S. chapter, every year, GGJ members organize actions toward a just transition to a feminist economy.

First celebrated by the Socialist Party in 1909, International Women’s Day recognized that women’s rights are worker’s rights. In 1910, over a million people mobilized around the world in celebration, solidarity, and struggle. In the following decades, women in the United States organized against workplace catastrophes that killed hundreds of workers, changing labor legislation and raising wages. Across the world, women sparked revolutionary social movements.

Today, we recognize the interconnectedness of injustice, and therefore, the interconnectedness of the solutions. Capitalism relies on a patriarchal organization of society. Resource exploitation relies on state violence, which amplifies gender-based violence. To affirm women’s rights as worker’s rights is to fight for the autonomy of women’s bodies is to organize toward a feminist economy – an economy for people and the planet.

Since we founded the U.S. chapter of the World March of Women in 2015, we have been doing just that.

Past International Women’s Day of Struggle 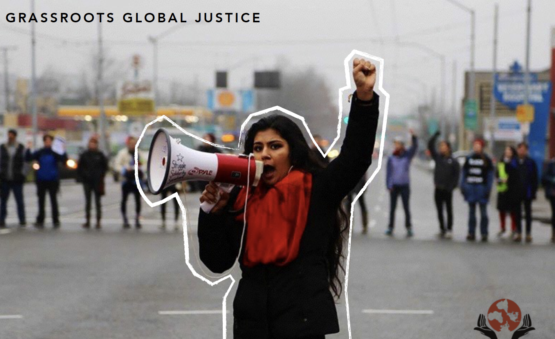 Past International Women’s Days of Struggle

In 2015, GGJ members in over 10 cities organized actions. On April 24th, as part of the World March of Women, we hosted a 24-hour feminist action from 12-1 pm in every time zone around the world to commemorate the...