The World March of Women (WMW) is a global feminist action network. The WMW started in 1995 as a call for women to march and take action around issues of poverty and violence in Quebec.   In 2000, the World March of Women became a worldwide movement to connect women’s struggles globally. The areas of action are around Peace and demilitarization, Violence against women, Women’s work / Women’s economic autonomy, Common good and public services. GGJ is the 65th National Coordinating Body of the WMW, the national chapter in the US.  www.worldmarchofwomen.org

On the days leading up to International Women’s Day on March 8th 2015, Grassroots Global Justice (GGJ) Alliance announced the formation of the US chapter of the World March of Women, a global feminist movement with national coordinating bodies in 65 countries around the world.  The international World March of Women (WMW) began as a campaign against poverty and sexist violence in the year 2000 and, following on from this campaign, decided to continue as a permanent movement, organizing in four Action Areas: Women’s work (Women’s economic autonomy), Violence against women, Common good and public services, and Peace and demilitarization. In 2014 at GGJ’s 4th Membership Assembly our membership participated in a historic vote to launch the first ever US chapter of the World March of Women. With this launch, the US became the 65th country/territory in the world, and the 17th in the Americas, to build a national WMW chapter. A WMW Committee was formed within GGJ to develop the structure and program for the WMW US Chapter. The WMW operates on the principle that there is no one version of feminism that will work for every community, and so the GGJ membership has been inspired to encourage the articulation of a diversity of feminisms. 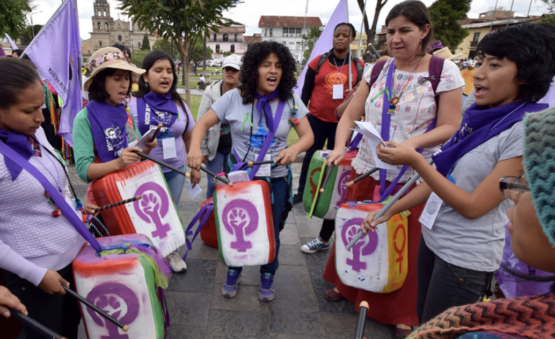 World March of Women over the Years

At the Membership Assembly 2014, GGJ members made the historic decision to build a US chapter of the World March of Women, an international feminist action movement comprised of 67 national chapters across all continents. The movement connects grassroots groups...