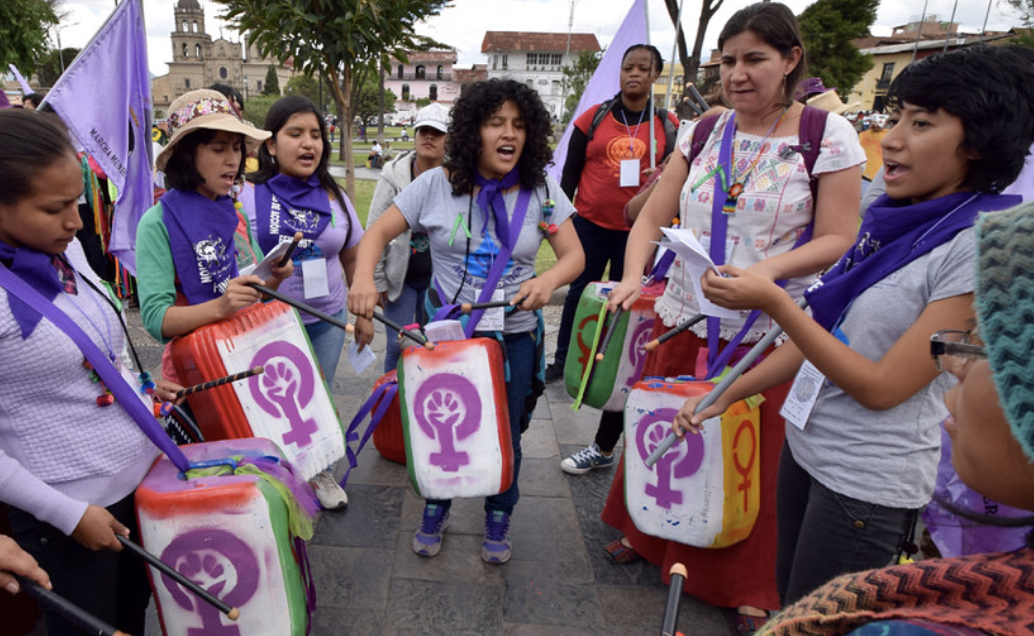 At the Membership Assembly 2014, GGJ members made the historic decision to build a US chapter of the World March of Women, an international feminist action movement comprised of 67 national chapters across all continents. The movement connects grassroots groups and organizations working to eliminate the root causes of poverty and violence against women.

Through a dynamic program of education in action, the US chapter of the World March of Women is building a movement for a Just Transition to a Feminist Economy.

Our member organizations have engaged in expansive learning and discussion on feminisms and gender justice. Since 2016 we We have held 4 Feminist Organizing Schools, led grassroots feminist trainings at membership assemblies, organized speaking tours, actions, delegations, and more. We have harnessed the power of political education to catalyze feminist action. In 2018, for example, a delegation of GGJ feminists took the Capitol to condemn the Kavanaugh hearings.

In 2014, Sandra Moran from the International Committee of World March of Women and the Coordinator of Sector de Mujeres in Guatemala met with nearly 1,000 GGJ members and allies in seven US cities as part of our Reclaiming Feminisms at the Grassroots tour.

In 2015, nearly 100 feminists from the World March of Women of the Americas met in Cajamarca, Peru for the fourth regional meeting. We prepared for the International meeting in Mozambique by sharing analysis and context on our region, and by preparing maps of resistances and alternatives from each of our countries – Mexico, Guatemala, Panama, Cuba, Venezuela, Chile, Brazil, Quebec, the United States and Peru.

In 2016, along with 100 women from 40 countries, we attended the 10th International Meeting of the World March of Women, the highest decision-making body of the global movement. The meeting took place in Mozambique. Delegates from the National Coordinating bodies adopted political platforms, decided on International actions, evaluated and reviewed our work from the previous years, and elected new International Committee members.

Our goals, as the US chapter were to participate fully, learn about about the global context, make a contribution to the conversation about LGBTQ inclusion, and build with other national coordinating bodies. (Each country/region/chapter in the World March of Women is led by what is called a “National Coordinating Body” to respect the variety in organizational form of all the regions.) From food sovereignty in Latin America, to fighting for democratic rights in Kurdistan and projects for women’s economic autonomy in Africa, we connected with feminist fighters across the globe. In turn, we brought the fight for justice for Berta Cáceres.  We returned home inspired to continue to build our chapter and be in feminist solidarity with one another across borders.

In 2017, World March of Women members from around the world took to the streets in solidarity with us in the United States as part of the first Women’s March on Washington following the inauguration of Donald Trump. U.S. foreign policy affects people at home and abroad. At the same time, countries around the world, not just the U.S., are facing the rise of reactionary right-wing governments, impacting women and people of color in particular.