We are releasing From Crisis to Transformation: A Just Transition Primer in collaboration with the Transnational Institute, co-authored by Kali Akuno, Katie Sandwell, Lyda Fernanda Forero, and Jaron Browne. We are excited to share this report in Arabic, Spanish, and English, and plan to add translations in Bahasa, French, and Portuguese.

This Just Transition Primer evolved over years of development in response to global allies’ requests for more articulation of the strategy of Just Transition from the perspective of popular movements. Exploring the root causes of the climate crisis, our primer argues that we need transformative and anti-capitalist visions to bring us “from crisis to transformation.”

What do we mean when we call for Just Transition? What does this concept and strategy entail, and how can we put it into practice? 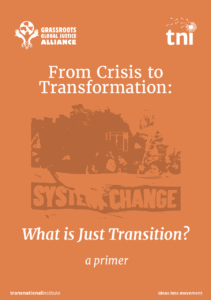 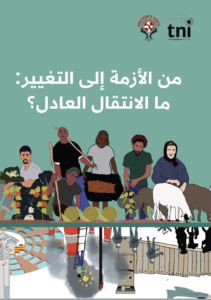 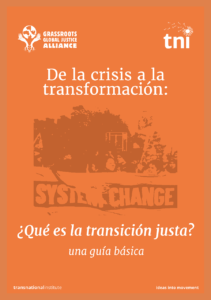 GGJ and TNI are very grateful to Hamza Hamouchene and Tchenna Maso for their contributions of sections on Just Transition in North Africa and the Brazilian Movement of People Affected by Dams, respectively. The authors also extend their gratitude to Jose Bravo, Zoe Brent, Daniel Chavez, Jennifer Franco, Tom Goldtooth, Hamza Hamouchene, Chloe Henson, Angela Mahecha, Sara Mersha, Karin Nansen, Pietje Vervest, and Cindy Wiesner for their helpful and insightful comments on drafts of this publication and to all who shared their wisdom with us throughout the writing process.

We offer this primer as a contribution to the broader ecosystem of Just Transition frameworks and articulations. In particular, we honor the work of the Just Transition Alliance, the Indigenous Environmental Network, the Climate Justice Alliance, Movement Generation, the Labor Network for Sustainability, and Trade Unions for Energy Democracy, among many others. Please see the Just Transition resources at the end of the report for more information on many of these formations.