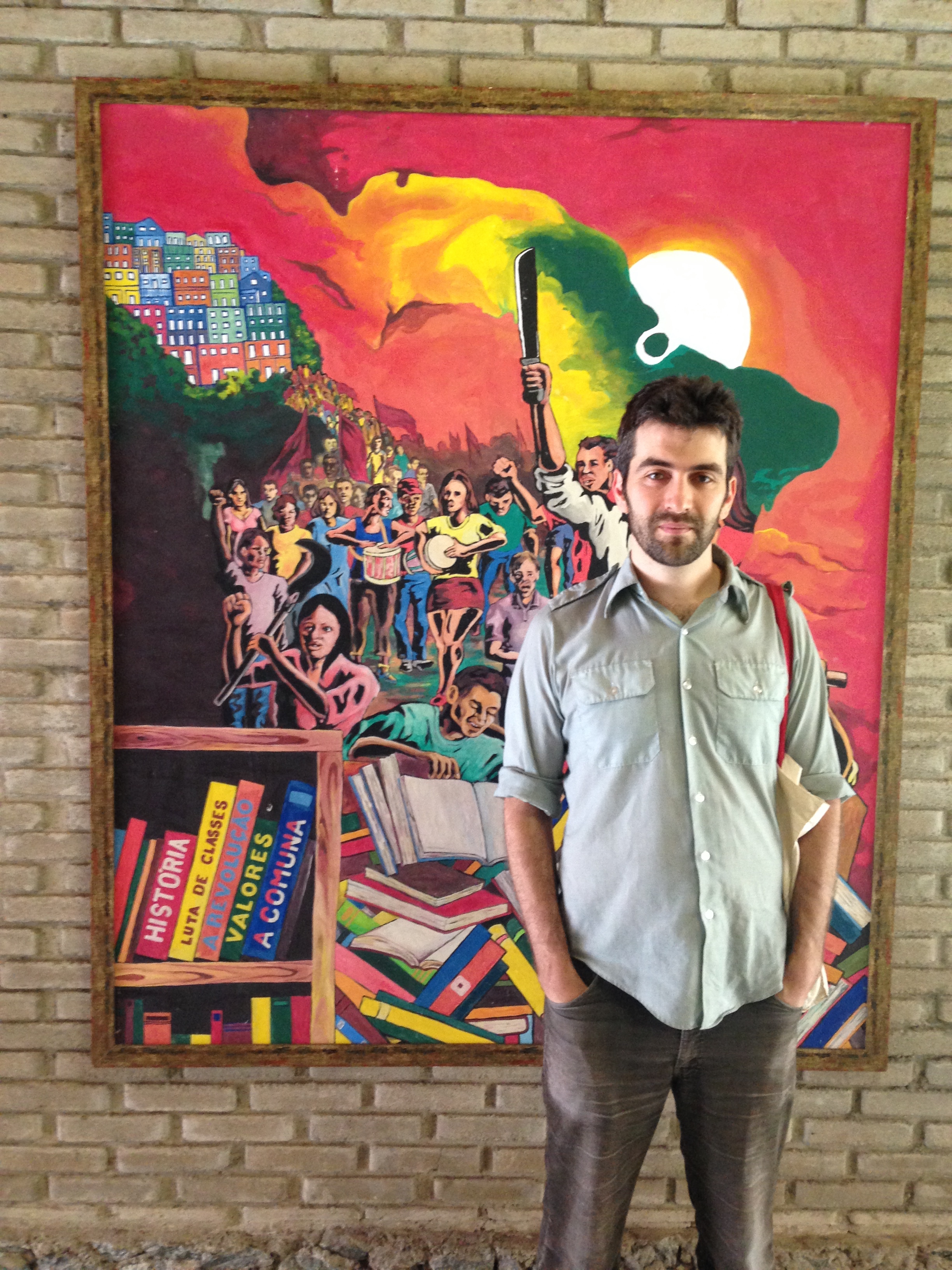 first ever International English Language Course on Political Training for Political Educators outside of Sao Paolo, Brazil. The 6-week course was coordinated by the Landless Workers Movement (Movimento dos Trabalhadores Rurais Sem Terra [the MST]) at their national school for political education, Escola Nacional Florestan Fernandes (ENFF). I came as a representative of the Vermont Workers’ Center, and was among 60 participants from 47 organizations and 17 countries. Most organizations were members of La Via Campesina, an international organization primarily dedicated to the issues of peasant movements around the world and food sovereignty (GGJ is a member).  Organizations ranges from small farmer movements in Zimbabwe to organizations that work with adavasi (indigenous) movements in India to South African trade unionists to members of the Kurdish liberation struggle to a leftwing Mexican youth organization.

ENFF is the flagship school of the MST. Since their founding 31 years ago, the MST has been committed to political education (or formação in Portuguese). They have schools dedicated to political education in all 23 Brazilian states where they have a presence. ENFF was built 11 years with the volunteer labor of over 1,000 MST members and many other supporters of the movement. It is a gorgeous campus, populated with vibrant flowers, inspiring revolutionary murals made by each class that had passed through there, beautiful architecture, small plots of food productions, and a design that emphasized communal space (a small plaza in the middle of a cluster of dormitories, with benches and a gazebo; the courtyard where we held our daily misticas; the open verandas where we had cultural nights, celebrations, etc., on both stories of the building that held the kitchen, cafeteria, and a small store with MST products). There was also an incredible library that held thousands of books on various subjects, from the history of revolutionary struggles around the world to social theory to agroecology (mostly in Portuguese and Spanish). The MST leaders at the school described ENFF as the “patrimony of the international working class.” 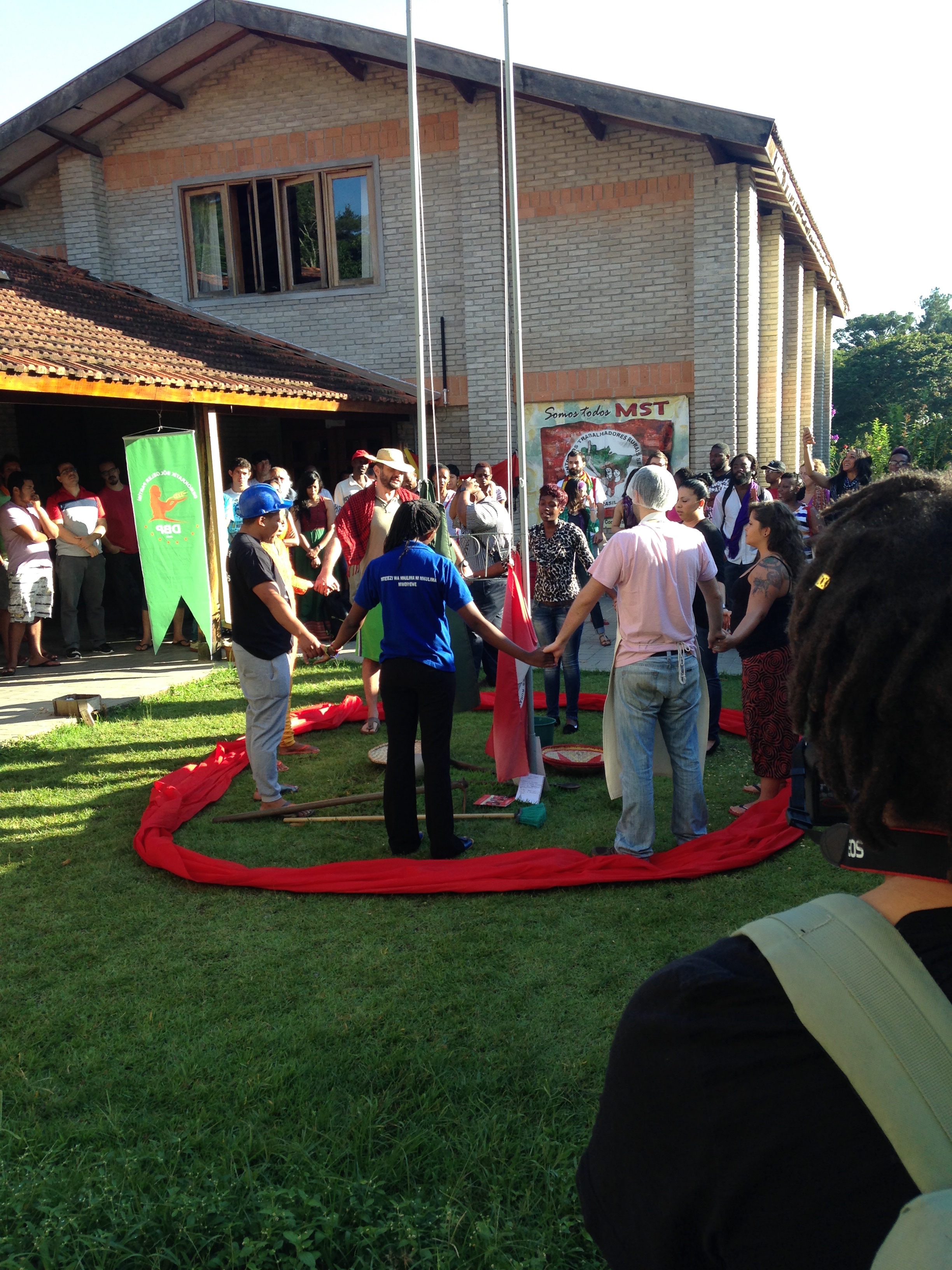 who took 4 month shifts to help run the logistics and programming of the school. Like all groupings in the MST, they had a name and slogan: “Apolônio de Carvalho,” named after an important Brazilian socialist. To facilitate the functioning of the school, all students were expected to do “militant work,” volunteer labor to support the day-to-day needs of the school community. I was on the coffee team that set up and cleaned up for the multiple coffee breaks through the “school day.” Other militant work ranged from the production team that helped produce and harvest the food grown on campus; a childcare team; a cultural team that helped plan the “cultural nights,” helped with the programming for the campus radio station; collective laundry; cleaning up after meals. Militant work is a central part of the pedagogy of the MST, partly around wanting to put intellectual labor alongside other forms of labor and also as part of creating new social relations, where labor is about meeting collective needs and is not performed because of coercion.

We had classes 6 days per week. Every day began with a 10-20 minute long “mistica,” planned by each of us in our small groups (“nucleos do base” [NB’s]) and by other NB. Mistica both describes a particular activity and a broader concept. The activity is usually a short “performance” that tells a particular story about a particular struggle, while projecting a vision of the future. I put “performance” in quotes because the MST is emphatic that it is not “theater,” but rather an expression of reality as we experience it. Mistica incorporates symbols, music, art, movement, “acting,” participation by “spectators.” One of the misticas my NB planned conveyed the intersection of patriarchy, dispossession, and capitalism. One of the ones that Daryl (the other GGJ representative) and his group prepared conveyed the patterns of state violence around the world and their link to imperialism.

Many MST movement elders attribute mistica as the primary reason they’re still in the movement. It’s spiritual and intellectual sustenance, and stretches minds and hearts in preparation for the activity of the day, Mistica also described the overall “spirit” or “expression” of a group of people, the outward expression of collective revolutionary spirit.

An MST member riding with me and another classmate to the airport at the end of the program commented that our class seemed to have a very beautiful mistica. There were songs that were our songs (some people brought from their movements, others that were brand new and composed spontaneously); chants that were ours; countless manifestations of a profound camaraderie formed through intense, emotional learning together, sharing and hearing each other’s stories, working together, traveling together during the intensive “field week,” celebrating together during various cultural nights and late night festivities.

The coursework itself was incredible. The MST sees left theory as a living body of theory, and draws heavily from the Marxist Leninist tradition. Some of the more interesting courses were on the history and development of imperialism, the reproduction of capital in agriculture, a great session on gender, political organization, and popular education. There was quite a lot of healthy debate on organizational form, the role of the state, the legacy of colonialism and the persistence of racism, the dynamics between the old hegemonic imperial nations and the newly industrializing “BRICS” countries that increasingly play out imperial relations on a more regional level.

I learned an incredible amount about social movements in Brazil and around the world. From the MST, we learned about their incredible dynamic relationship between organizational form, strategy, and tactics. Their process of land takeovers entailed setting up an incredibly cooperative mini-society of several hundred families, a “movement baptism” that created the conditions for embodying radical new forms of human relations. The MST doesn’t actually legally exist in Brazil, and many of the movements represented there were very suspicious of the growth of World Bank and foundation-funded Non-Governmental Organizations and Non Profit Organization (seeing with incredibly clarity the ways in which they coopt movements and movement leaders).

One of the profound lessons for me was on the meaning of true internationalism and solidarity. The MST is in a very challenging moment in Brazil’s political and economic history: the ruling Workers Party has betrayed many of its original principles to the whims of international finance capital; the right wing is mobilizing larger crowds than have been seen in decades. Yet, instead of turning inwards, they continue to launch programs like this training, have helped started countless other movements around the Brazil, and remain committed to the development of an international revolutionary social force. In fact, I believe that’s exactly what see as necessary in this context, rather than turning inwards.

It’s hard to some up any one main takeaway from that 6 weeks. I’m incredibly inspired to be personally connected 60 people fighting in inspiration liberation struggles around the world. I’m inspired by the deep and broad commitment to political education and leadership development. I’m deeply moved by the way in which the MST both fights for total social transformation while building the new social right now. And I’m so impressed with the many examples of the ways in which strategy flows from a profound and sharp assessment of the objective and subjective conditions during this phase of advanced capitalism.