GGJ members took to the 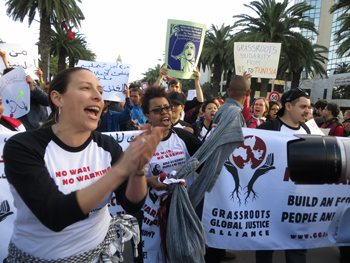 streets of Tunis today with tens of thousands from movements across the world to mark the beginning of the World Social Forum 2013!  For many of us, it’s the first time we’ve been to Africa, and we felt inspired and humbled by a population whose history of resistance for over 5,000 years has primed people to be able to resist deeply. of  Our shirts sparked lots of excitement and conversation from folks who were surprised and inspired to see a 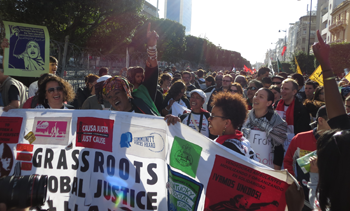 message  like ours coming from the United States, calling for No War, No Warming! Build an Economy for the People and the Planet!  GGJ members led the US contingent in lively chants and songs throughout the march, making friends with folks from around the world and learning some chants in Arabic. 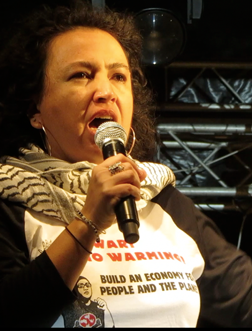 After over 3 hours of marching, we landed at the Opening Ceremony where Cindy Wiesner, National Coordinator of Grassroots Global Justice, joined other powerful women speakers to kick off the World Social Forum.  Among the other speakers was Besma Khalfaoui, the wife of Chokri Belaid, opposition leader whose recent political assassination in early February has transformed him into a martyr and icon for the Tunisian revolution.

Tomorrow, the sessions begin, so stay tuned for more posts from our workshops in the Climate Space to Internationalist Feminism!