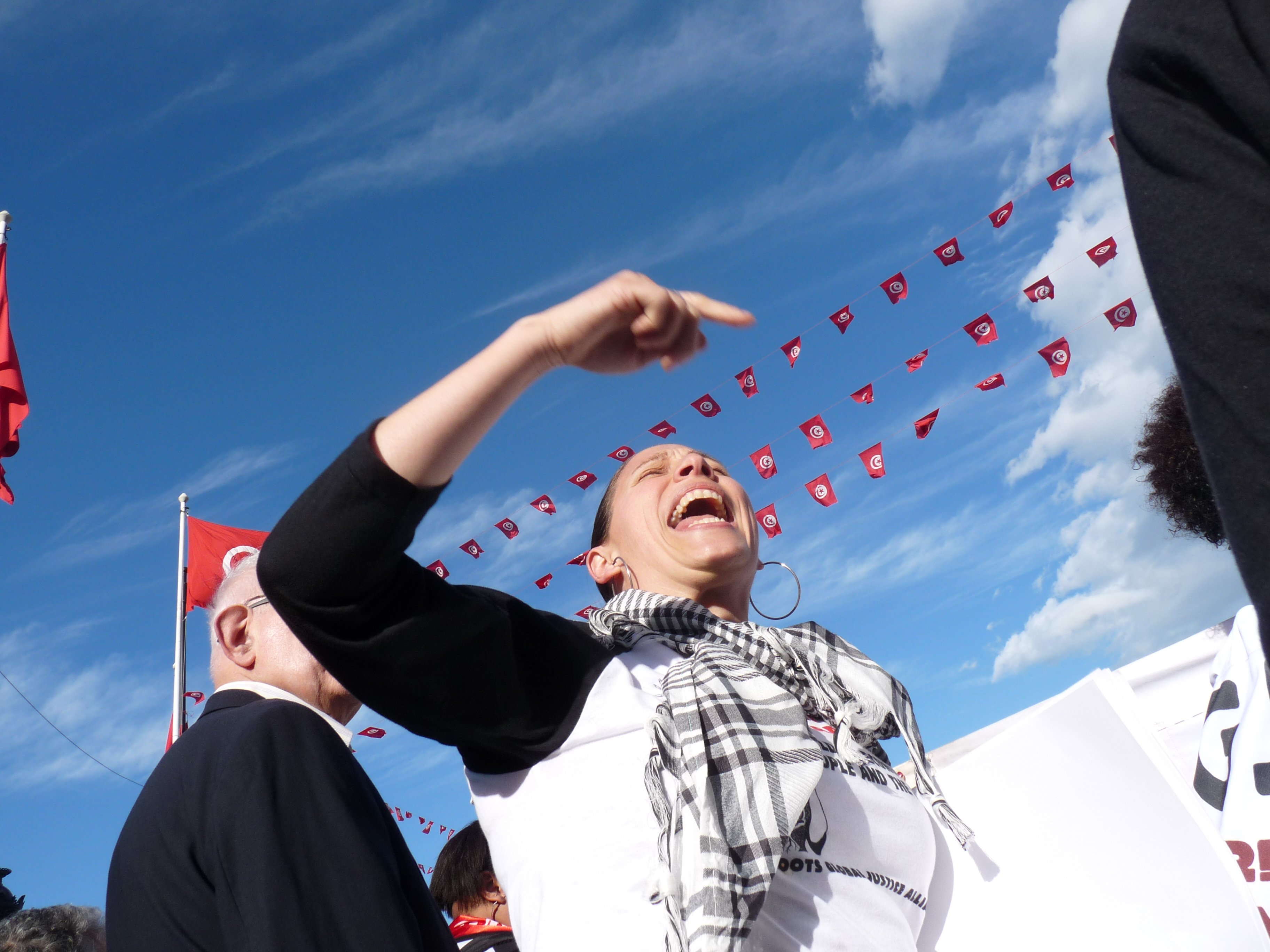 Tens of thousands of people marched through downtown Tunis on Tuesday in a spirited march celebrating the beginning the 13th World Social Forum – the first to be held in an Arab country. The majority of marchers were from Tunisia and neighboring nations, but there was substantial representation from Europe, as well as from across South America, Asia, and Southern Africa. An enormous annual gathering that bills itself as a “process” rather than a conference, the WSF brings together by far the largest assembly of international social movement organizations, aimed towards developing a more just and egalitarian world.

The WSF was first held in Brazil in 2001, and is billed as an alternative to the wealth and power wielded at the World Economic Forum, an elite annual gathering in Davos, Switzerland. Tuesday marked the official opening of the WSF, but official sessions start today and continue through March 30 at the El Manar University Campus. The theme of this year’s Forum is “dignity,” inspired by the movements collectively known as the Arab Spring, launched here just over two years ago.

As of last night, the WSF had reported registration by more than 30,000 participants from nearly 5,000 organizations in 127 countries spanning five continents. Since that estimate, thousands more have registered on-site. The officially announced activities include 70 musical performances, 100 films, and 1000 workshops.

Tuesday’s march traveled three miles from downtown Tunis to Menzah stadium, with chanting in multiple languages and representation from a wide variety of movements from the Tunisian Popular Front to Catholic NGOs to ATTAC, a movement challenging global finance. At Menzah stadium, an opening ceremony began at 7:30pm with female social movement leaders from Palestine, South Africa, Tunisia, and the US taking the stage, including Besma Khalfaoui, widow of Tunisian opposition leader Chokri Belaid, who was assassinated last month. According to Forum organizers, only women were chosen for the opening as a response to the rise of conservative religious governments in the region as well as patriarchal systems around the world. “We decided this because women are the struggle in the region,” said Hamouda Soubhi from Morocco, one of the organizing committee members. “They are struggling for parity, they are struggling for their rights. The new regimes want the constitutions to be more religious, and we want to take our stand against this.”

In short speeches – each about 5 minutes in length – the women projected a vision of a global movement that was inexorably rising, as the audience roared in approval. “We are trying to hold our government accountable for what it has done and continues to do around the world,” said one of the speakers, Cindy Wiesner of Grassroots Global Justice. “Some of the most inspiring movements and people are gathered here in Tunis. Together, we can change the course of history.” Among the loudest cheers came when speakers mentioned left political leaders and movements, including the jailed Palestinian leaders Marwan Barghouti and Ahmad Sa’adat, as well as sustained applause for Hugo Chavez and the Occupy movement.

After the opening speeches, legendary musician Gilberto Gil took the stage. Known for his politics and musical innovation, Gil was a leader of Brazil’s tropicália musical movement of the 1960s and more recently served as Minister of Culture in the administration of President Luiz Inácio Lula da Silva. As a sea of people from around the world danced ecstatically, Gil played a set that ranged from his own songs to pieces by Bob Marley and by John Lennon.

Among the opening sessions this morning was a press conference led by members of La Via Campesina, an organization representing more than 200 million poor farmers from 150 local and national organizations in 70 countries in Africa, Asia, Europe and the Americas. “The false solutions of the government have been affecting us worse and worse,” said Nandini Jayara, a leader of women farmers in India. “I feel the WSF is a stage for us to share our problems and work together for solutions.”

Over the past decade, the WSF has been credited with a number of important international collaborations. For example, the global antiwar demonstrations in February 15, 2003, which have been called the largest protests in history, came out of a call from European Social Forum participants. In the US, labor activists who received international attention for a successful factory take-over in 2008 at Chicago’s Republic Windows and Doors factory said inspiration came from workers in Brazil and Venezuela that they met at the World Social Forum.

Among the many movements seeking to launch new campaigns and coalitions are indigenous activists who are seeking to educate activists from around the world about the problems in the climate change solutions, such as the “cap and trade” strategy put forward by the United Nations and mainstream environmental organizations. “We have to look at the economic construct that has been created in this world by rich industrialized countries and the profiteers that have created this scenario,” said Tom Goldtooth, director of Indigenous Environmental Network, an international alliance of native peoples organizing against environmental destruction. “We have ecological disaster, and that is capitalism’s doing.” Goldtooth’s organization is also seeking to raise awareness about REDD (Reducing Emissions from Deforestation and Forest Degradation), a United Nations program promoted as an environmental protection strategy that Goldtooth calls “genocidal” because it promotes solutions like carbon trading that he says will lead to mass deaths of poor people due to environmental catastrophe brought about by climate change. “We’ve come to a time where there has to be a transition to something different, Goldtooth added. “Our communities are saying we need some action now.”

Every year, some Forum attendees must overcome travel restrictions from various countries, and the WSF is also plagued by infighting from a sometimes fractured left. Among the incidents reported this year, Human Rights Watch reported that Algerian border authorities illegally barred 96 Algerian civil society activists from traveling to Tunisia. Meanwhile, in Tunis, a group identifying themselves as Tunisian anarchists said that they were boycotting the Forum, and appeared at the opening march, parading in the opposite direction of the rest of the crowd.

“For us the forum is already done. We have succeeded,” declared Hamouda Soubhi in an interview at the close of the opening ceremony. “Tomorrow will be problems, as there always are.”