Dania Flores is one of 12 members on the Grassroots Global Justice Alliance delegation to Lima, Peru for the People’s Summit on Climate Change.

Monday December 8, Day 1: After preparing with each other by conference calls for the past month, we finally were all together for our first morning meeting at 7AM in our great Hostal Las Camelias. We started the day by hearing some context on what had happened in the last 3 days, including the Rights of Nature International Tribunal and the work of people inside and outside the UN negotiations, the difference in the dynamics. Tom Goldtooth described it as “Schizophrenic” – like night and day: the agenda of the UN is about extraction, market and remediation/mitigation, a capitalist one. Here at the peoples summit we have a conversation about sustainability and life one of respect, human rights and nature rights, that painted a frame work for us of what it was to come. Last night we had dinner and bonded, we all had been very excited of the different things we are about to witness and also be part of, I am loving this… We are loving this.

Report on the Rights of Mother Nature Tribunal.

To see the list of judges on the diverse international panel, and the cases and lead presenters, visit this website: http://therightsofnature.org/lima-2014-tribunal/

As the world looks to Lima, Peru for the 20th UN COP on Climate Change, the International Rights of Nature Tribunal convened in Lima. The Tribunal heard twelve international cases that were aligned with UNFCCC COP 20 priorities. What was unique to this hearing is that each case was reviewed within a framework based on Rights of Nature and the Universal Declaration of the Rights of Mother Earth.

Indigenous rights activist Casey Camp-Horinek (Ponca from Oklahoma, USA) and Patricia Gualinga, an indigenous of the Amazon and director of Sarayaku, provided expert witness testimony on the critical importance of Rights of Nature. 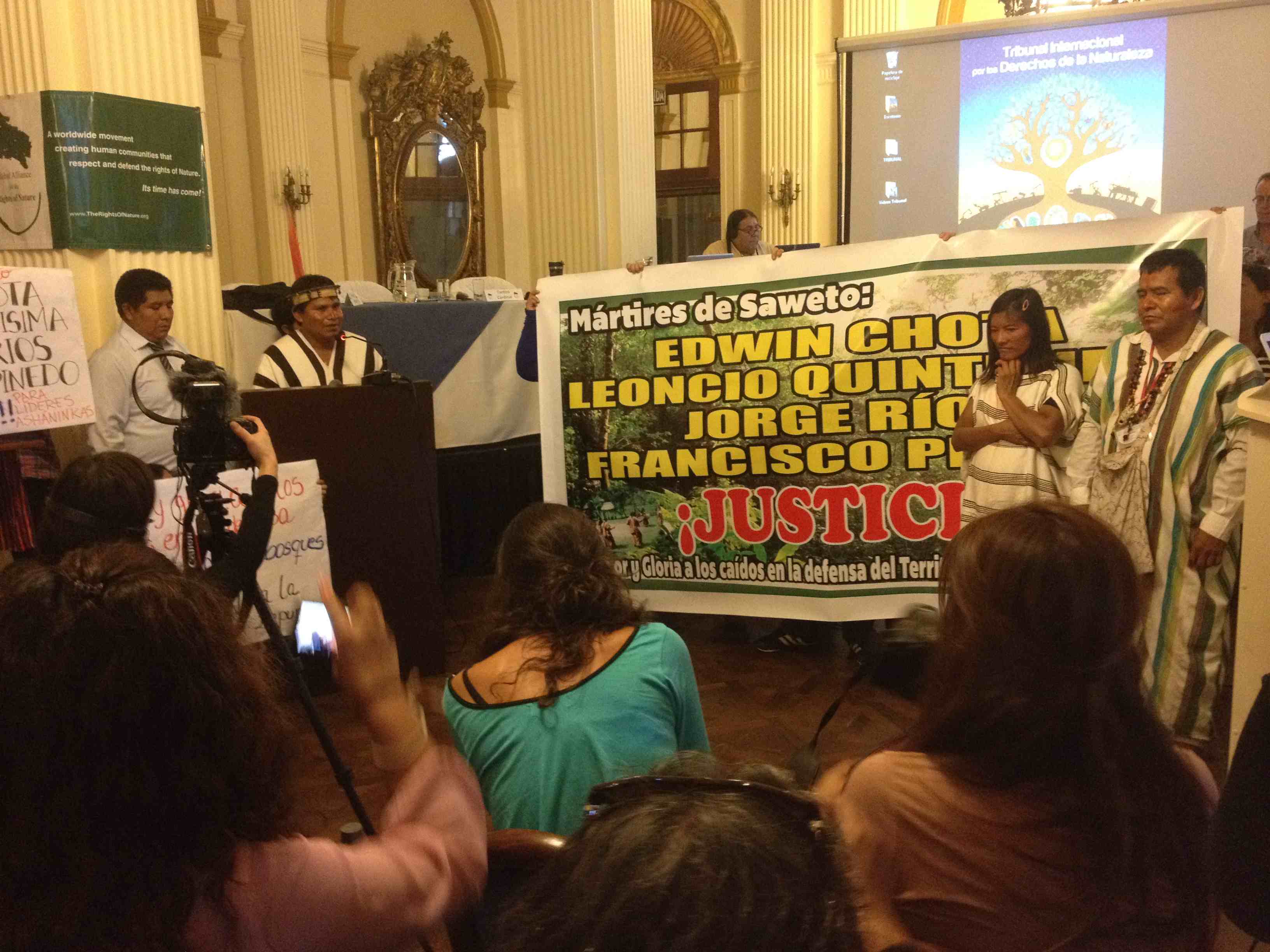 The Global Alliance for Rights of Nature was founded at a gathering in Ecuador in 2010, two years after Ecuador became the first nation in the world to adopt Rights of Nature in its Constitution and Bolivia passed its Law of the Rights of Mother Earth. Across the United States dozens of communities have adopted local rights of nature laws within the framework of a Community Bill of Rights in recent years. Click here for more on the declaration of the Rights of Mother Earth.

The Rights of Nature movement draws on the wisdom and cosmovision of indigenous peoples in positing a new jurisprudence that recognizes the right of nature in all its forms to exist, persist, evolve and regenerate.

One of the most impacting stories was the Yasuní National Park Oil drilling struggle. Anyone would think that if you have a national park that is conserved and preserved as a nature preserve, this would mean to keep and safeguard the natural state. But this case has been a perfect example of governmental land grabbing with a legal instrument, and instead of saving it for the preservation of the planet, it has been sold to the powers of the capitalist elite who have criminalized community organizers. By labeling organizers as “terrorist” the elite have twisted the stories of social fights to stop a public referendum that is guaranteed by the constitution and by standards of the law of Ecuador. Click here to learn more about the Yasuni struggle to defend their land

We believe that the process here at the People’s Climate Summit “CUMBRE DE LOS PUEBLOS” is a more legitimate process and a real democratic one, anyone was welcome to be there, everyone heard the evidence and listen to the victims. We also believe that the real experts and the ones who know about the real consequences of these violations are the people on the ground. We also agree that the people on the front lines should be the people leading the way to the solutions.

We also heard testimony of some of the issues in the North by Indigenous rights activist Casey Camp-Horinek (Ponca from Oklahoma, USA). She explained the issue of fracking, comparing the fracking process of shattering the shell to “cracking and breaking the bones of Mother Earth.” She also stated that in the last year they had counted more than 400 Man Made earthquakes, that started days after the fracking process had started. Here is some of her testimony:

Our Mother Earth is the source of life. Water is her lifeblood. The well-being of the natural environment predicts the physical, mental, emotional and spiritual longevity of our communities.

Our Indigenous Peoples believe that our system of governance must reflect our belief in balance and harmony. We believe in the equity of all of Creation, not just ourselves. The animals, plants, rocks and all elements have as much right to exist as people do.

This didn’t mean that we could not harm another living creature, since we require food from the plants and animals, but that we are to respect the sacrifice made by the animals and plants. These sacrifices were part of the Original Instructions to respect each other, to care for each other, because we are related to each other, as brothers and sisters.

We believe by observing the Natural Laws of Mother Earth, we would be able to learn the right way to life – the good way of living, to find balance and harmony with Nature.

Indigenous Peoples are very lawful people. From the Haudenosaunee Indigenous Peoples of North America, to our Ponca Peoples; we recognize our responsibilities and duties to the natural laws of Creation, as defined by our Original Instructions. Our Original Instructions declares and teaches us of the four sacred elements of life: air, light/fire, water and earth and its pollen and seeds in all their forms must be respected, honored and protected for they sustain life. Our Natural Law teaches us to respect all Creation, from Mother Earth and Father Sky and to all Life that have their own laws, and who have rights and freedom to exist. We are taught we must treat this sacred bond with love, compassion and respect without exerting dominance, for we do not own our Mother. 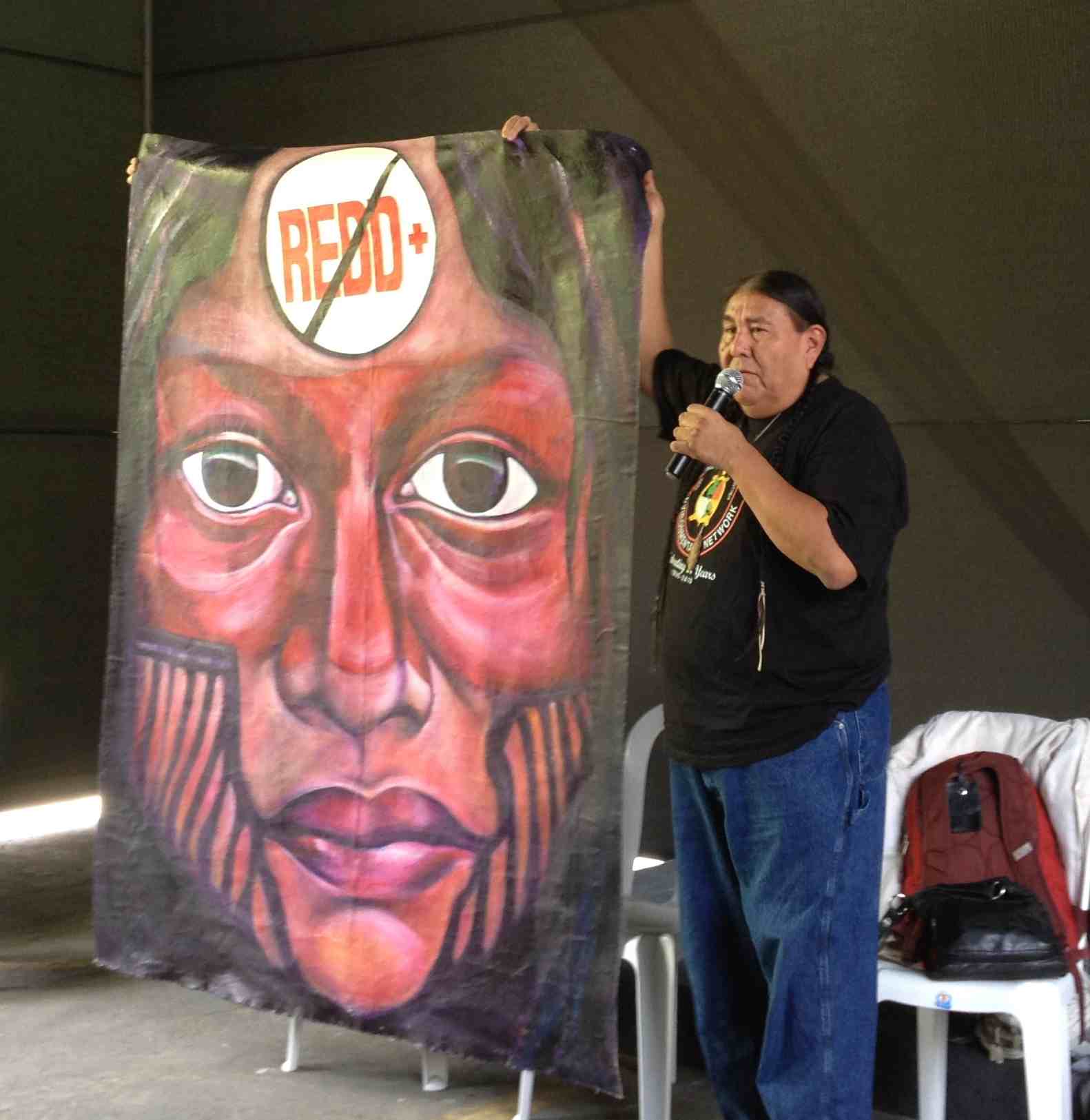 After the report we had a strong address by our member Tom Goldtooth of Indigenous Environmental Network about REDD+ (Reducing Emissions from Deforestation and Forest Degradation) and the consequences that this devastating false solution is presenting to all of us. In his words he told us “the deceptive climate ‘solution’ being proposed for California and the rest of the world from the horn of Argentina to the tip of the Artic in America and in all the other continents in the world, this false and dangerous solution is already being implemented within the UN climate negotiations and the World Bank. It sounds good on paper, but the reality is that REDD enforces the global colonization of Mother Earth; allows the polluting industry to expand its toxic emissions creating local toxic hotspots in faraway places; and creates a stolen future for Indigenous peoples, local forest dependent communities, communities living next door to a fossil fuel polluting industry, and a stolen future for the environment and all life. This is another scam by the capitalists and neoliberal governments run by the transnationals and multinational corporations.”

Many of us that were present at the tribunal are still in shock from the statements, stories and crude realities of each of the victims, and also the opinions, knowledge and passion of the experts.

Stay tuned for Part 2 of Dania’s report from Lima