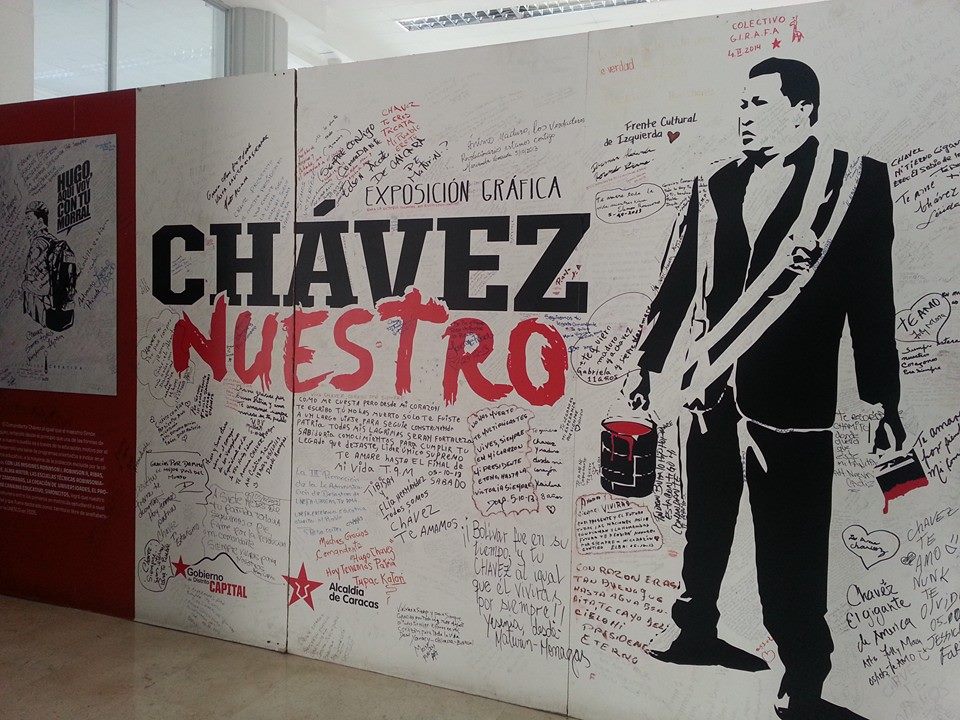 I arrived last Wednesday in Caracas, during the peak of Venezuela’s right wing protests. Responding to the call for a “salida” by the opposition leader Leopoldo Lopez, right wing students took to the streets burning educational and public institutions. The right is co-opting the “salida” – what was once a form of peaceful protest practiced by the left social movements against the dictatorial government of the past. I heard protesters banging on pots and pans out in the streets [a common form of protest by the right in Venezuela during the failed coup against Hugo Chávez Frías in 2002].  Relatively few people came out to protest but the next day they had murdered 3 people including a compañero from the 23 de enero collective, a historically militant and left collective in Caracas.

The next day I paid my respect to comandante Hugo Chávez at the cuartel where his body lies, and stopped by the 23 de enero to witness the funeral ceremony of the compañero who was killed by Wednesday’s protest. The community members were outraged both by their loss and the continuing violence that was being inflicted by the right throughout the country during the commemoration period of Chávez [one year after his death] and celebrations honoring the youths historic contribution to the revolution. As usual the US corporate backed media were reporting straight out lies that those who died were either from the right or cubans who died a long time ago that the Maduro government was trying to frame as recent deaths.

Despite the violence, tens of thousands of people marched the streets of Caracas on Saturday responding to President Maduro’s call for peace, reaffirming that the Venezuelan people’s support for the revolution was strong and that they wont be instigated into the right wings desperate attempt to destabilize the country. In fact post Maduro’s election and Capriles’s loss the right has been divided, and Leopoldo Lopez who instigated this protest is one of the many who are vying to take leadership inside the divided right. Some see this as his attempt to raise his profile as a leader.

Nonetheless within the last week the protests have settled down and on Tuesday, Leopoldo turned himself in.  Except for places like Merida, Tachira, and Lara where the right has political control and some parts of Caracas where the bourgeois class is concentrated, peace has settled in once again in the plazas and many supporters of the Bolivarian Revolution have taken the streets participating in cultural events to reclaim public space.

NOTE: Sunyoung wrote this report on her phone in the midst of a hectic delegation, and had to head off to interpret for the Korean social movement delegation she is traveling with. Part 2 coming soon once she gets back from the streets…