Grassroots Internationalism is a core element of JFREJ’s Strategic Vision. This means tying domestic issues to their international causes and effects, starting with the local and linking it to the global. It requires mutual solidarity, forged over time between “front line” communities around the world who are suffering from the effects of oppressive global systems.

In May 2016, the two of us had the honor of representing JFREJ at the first ever Feminist Organizing School (FOS), hosted by Grassroots Global Justice Alliance (GGJ) in Albuquerque, New Mexico.

When JFREJ joined GGJ this past year, we became part of a powerful network of grassroots organizations working around the country to build power for workers, low-income communities, and communities of color. Attending FOS gave us an incredible opportunity to meet, learn from, and build with folks, similar to us, who are organizing around racial justice, worker rights, immigration, demilitarization, and environmental justice issues within their local communities.

It also gave us a glimpse into some incredible movement-building that’s happening through an international feminist action network called The World March of Women (WMW). The WMW connects grassroots groups around the world who are working to eliminate the root causes of poverty and violence against women, with membership in over 65 countries. Grassroots Global Justice Alliance is the national coordinating body for the U.S. Chapter of the WMW, connecting its grassroots members,many of whom are our longstanding partners (like CAAAV, FIERCE, Make the Road NY, and Community Voices Heard), to global struggles. While the WMW began as a campaign against poverty in 2000, it now organizes around four key action areas: Peace and Demilitarization, Women’s Economic Autonomy, Common Goods and Public Services, and Violence Against Women.

When we arrived in Albuquerque, we went straight to an action organized by theSouthWest Organizing Project (SWOP), an organization born out of the Chicano movement of the 1970s, directed at the Governor for putting corporate interests before education and childcare for New Mexican youth. It was a beautiful entry point for us into the organizing that’s happening on the ground in one of the poorest states in the country, led by multiple generations of organizers who have been fighting for racial justice, voter rights, and food sovereignty in their community for over 35 years. 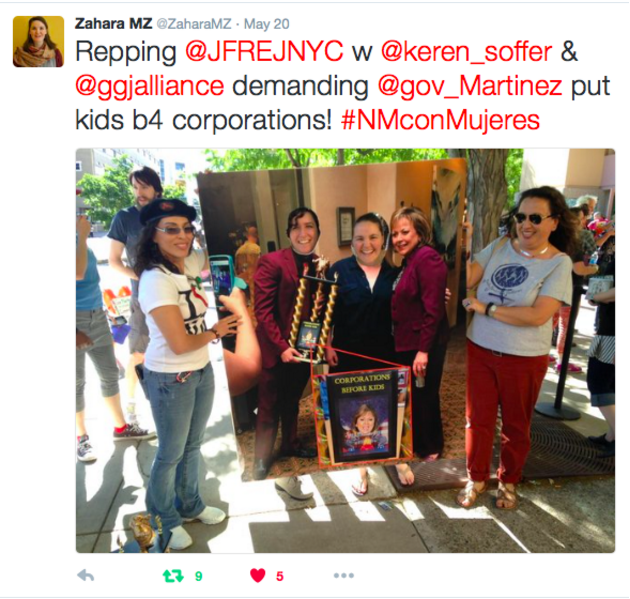 Overall, the goals of the Feminist Organizing School were to build our shared analysis around the critical connection patriarchy has to colonialism, imperialism, capitalism, and white supremacy on a global scale. All of this was framed for us through the story of Berta Cáceres, one of the leading indigenous feminist organizers in Honduras who stood up to mining and dam projects spearheaded by her government and transnational corporations. After facing death threats and repression for her organizing through the Council of Indigenous and Popular Organizations of Honduras (COPINH), Berta was assassinated in her home this past March. She served as a symbol for everything we learned over the next four days about the kind of grassroots feminist and internationalist movement that is currently being built — one which honors Berta’s legacy, connects the struggles of women of color, working class women, and queer and transgender people in the U.S. to those around the world, and acknowledges the role the U.S. and other imperialist nations play in creating the conditions of poverty, exploitation, and climate devastation that exist in the Global South. The U.S. Chapter of the WMW has since taken up a Justice for Berta Cáceres Campaign to organize U.S.-based groups around her story and the intersecting struggles it represents. 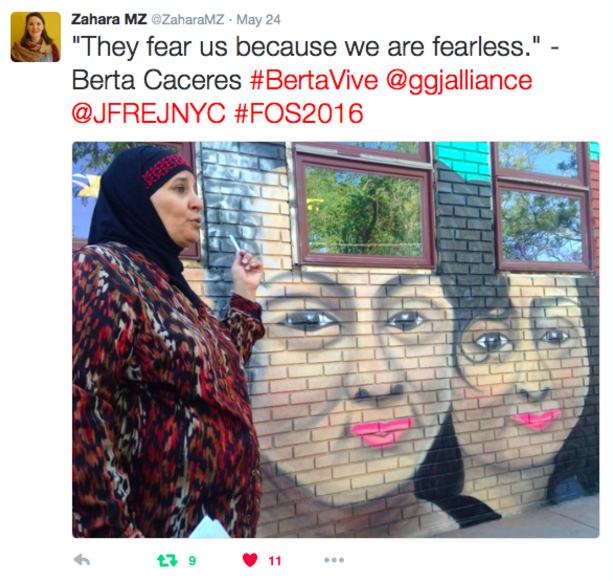 We ended our time at FOS at the Albuquerque Center for Peace and Justice, where a mural of Berta, along with her daughter and mother, is currently being finished to honor her legacy.

For us, the Feminist Organizing School served as such a beautiful example of how meaningful political education can be in building consciousness around the roots of our collective struggles, and the power of bringing that knowledge back to our members as an organizing tool.

It’s also exciting for us to imagine what’s possible in this next period of JFREJ’s history as we build our framework for Grassroots Internationalism after 25 years of local work. To begin, we are already centering the vision of Jews who are ourselves on the local and global “front lines” of resistance to racism, colonization, displacement, and erasure, namely Jews of Color and Mizrahi and Sephardi Jews. We strive to resist white supremacy, capitalism and other forms of structural oppression within our own work, our movements, and our Jewish communities, as well as in the world around us. We believe that this will lay crucial groundwork for the re-emergence of a strong Jewish Left, rooted in our diasporic histories, aligned with our allies, and defiantly hopeful for the future.

We invite you to take this first step with us. Join us at the:

We can begin to build those relationships and connections by showing up! Watch this video from Democracy Now for more information about Berta and her legacy.