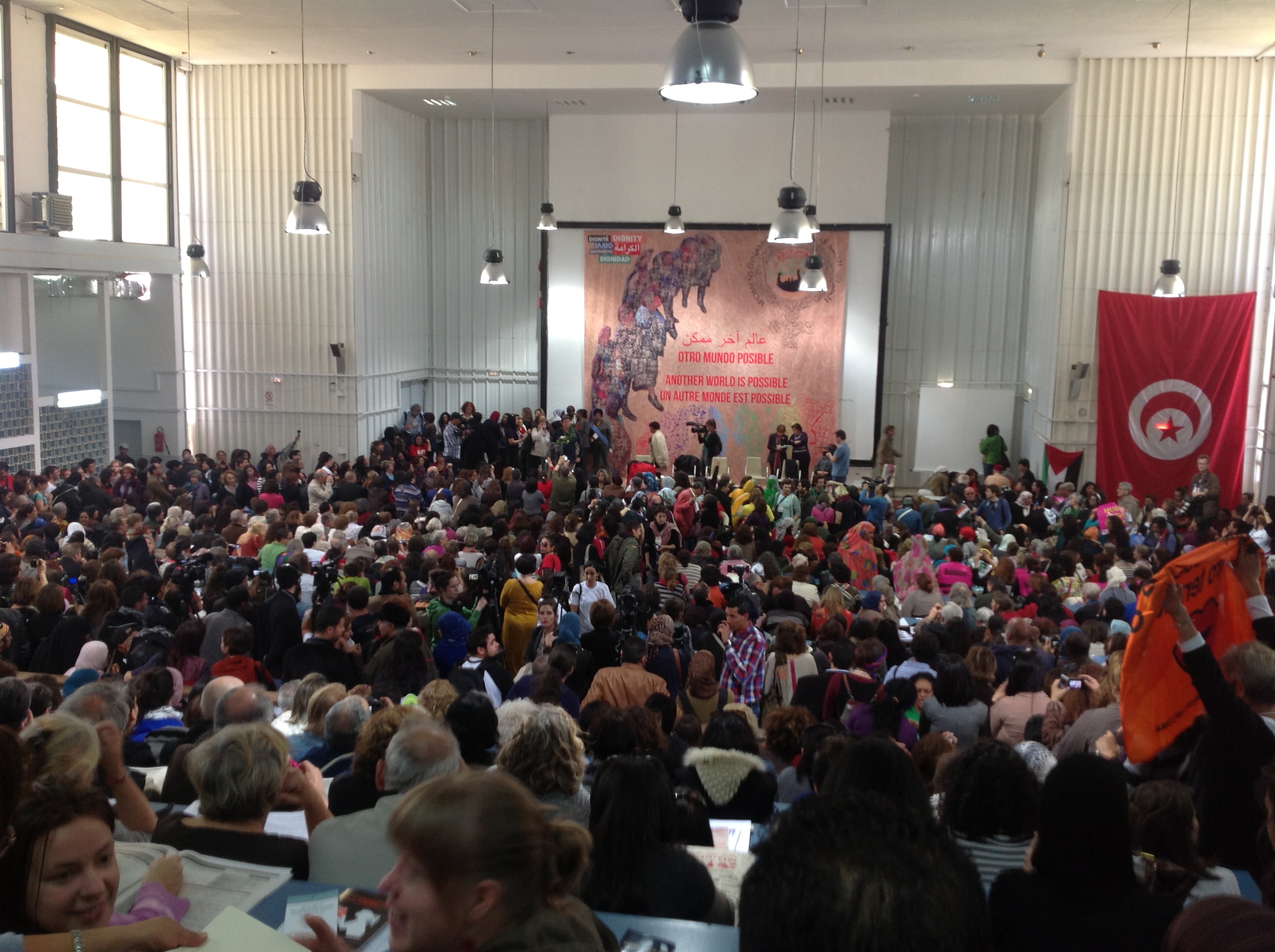 “Sol-Sol-Sol – Solidarité!” was the chant from the crowd as the GGJ delegation squeezed into the packed amphitheater for the World Social Forum Women’s Assembly. The room was electrified by the powerful voices of women activists from Tunisia, all over the region, and the world.

The invitation to the Women’s Assembly reads, “we the Dynamic Tunisian Women of the WSF, call upon women from all over the world to come together to express our solidarity with all women in struggle and our rejection of unbridled capitalism and any model of development that objectifies us, marginalizes us, commits violence against us, abandons us to unemployment and precariousness, and excludes us from the centers of power and wealth.”

Most striking and beautiful was the diversity, and the spirit of unity. So many women from around the world, from different experiences and struggles, sharing this one moment of solidarity.

As we stood shoulder to shoulder with the crowd we were able to connect with many women from Tunisia. They were welcoming with open arms. Being here we can clearly understand that our struggles are shared, and we heard many common messages from the powerful speakers. We all want to be able to care for our families, We all want to have full participation in society and in the political process. We all want to be treated with dignity and respect.

A Senegalese delegate said, “If all women are not allowed access to the democratic process, then that is a continuation of colonialism. We need women’s organizations and institutions to organize women against these forces.”

Many of the speakers expressed how important it is for us to remember that the struggle for women’s rights can never be separated from the global fights for sovereignty, land rights, social and economic justice, and climate justice. We do not win any of these without the self-determination and equality of women.

We are dealing with the same struggle in the US. We are over 54% of the voting population, but are massively underrepresented in elected leadership. Efforts to marginalize women and reduce their power and influence in democratic process is one of the many faces of patriarchy around the world.

We must continue to fight for the full participation of women in the democratic process, equity in the workplace and sovereignty over the land and resources of mother earth.

It was not an accident that the Women’s Assembly helped to open the World Social Forum in Tunisia. The WSF is an important spotlight for the women of Tunisia and the region, and their role in the ongoing revolution is critical and a powerful example for GGJ and our own organizing back in the United States.

Another World is Possible (especially if women lead the organizing!)