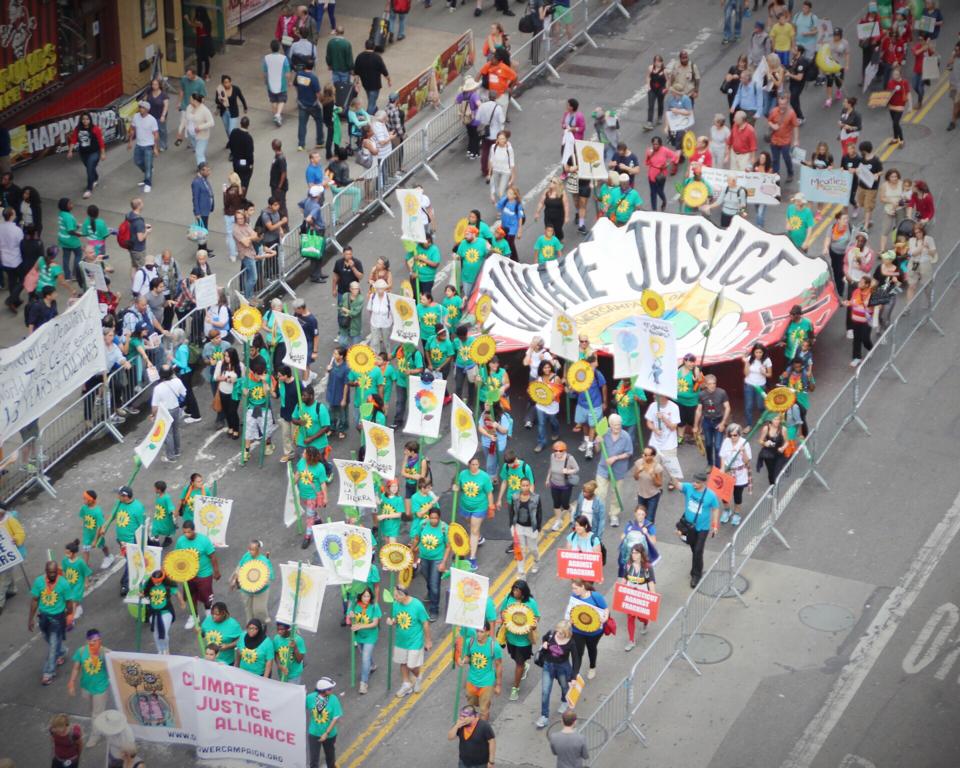 It takes roots to weather the storm, and these roots stretched across most of Manhattan on Sunday for the People’s Climate March (#PeoplesClimate). They then filled Wall Street with creative action and connected globally though discussions in auditoriums on Monday with the People’s Climate Justice Summit, and today will be holding a People’s Tribunal at the Church Center of the United Nations.

CLICK HERE TO WATCH LIVESTREAM of the People’s Tribunal from 10am-5pm Tuesday Sept 23.

Members of the Climate Justice Alliance (CJA) brought thousands of people to participate in the 400,000 person march on Sunday, and hundreds are staying through Tuesday for the People’s Tribunal, to deliver a message to the United Nations that they are not taking the action frontline communities desperately need.

The Summit kicked off with powerful and clear testimonies of how the UN’s climate “action” is in contrast to what the people want and are building through the #OurPower Campaign. We say yes to climate justice, to indigenous rights, to food sovereignty, to public transportation, to zero waste systems, and to a just transition to the next economy. We see through the UN’s false promises and say no to biofuels, no to big dams, no to GMOs, no to climate-smart agriculture, no to the XL pipeline, and no to REDD (Reducing Emissions from Deforestation and forest Degradation) and carbon trading in all its forms.

CLICK HERE to read a statement from over 330 organizations representing over 200 million people around the globe calling for the right kind of Climate Action, which is not the kind the UN is taking.

In the opening panel of the People’s Climate Justice Summit, speakers were in consensus about rejecting the financialization of nature, but the question arose: might we need to use pieces of this approach to keep corporations accountable or to protect natural resources? Maureen Santos from Henrich Böll Foundation in Brazil points out that it is possible to give value to parts of nature we want to preserve, but that the real danger lies in the marketization of aspects of nature and making them into tradable assets.

Other panelists and participants came from France, India, Peru and elsewhere. “It’s time to stop colonial rule and it’s time for a systemic approach led by affected peoples,” says panelist Meena Rahman of the Third World Network – India. She also suggested that as a Climate Justice movement, we could do more to build with groups that are countering bilateral trade agreements and other parts of Trade Justice movements.

In discussing mobilizing approaches for future global climate justice actions in Lima, Peru (December 2014) and then in Paris, France (December 2015), panelists and participants debated tactics used here in New York and elsewhere. This theme continued into the next panel in the summit. Christophe Aguiton of ATTAC France, encouraged us to continue to build “broad alliances including grassroots groups and large NGOs by looking at targets and finding common agreements such as reducing emissions and not holding responsible the global south for the emissions of the north, but also being intentional around the controversial points. These include the push for binding agreements and accepting the market mechanism.” The latter brings into light important questions of targeting corporations and understanding incinerators, nuclear power plants, agrofuels, big dams and other supposed alternatives to fossil fuels as false promises, not solutions, each with devastating effects on our communities and the planet. 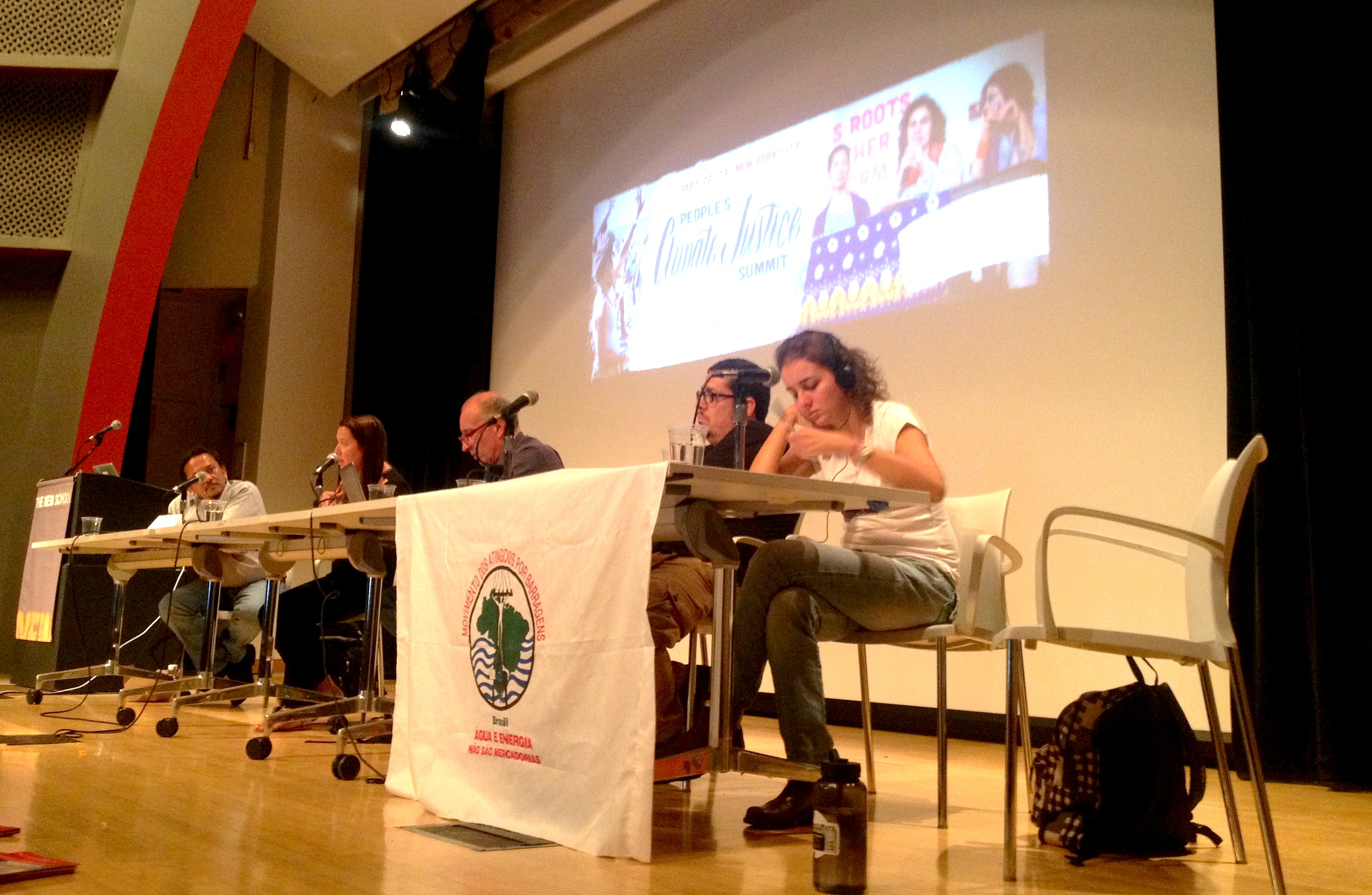 Ananda Lee Tan of Global Alliance for Incinerator Alternatives moderated the next panel on “False Promises: Dams / Waste to Energy / Federal Policy” and discussed creating trans-local networks. It also included Elisa Estronioli from the Movement of People Affected by Dams (MAB) – Brazil, Jorge Tadeo Vargas from Revuelta Verde – Mexico, and Ana Baptista of the Ironbound Community in New Jersey. Local movements from rural Brazil to urban New Jersey are realizing their struggles are not just against dams and incinerators, but are connected by common desires to completely transform the extractive economy and are joining up in Climate Justice organizing. They also share similar paths for local self-determination in the form of creative community-controlled energy, zero-waste and agro-ecology projects.

Moderated by Mamadou Goita of IRPAD Africa, a third panel explained how “Climate Safe Agriculture” – as corporations and the UN are promoting – is essentially bringing farmland into the reach of corporate-led carbon offset programs. This threatens communities and the planet since it takes the form of continuing the technological “fixes” of the so-called green revolution. It deepens the research and implementation of practices that are profitable for corporations such as patenting seeds and genetic modification of foods. Social justice is also an emphasis of the climate justice movement and a strong theme running throughout this summit. “Food sovereignty means addressing racism and working for racial justice” by Sara Mersha of the US Food Sovereignty Alliance. 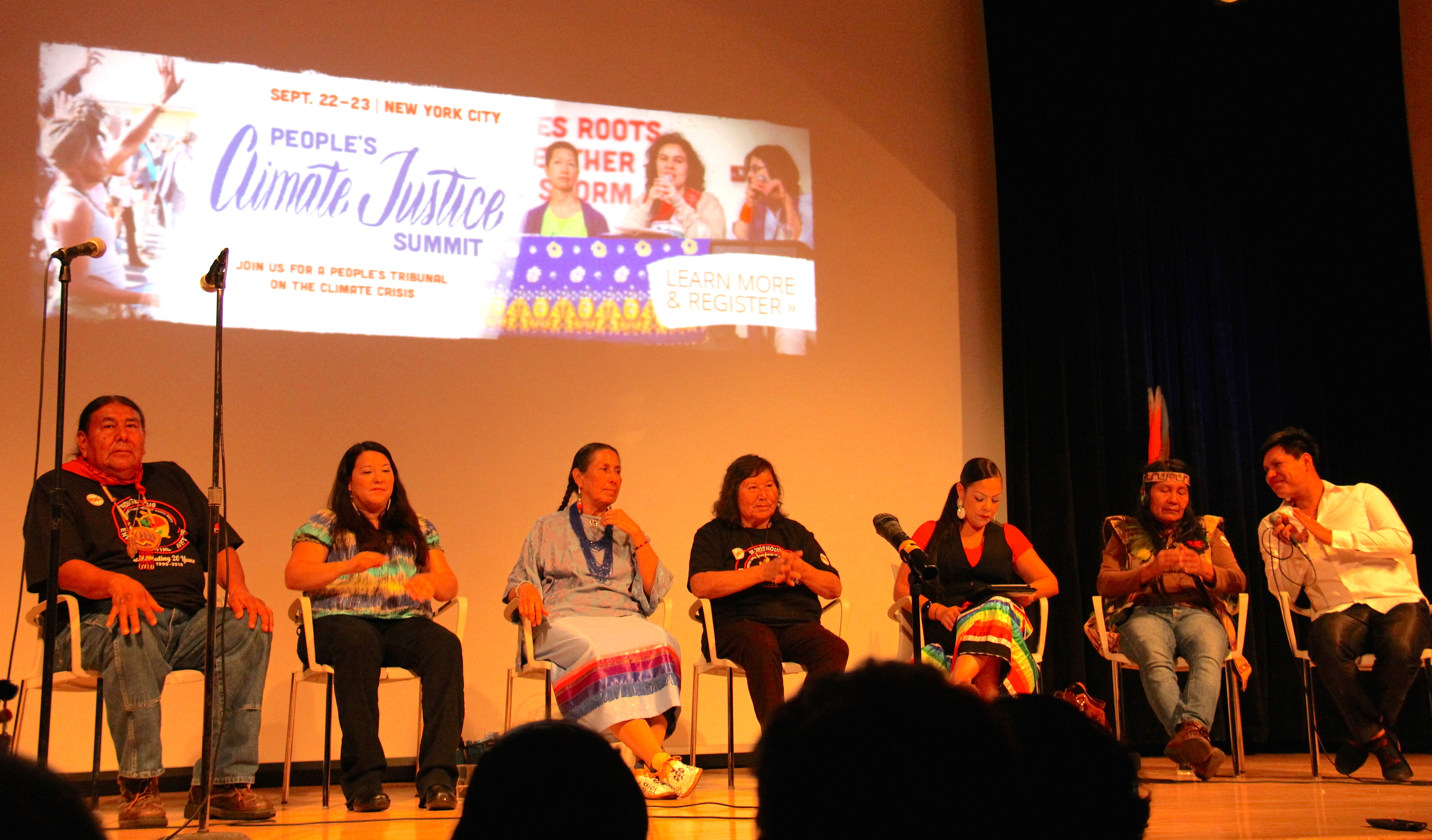 Roberto Nutlouis, a Dine (navajo) leader from the Black Mesa Water Coalition, reminds us of the younger roots that we need to nurture to weather the storm: “We need to stop treating youth as the leaders of tomorrow. We need them now and we need to make space for them to get equipped to be leaders in our movements today.”

The climate crisis is a symptom of a deeper problem. The extraction economy must go. This economy that benefits a few at the expense of communities and the planet is being transitioned out. Today at one site of the People’s Climate Justice Summit, we discuss building community resilience through a just transition and the creation of grassroots, living solutions and systems change. Simultaneously, we will hold a People’s Tribunal to make a judgement on the Climate Action that the Ban Ki-Moon Climate Summit is proposing. 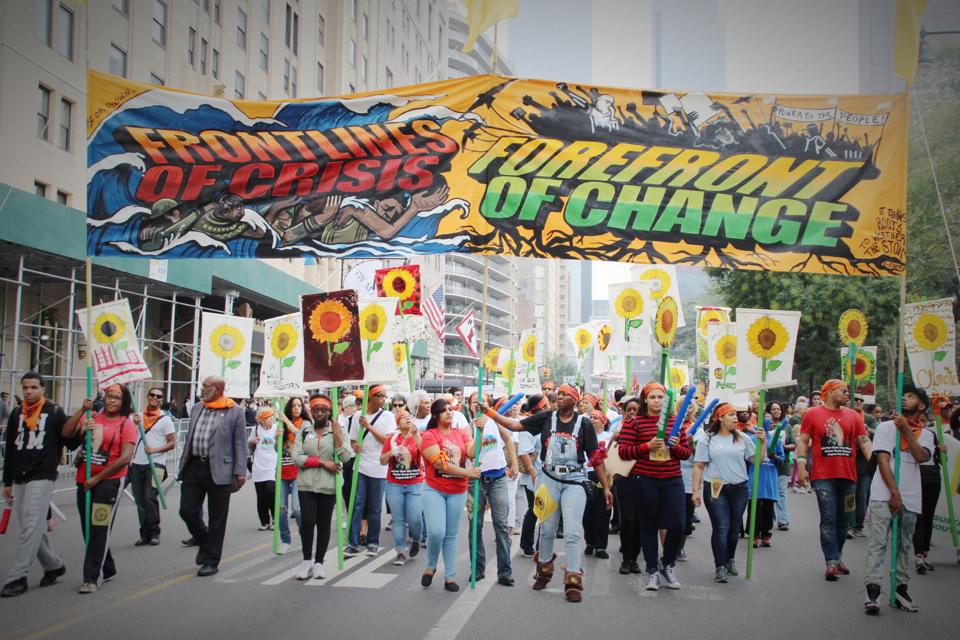