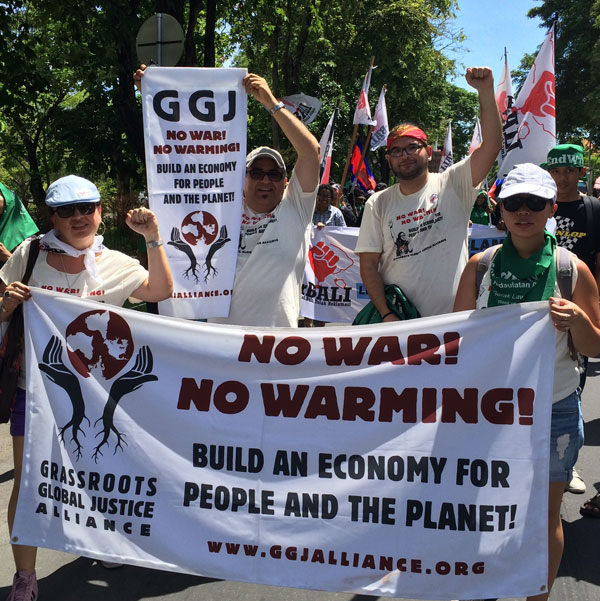 The week of action to End the WTO in Bali was truly a historical moment; we were up against the pillars of rampant greed and destruction. It had been 14 years since the Seattle WTO meeting and along the way we have been persistent in the fact that globalization has only brought us misery and despair. While we were in Bali, our delegation witnessed the atrocious “Bali Package” come into affect, which will have severe impacts on communities across the world.

The “Bali Package” Jeopardizes our Future

“Today, the WTO tries to revive itself and bring back credibility to its delegitimized institution, by producing a Bali Package that jeopardizes our future.” said Cindy Wiesner, National Coordinator of Grassroots Global Justice Alliance. “It takes away our right to food sovereignty by limiting agricultural policies and tying our hands into an expansive Trade Facilitation deal.”

The “Bali Package” was what the WTO meeting in Bali boiled down to, and while many countries were originally blocking the package, we saw them fall under the pressure of capitalism. Some countries were offered to be the new strategic sites for the war on terror and security hubs with new military bases and infrastructure enticements.  Others were just offered to be the new and improved product assembly nations for the developed nations. Nothing was off the barter table, not even ending the embargo on Cuba. The alarming agreement on Trade Facilitation makes it easier Transnational Corporations (TNCs) to maximize their profit and opens trade borders in all member countries except Cuba, reinforcing the 60-year long US blockade against Cuba. For the majority of the meetings, Cuba and other countries in the Latin American bloc held a strong veto against the Trade Facilitation Agreement as they pushed for a challenge to the US embargo. In the end, an empty clause was added to the declaration and Cuba dropped the veto, but the reference to the non-discrimination principle of Article V of the GATT (General Agreements on Tariffs and Trade) is not written into the Trade Facilitation agreement and remains pure rhetoric with no promise of ending the blockade.

From the start of the talks India held international attention as they pushed to protect their food subsidy program that feeds over a third of the nation.  However after multiple negotiations they ultimately accepted a peace clause and allowed the agreement to go through.  With the restrictions and rules applied, the peace clause essentially only applies to India and is not an option for developing countries.  It is also only a temporary solution with vague promises for a longer term solution in future negotiations.  “This peace clause is nonsense simply because no country should have to beg for the right to guarantee the right to food. Food and agriculture should never have been included in the WTO in the first place,” say SMAA, Gerak Lawan, La Vía Campesina and global allies in a December 7th statement.

The countries blocking the package succumbed to the pressure at the final hour. A “Bali Package” deal was reached and for us our work just doubled in magnitude and became more entrenched. It was as shameful as usual to see the US government’s role in the “Bali Package” was that of arrogance and bullying.

Rice Does Not Offset Pollution

GGJ also supported our indigenous partners from North America highlighting the issue of the California and Chinese alliance on REDD+ and their recent and ongoing attempt to make rice the new carbon commodity. “Mother Earth is the source of life which needs to be protected, not a resource to be exploited and commodified as a natural capital. In Bali, IEN lifted newly found information of the inclusion of rice cultivation in the carbon market system,” says Tom Goldtooth, Indigenous Environmental Network.

Over 77 Indonesian and worldwide organizations endorsed the No REDD Rice Manifesto in Bali:  “Since 2007, the United Nations, World Bank and fossil fuel polluters like Shell and Chevron and mining company Rio Tinto, have been pushing a carbon trading regime called REDD (Reducing Emissions from Deforestation and Degradation). REDD uses agricultural land, soils, forests and tree plantations as sponges for greenhouse gas emissions. Now these climate polluters want to use rice as an offset for their pollution instead of reducing emissions at source. Market-based solutions for addressing the climate crisis are a false solution.” We must stop this Franken Rice in its tracks. Read the No REDD Rice Manifesto

Up Next: Stop the Trans-Pacific Partnership (TPP)

The neo-liberals are now setting their sights on the Trans-Pacific Partnership (TTP) as the next trade agreement (scam) to be discussed and ratified in Singapore at the beginning of 2014. This trade agreement brings together Australia, Brunei, Chile, Canada, Japan, Peru, Taiwan, Malaysia, Mexico, New Zealand, South Korea, Singapore, Vietnam and the United States. This agreement has for the most part been worked out in private talks, but stands to be an agreement that puts forward even more liberalized trade that further threatens our global environment and living condition. On December 3, protests against the TPP were held in cities around the US and 46,000 signatures were delivered to the US Trade Representative in DC after Wikileaks released the TPP’s chapter on intellectual property, which revealed far-reaching and damaging effects on everything from civil liberties and internet privacy to biological patents and copyrights.

GGJ participated in Bali to show that even within the belly of the beast there is resistance. The approval of the “Bali Package” makes our work even more urgent. We resolve to keep up the fight alongside movements around the world.  GGJ delegates were inspired to witness the historic founding of Social Movements for an Alternative Asia (SMAA), a testament to the growing convergence and continental collaboration taking place across Asia. In Bali the youth were instrumental in showing our collective resistance with leading direct actions, marches and workshops on the impacts that globalization has on young people.

Many of our partners in the global movement for economic and human justice have shown us that another world is indeed possible. We were able to connect and reconnect with many of the key organizations that are combatting massive global exploitation. We met with hundreds of people that are doing work with grassroots organizations, farmworkers and peasants, women’s cooperatives, immigrant rights, and youth. We learned a great deal about our Asian sisters and brothers’ reality and the day-to-day struggles that unite us all in striving to make another world possible.

Our delegation came to Bali with a strong understanding that there are economic alternatives to the ones playing out in the governmental negotiations, and we return from Bali with the resolve to keep up the fight.

“The WTO trade ministers are celebrating the WTO Bali Package… Our fight is not over. We must continue to organize to declare the WTO and all bilateral and regional trade partnerships as illegitimate… The WTO has abused its legal mechanisms to constrain the self-determination, sovereignty and rights of Indigenous peoples to develop our own policies for our communities and in harmony with our responsibilities to the natural laws of Mother Earth. We want a world without the WTO. No matter how you reform the WTO or improve its agreements, it will never be fair or just, as it is built on the principles of capitalism, free trade, endless growth and the exploitation of people, Mother Earth and all Life.”—Tom Goldtooth, Indigenous Environmental Network

“We reiterate our call for an End to the WTO and the tyranny of the free trade regime. We redouble our efforts in fighting the system and pushing for the peoples’ alternatives. We will continue our struggle to achieve a world without the WTO and free trade agreements and in its place have an Economy for Life.”—SMAA, Gerak Lawan, La Vía Campesina

“With our common problems, aspirations and struggles, we resolved to strengthen our unity as Indigenous Peoples and link our struggles with various democratic sectors and organizations worldwide until our right to self-determination and liberation is achieved.”—Declaration: The WTO and Indigenous Peoples