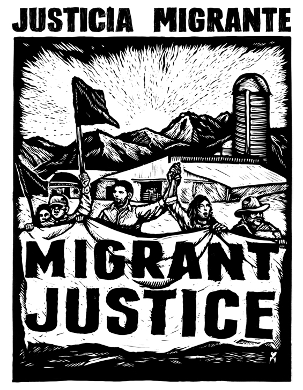 Migrant Justice emerged in response to critical issues affecting migrant dairy farm workers. Interviews with workers during 2009 and 2010 led to a participatory education project in which teachers and students in 10 Vermont High School Spanish Classes heard personal stories of hardships and lack of freedom shared by their invisible neighbors. The interviews, translated by students, are now available on our website as part of a package of educational resources.

The actual catalyst for launching Migrant Justice came with the tragic death of a young dairy worker, José Obeth Santiz Cruz, on December 22, 2009. Migrant Justice organized the return of his body to his village in Chiapas, Mexico and documented the complex interdependencies between Vermont agriculture and this largely invisible community. This project ended with the production of the documentary film Silenced Voices and a state-wide tour drawing large audiences and widespread media coverage helping to raise awareness about the plight of farm workers and developing a solidarity network called the VT Migrant Farmworker Solidarity Project. Since then, we have transformed a project into a membership organization through monthly farm worker community assemblies to build a 12 person, all Spanish Speaking coordinating committee that includes 7 dedicated volunteer migrant farm worker leaders, 3 volunteer organizers, and 2 half-time organizers.