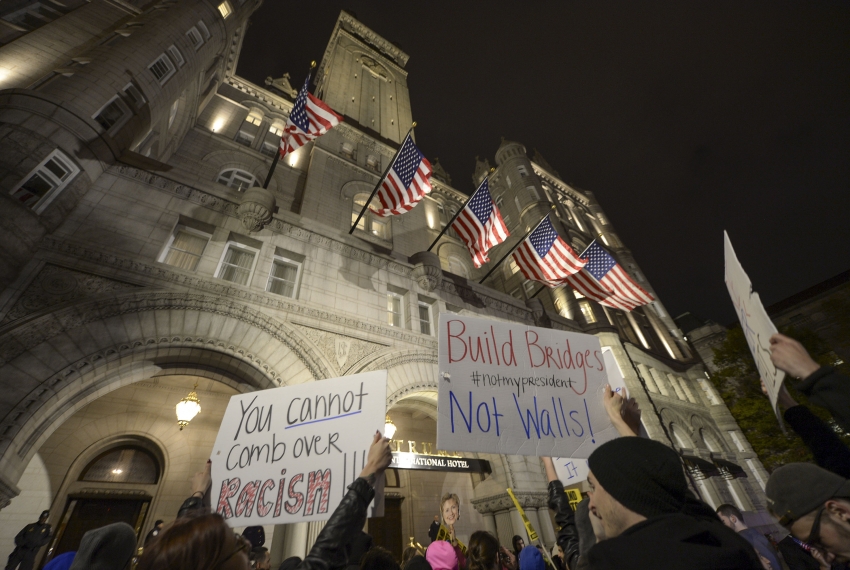 By Kate Aronoff for In These Times

In the wake of Donald Trump’s upset victory over Hillary Clinton, In These Times asked organizers who have worked in the climate, racial justice, immigrant rights and other movements for their reactions and their ideas on what comes next. Here’s what they said.

“I am still working on getting my bearings, but one thought kept running through my head last night: we need to move through this period differently than we did during the last moment of ground-shifting rollback for the left, after September 11th, 2001. I was a young organizer then, part of an emergent youth movement in California that was finding our momentum together with poor peoples’ movements that had grown up in response to the cuts to welfare, the anti-globalization movement that had just shut down Seattle and community organizations resisting gentrification. We were on an upswing, and we were starting to have real impact. And then the planes hit the towers, and everything changed. We got scared, rightly so. We turned inward. We lost faith in the people of the country, and we turned away from them. And now—in the wake of a period where we were finally once again gaining real momentum—we are facing an even bigger challenge, and we need to make a different choice.”

“We need to defend our brothers and sisters who will face real and growing dangers: Muslims and immigrants and queer people and Black people. And we need to deepen our faith in all of the people of this country, including the white communities that voted for Trump, recognizing that people are scared and suffering for real reasons. We need fight like hell to help all of us make a different meaning out of that pain.”

“We can spend the next 4 years belaboring the point that Bernie Sanders could have beat Trump, or we can stay steady on our course and continue to organize for the things we were so close to getting.

Now is the best time to purge the Democratic Party of its worst actors and gear up to win some very important races in 2018. If we believe Trump will oppose the passage of TPP, then we must make sure he knows that we will hold him accountable to his words. Hillary Clinton and The DNC must take full responsibility for the failures of her campaign. Don’t blame us, we’re out here organizing for justice. Kicking ass for the working class.

Black, Brown, Yellow and Red Lives matter, and it’s time that the White-led Left give way to a new Left led by people of color. This is not up for debate. This is a demand.”

“My heart physically hurts for people of color, for women, for any vulnerable demographic, for the planet and future generations. Today’s America chose intolerance—I can only hope those who seek progress, equality, and understanding stand strong, together.”

“We are living through an enormous amount of pushback to a bold, inclusive vision that would prevent true climate catastrophe. It is fueled by a fear that the status quo will change. We know that to preserve a livable future on this planet, it must, and so we will find new ways to build the climate movement here and around the world.”

“At the COP22 climate summit in Marrakech, people are stunned: some in tears, some in uproar, some in strategic huddles. What does it mean for climate justice politics that a man who has argued that climate change is a hoax cooked up by “the Chinese” is about to become president of this declining hegemon, the U.S.?

It means two things: first, that global governance as we know it—as a U.S.-led set of more or less neoliberal institutions that sometimes, just sometimes do decent stuff—is over. Second, that the rest of the world has to step up: Movements everywhere have to redouble their efforts to shut down every coal-mine, every oil-refinery and every coal-fired power plant there is. The progressive movements in the US will have enough fights on their hands as it is. If we are to show our solidarity with them, let’s get our act together, and enforce climate justice from below. The attempt to do so from above is now, as of this new 9/11 (in the European way of writing the date), dead.”

“Trump is a reflection of where the US is at culturally and politically and just goes to show that the so called left needs to undo its relationship with centrist democrats.”

“The climate and vulnerable communities around the country and the world don’t have four years to wait. The path forward may be hard to see, but some things are crystal clear: We must unite like never before and we must fight like hell.”

“Donald Trump won because of racism. Donald Trump used an age-old lie to win: people of color and immigrants—my family and friends—are to blame for our economic insecurity. I’m sad and scared for the people I love, our democracy and our country.”

“Trump’s apparent victory requires both deeper resistance to a rigged global economy and political system and a real challenge to the structure and big money orientation of the Democratic party.  Our Revolution, the successor to the Bernie Sanders campaign is prepared to do both.”

-Larry Cohen, Board Chair, Our Revolution

“Over the past year and half, our social movements have put their bodies on the line to disrupt racism, misogyny and xenophobia. We have always elected to organize and will continue by lifting up our demands and vision for change. There are millions of fearless Women, Black, Latina/o, Indigenous, Muslim, migrant, queer, trans, working and poor visionaries that are yearning and are building the world that we deserve: one where our dignity, self-determination, and relationships to each other and Mother Earth are paramount. Grassroots organizing and the fight back are the key ingredients to ensuring we live in an inclusive democracy.”

“My immediate reaction is that we cannot give into sectarian impulses in this moment. A debate is emerging on the Left about whether or not Trump’s victory was a result of failures within the Democratic Party (i.e. the sinking of Bernie Sanders’ primary campaign) or an alarming amount of racism and misogyny among the white working-class.

The answer is that both of these things can be true at the same time. A Trump regime offers perhaps the greatest opportunity for a united and massive progressive movement in U.S. history. However, it means that for the first time since the 1930s and 1940s, progressives need an actual synthesis of the ways race, class and gender function in America today.”

“In the moment of great despair, sad ears are receptive to messages of hope. They don’t believe; they dismiss. But they listen. And in moments like these it’s okay to sound crazy, to promise the impossible. And to demand the impossible. No effect in the short run, but the seeds are sown.”