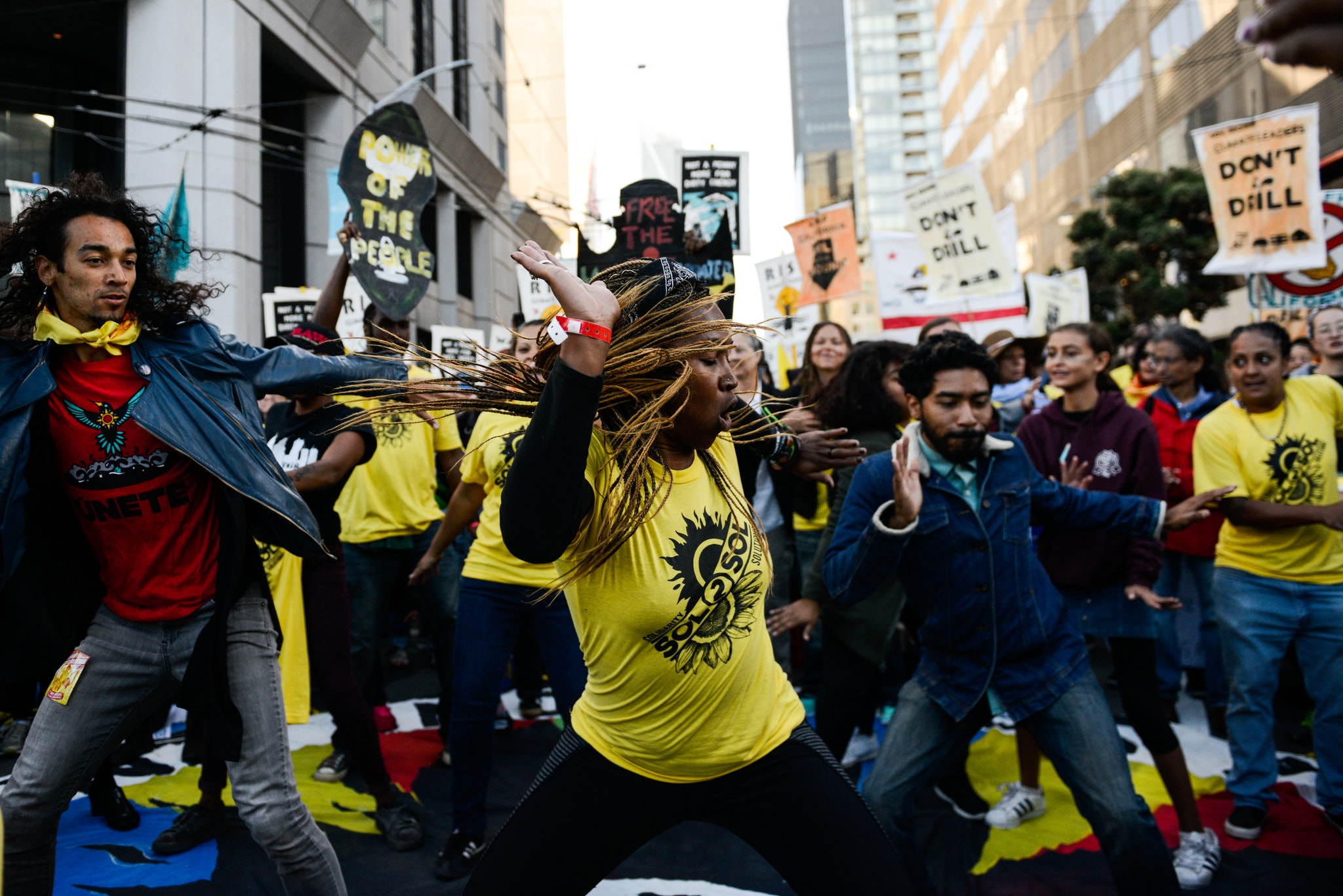 SAN FRANCISCO — They erected a mini oil rig, locked arms through oil drums and sat down on the street. “Keep it in the ground,” their banners read. “No more fossil fuels,” they chanted.

Protesters gathered at the Global Climate Action Summit on Thursday morning as mayors, ministers, environmentalists and corporate executives poured into the Moscone Center conference hall. By 9:30 a.m., only one entrance was open, and a long line spooled out at another entrance, tightly guarded by the police.

The message of the protesters, who were mostly peaceful, was mainly directed at the California governor, Jerry Brown, calling on him to stop oil drilling in the state and protect residents who live close to oil facilities.

Cesar Aguirre, 24, a community organizer from Kern County in central California, said his neighbors suffered the health effects of oil wells and refineries. “They see the dirty air,” he said. “They know it’s getting hotter and hotter. They know what’s causing it.”

Governor Brown, who spearheaded the conference, bristled at the suggestion that he was too lenient on fossil fuel companies. “I would say without a doubt, California has the most aggressive green energy plans in the Western Hemisphere,” he told a group of reporters inside. “We’re doing a hell of a lot.”

Though largely peaceful, the protests Thursday disrupted traffic and a few arrests were reported.CreditMarian Carrasquero for The New York Times
In the morning, conference attendees circled the block trying to find ways to get inside the convention center. Some shrugged at the inconvenience. Others commended the protesters for putting pressure on the leaders inside.

“The message that I hope comes across is that you have citizens who care about climate change,” said Katie Walsh of CDP, a nongovernmental group that helps companies and others measure their carbon impact.

Another delegate, Deborah Knuckey, who described herself as an activist, called the protest “counterproductive.”

The Associated Press and local television stations estimated the crowd at several hundred people. The protests were over by midday.

Mr. Brown wasn’t the only target, though.

At one point, inside the conference, protesters interrupted remarks by Michael R. Bloomberg, the former New York City mayor, shouting “the air is not for sale,” according to a report by Bloomberg News.