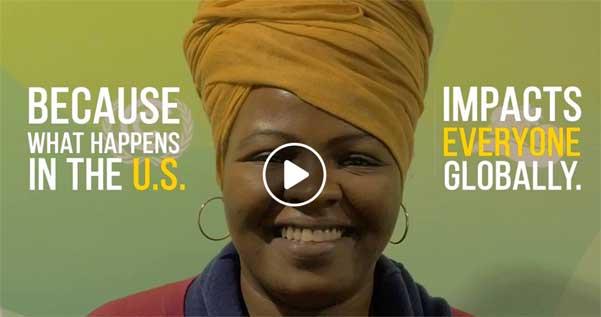 Grassroots Global Justice was honored to help coordinate an incredible delegation of grassroots leaders to COP23.  Click here to see the powerful wrap up video made by Indigenous Rising Media.

Here are a few highlights:

We overshadowed the White House Dirty Energy Panel with an Indigenous, Black, and Latinx Water and Land Ceremony

On November 13, 2017, The Trump Administration will held it’s only event, “The Role of Cleaner and More Efficient Fossil Fuels and Nuclear Power in Climate Mitigation”, at the UN Climate Talks (COP23) to promote coal and nuclear as a solution to climate change.   In response, Indigenous Peoples from across the world and frontline leaders from Mississippi to Puerto Rico who represent both low income communities and communities impacted first and hardest by climate change, led a demonstration of song and prayer at the White House event to send a clear message: Keeping coal and nuclear in our energy mix is in complete contradiction to any meaningful climate action plan. The promotion of coal and nuclear power by the United States has serious global impacts and is not an acceptable solution to mitigate and adapt to climate change.  We then joined with allies from SustainUS who disrupted the White House panel with song and marched out to join the frontline movements in a speak out.

We confronted CA Gov Jerry Brown at the America’s Pledge event asking–Still in for What?

From refusing to ban fracking to letting oil companies dump toxic waste into underground water supplies, Governor Brown promotes policies that incentivize oil and gas production in the state. His cap-and-trade extension includes provisions written by oil lobbyists that prevent state and local agencies from directly limiting carbon emissions from oil refineries. He has also failed to shut down the Aliso Canyon natural gas storage facility, where the largest methane leak in U.S. history forced thousands to flee their homes in 2015.  We stood with frontline communities from California to Acre, Brazil calling on Governor Brown to ban new drilling and fracking, phase out fossil fuel production, and commit to a just transition to clean energy for all.

We joined global allies in the Ende Galende Action calling for an immediate phase out of coal in Europe in order to Keep Fossil Fuels in the Ground!!

On Sunday Nov 5th–the day before the start of #COP23 in Bonn, Germany–4500 climate activists occupied the Tagebau Hambach, the largest open-pit coal mine in Germany–and the largest human made hole in all of Europe. The Action was named Ende Gelände which is not the name of the mine but rather the coalition of German environmental groups which formed in 2015 and means “Here and No Further.” They have shut down the mines more than once and will continue to do so until they shut the four RWE mines in the Rhineland region down for good. The #ItTakesRoots delegation was invited by the organizers to march along with La Via Campesina in the frontline of one of the marches on the upper level of the mine.

We supported IEN and CJA in releasing a ground-breaking report “Carbon Pricing” Report!!

One of the most important interventions at COP23 was the international release of a new report from the Indigenous Environmental Network and the Climate Justice Alliance, “Carbon Pricing Report: A Critical Perspective for Community Resistance”. This report provides in-depth context to why carbon market systems will not mitigate climate change, will not advance adaptation strategies, will not serve the most vulnerable communities facing climate change impacts and only protect the fossil fuel industry and corporations from taking real climate action.  The publication is the first of its kind to be released in the United States and will help frontline communities and grassroots organizations articulate crucial points to challenge carbon markets and climate change. It is a tool in building a carbon market grassroots resistance.

We lifted up the Just Recovery and Just Transition Campaigns from Puerto Rico and Mississippi to Zimbabwe and East Timor!!

We joined forces with La Via Campesina and Friends of the Earth International to bring global frontline perspectives of what Just Transition is looking like on the ground globally.   There are concrete solutions coming from social movements who are taking climate mitigation and adaptation into practice right now, including Katia Avilés-Vázquez from Organizacion Boricua who underscored our message, “To Trump we say, follow our example or get out of our way.”

Watch live stream from one of our workshops here.

the It Takes Roots delegation officially delivered the report entitled “Dam Violence: The Plan That Killed Berta Cáceres” to the Honduran government, which has yet to meet with the family and organization of the murdered leader since the report’s release. The head of the Honduran delegation, Mr. José A. Galdames, Secretary of State for the Ministry of Energy, Natural Resources, Environment and Mining received the report and invited the Campaign for Justice for Berta and the report’s authors to present it and testify in Honduran court.  The report is the result of a year-long independent investigation by the International Advisory Group of Experts (GAIPE) made up of specialists in international human rights law, international criminal law and comparative criminal law.  In addition to delivering this report, the daughter of the beloved leader, Bertha Zúniga Cáceres, joined a press conference by video of international land defenders at COP23 to denounce the state and corporate intellectual architects of the assassination of her mother, Berta Cáceres.

Read the summary of the GAIPE report here.