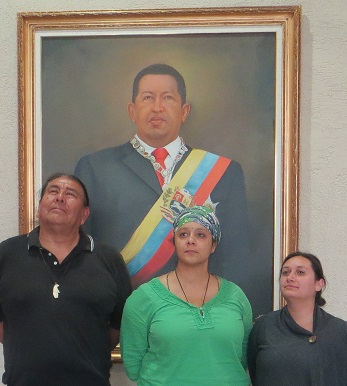 From July 15 to July 18, 2014 the Bolivarian Republic of Venezuela hosted social movement leaders and civil society members from around the world at La Isla Margarita for the International Preparatory Meeting for the Social PreCOP on Climate Change.  “The Social PreCOP on Climate Change is the first Worldwide Public Consultation proposing governments to sit together with social movements and organizations around the world to set the basis of an alliance between peoples and governments facing the threat that climate change poses today for humanity,” according to the Venezuelan government.

1. Deepen relationships with national and international groups that work to address the causes and impacts of climate change;

2. Deepen understanding among international allies of the ways that people of color, poor folks and Indigenous communities are negatively impacted by US-led domestic and international policies and practices;

This was the first in a series of meetings that will take place leading up to the UNFCCC COP20 (United Nations Framework Convention on Climate Change, 20th Conference of Parties) taking place in Lima, Peru December 1-14, 2014.

Tom Goldtooth explains the recent progression of social movement and civil society response to the UNFCCC: “At the recent Conference of the Parties (COP) of the world leaders in Warsaw, Poland in December 2013, frustrations and distrust lead to the walk out of civil society organizations from the Warsaw climate talks.  This raised awareness, and shifted the focus to mobilizing people and to send a clear message: ‘People and communities around the world are already implementing climate-safe, local energy alternatives, just transition and governments should listen to them and not to polluting corporations.’ This is the message of Grassroots Global Justice (GGJ), Climate Justice Alliance (CJA) and Indigenous Environmental Network (IEN). This message was also expressed in the Social PreCOP.”

Ife Kilimanjaro reports that at the Social PreCOP, “several key arguments were advanced:  1) Resource intensive industrial production organized by an unfettered profit-driven capitalist economic system, whose ruling class interests are protected by domestic and international laws that are enforced by military aggression is a cause of the current climate crises we face today.  2) What the United States is engaging in globally in Indigenous and people of color communities in the Global South (environmental destruction, climate destabilizing practices, resource and land grabs, and resulting population dislocation and health impacts), it is doing domestically among Indigenous, people of color and poor white communities.  3) Among African descendants of the brutal and destructive system of enslavement and the Indigenous communities whose lives and lands were stolen, this notion of historical responsibility has been fought for under the banner of reparations for many decades, but to no avail.  4) The United States, European nations and their children have played and continue to play a large role in migrations resulting from environmental degradation, land grabs and climate change. 5) Corporations have more rights now than people and Mother Earth (they even now have religious freedom!) and such rights are protected by governments in domestic and international policies.”

“As US organizers prepare for the UN Climate Meeting in New York City this September this meeting comes together at a critical moment within the international movement for climate justice,” says Diana Lopez, Executive Director of Southwest Workers Union. “Within in official UN international spaces there is always a lack of representation from the people most affected by climate change… And the reality is that there is a global south within the global north that is being left out of many international spaces. There is a strong force of people taking on climate change at the local level, building community owned energy, creating intergenerational community planning, and connecting the need to not only fight for environmental justice but also to address the economy, reproductive issues and governance.”

Follow @ggjalliance and @CJAOurPower at the Our Power National Convening August 6-9 in Richmond CA, and at the People’s Climate March and Summit September 17-24 in New York City.

Read Articles from the Venezuela Social PreCOP on the GGJ Blog: