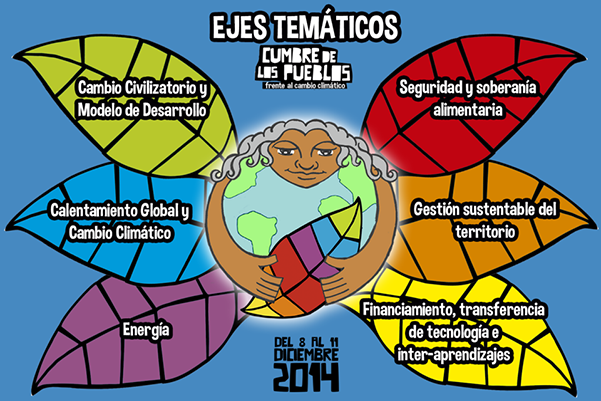 Check out outcomes, updates and more about the Cumbre, Road to Paris and Beyond.

Grassroots Global Justice Alliance (GGJ) is sending a delegation of 12 GGJ leaders to the People’s Summit on Climate Change COP 20 in Lima, Peru from December 8–11, 2014.

World leaders will begin drafting a new agreement on climate change this year in Lima at the UN Framework Convention on Climate Change (UNFCCC) Conference on Parties (COP 20).  The final agreement is then expected to be signed in 2015 at the COP 21 in Paris.  The People’s Summit on Climate Change will coincide with the last few days of the UN process.  It will provide a space for concerned people, organizations and social movements to “…share initiatives, proposals and experiences, as well as define and coordinate our agendas, to bring pressure to bear on the decision makers at COP 20, and demand that the official negotiators take account of the world’s citizens and peoples.” (http://cumbrepuebloscop20.org/about-us/peoples-summit-on-climate-change/)

For this exciting and historic delegation we have an incredible cohort of 12 GGJ leaders who will build with movement allies to oppose false promises, co-create solutions coming from the grassroots and demand that governments be accountable to the People and the Planet.