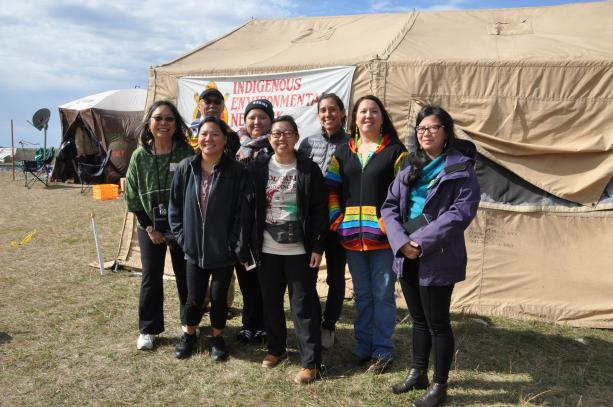 Watch this video of Kandi Mossett, Indigenous Environmental Network, sharing the impact on the local communities of the “Man Camps” — camps of hundreds and sometimes thousands of men from the oil industry living in camps around the area. “The violence against women increased in our communities by 168%. We saw an increase in rape, domestic abuse, drug abuse, violent crimes against women and children. The call out for us is to end the extraction of this oil because it is not only what it is doing to our earth, which is raping and pillaging our earth, that is also causing the rape and pillage of our women and children. These man camps should not be legal.”

Kandi calls on us to contact North Dakota Senator Heidi Heitkamp, and tell her if she really wants to support Native women and children like she claims, she needs to make this connection to the oil industry’s impact on increased violence against Native women and children in her region. She also urges us to reach out to North Dakota Senator John Hoeven and North Dakota Governor Jack Dalrymple and ask them if they are aware of the situation with the man camps surrounding the oil industry.

Tweets from the Women’s Press Conference:

More reflections from the delegation:

“My big takeaway from Standing Rock is how to challenge the theme JOBS VERSUS ENVIRONMENT. As I was leaving Bismarck for home, I was struck by the local pride in oil drilling.  “Drill Baby Drill!” and “North Dakota Oil Country” logos were prominent on cups, T-shirts, hoodies, refrigerator magnets, similar to how San Francisco is associated with the Golden Gate Bridge. The local media bemoaned the fact that DAPL workers and their families were losing income due to the construction delays caused by “protestors.”  For me, it reinforced the importance of promoting our Just Transition agenda that embraces jobs AND the environment, with emphasis on local economies and local solutions. Reliance on oil for energy is unsustainable on so many levels. Reliance on wind power and sun power in North Dakota is. In the few days we spent at Standing Rock Camp, I saw that wind power would be a renewable source for energy and local jobs; the many blown down camp tents were living proof of that fact!  In my day to day work, I will work to better promote a Just Transition agenda that addresses workers. The Extractive Industries have divided us from each other; the construction trade unions are promoting themselves as the voice and consciousness of workers and their families. This Jobs versus Environment themes has to be challenged and we can do it.”

“Pam’s reflection just made me thinking about the 1920’s oil extractions from Indian country, in particular in this section of the country. Which caused all sorts of issues, in reference to checker-boarding of reservations (privatization), increased violence, for some wealth, understanding that some tribes still make money off these resource extractive industries (for some the only money that allows them to provide vital resources). In this way a just transition for Indian country really means a grappling with the loss some tribes would face without extraction (this is where Indian country can differ from other redline communities) all of this I think would be helpful in understanding the complexity of resources, poverty and oil in Indian Country.”