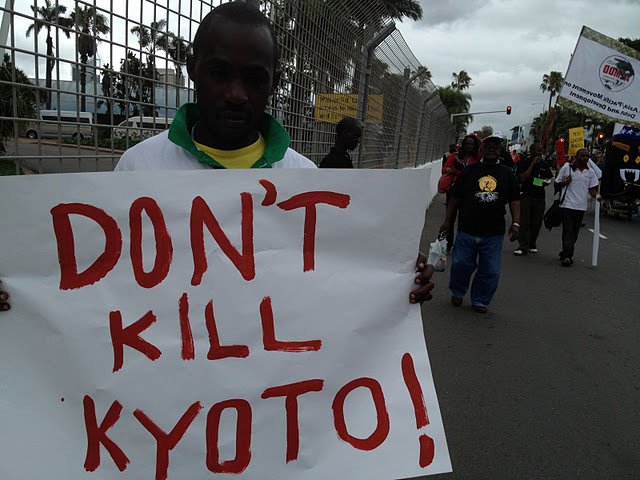 There will be A Climate Change by Michael Leon Guerrero

Being in South Africa for the COP 17 feels like home field advantage for those who fight for justice. I along with some of my colleagues from GGJ attended the 1 Million Climate Jobs Conference (1MCJ), one of the alternative activities to the COP17 (shorthand for the obscenely long title of United Nations Framework Convention on Climate Change Seventeenth Conference of the Parties). On our side of Durban at the University Kwazulu Natal, COP17 is more appropriately known as the “Conference of Polluters”.

During one of the breaks in the 1MCJ Conference, after some tense discussion things fell quiet. Suddenly, from the back of a very packed hall the silence was broken by a baritone voice singing softly, Waaay-maaa, way ma ma ma waaay ma…Soon a few more baritones and tenors joined, later altos and sopranos and several people riffing off of the rhythmic melody “There will be a climate change way-ma…”. Soon we were up dancing and clapping, everyone was engaged in a 3 minute celebration of resistance. It was incredibly moving and powerful. It was clear to me how apartheid had no chance in South Africa. The people don’t just march, they dance. They don’t just shout, they sing. They don’t just build organization, they create symphonies.

My friend Treston Davis Faulkner of Jobs with Justice was later told by one of the South African chant leaders in a march, that the song we heard in the meeting was one commonly sung by people in the apartheid struggle as they did civil disobedience and waited for the onslaught of the police or military forces of the regime. It was a way to build their unity and strength together in the face of terror.

There is a new form of terror that we face today, fiercely and poetically described by Jonathan Neal, Field Secretary of the 1MCJ in the United Kingdom – the burning of Africa, the flooding of Pakistan, the starvation of people in Sudan, wars over disappearing grazing land, more ferocious hurricanes and tornados in the Southeastern United States…

The world is burning while hundreds of Neros fiddle in the Convention Center of Durban. This week the diplomats, the heads of state, the CEOs, the bureaucrats that represent a fraction of the 1% will begin to craft a sales pitch to the world: a new marketing scheme that they will call “The Green Economy”. The details of the plan will be forged over the next 7 months in corporate boardrooms, cubby holes in national capitols and World Bank offices, think tanks and universities on the road to Rio de Janeiro. There they will present a new master plan that they will claim can save the planet from ecological disaster.

There are two fundamental flaws with the new Green Economy scheme. First is that it is not new. It looks very much like the same policies that people around the world have risen up to fight for the past decade. The scheme will say that if we commodify or privatize everything somehow the invisible hand of the market will magically reduce carbon emissions and save the planet – Let’s package it up, put a price tag on it and declare that it is for sale – air, water, pollution, nature. In other words, what the 1% was not able to accomplish through trade agreements in the 1990s and 2000s, they will now accomplish through their version of a Green Economy.

This leads us to the second problem with the scheme. It is not designed to save the planet; it is designed to save capitalism, at least from its current phase, which has only succeeded in exponentially enriching a few and starving many, while leaving the well-being of the Earth hanging in the balance.

Let’s be clear – the market will not save the planet any more than it will save itself.

GGJ has a great delegation here representing communities throughout the United States fighting for environmental and economic justice. We’re connecting with movements that are challenging insidious strategies like Reducing Emissions from Deforestation and Forest Degradation (REDD) which is nothing more than a corporate ploy to steal the land from under indigenous communities and claim that somehow the trees and plants of this newly conquered property “offset”  the company’s poisonous air.

There are others here that are fighting for real and bold solutions that can save the planet – La Via Campesina’s Food Sovereignty campaign and the 1 Million Climate Jobs campaign are examples. GGJ representatives will be writing more blogs this week that will talk about these initiatives and others and we encourage you to follow the debates in Durban this week and the peoples’ resistance to the Green Economy on the road to Rio.

There will be a climate change. It will have less to do with the weather than the hearts and minds of the 99% of people on Earth who must take matters into our own hands to save the planet. Waaay maa…