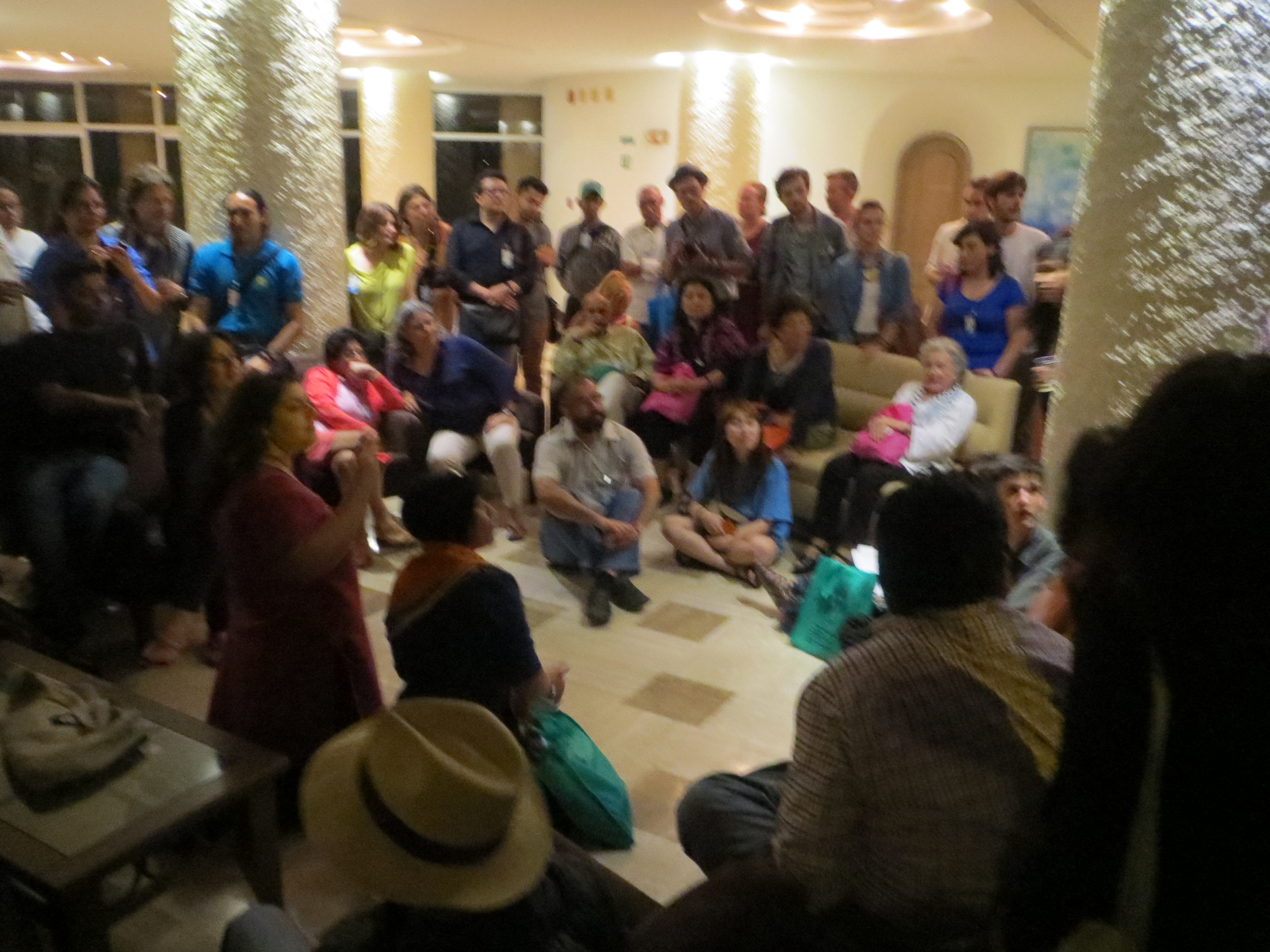 As one of GGJ’s three delegates to the social pre-COP on climate change sponsored by the Bolivarian Republic of Venezuela, i am glad to be part of the process of shaping, with others, the country’s official statement on climate change going into the 2015 negotiations.  Venezuela invited civil society organizations and movements from around the world to engage in this process as a way of inviting the voice of the people into what has become a very closed and corporate-led UN space. Though there are some questions circulating about the underlying intentions of the Venezuelan government and caution by people who know what it is like to be tokenized or have their work/ideas appropriated by larger bodies and institutions (be spoken for by them), one thing is clear; that this is a huge (though not unprecedented) undertaking deserving of note. Why? For one, the document that emerges from this process will be on par with those that other nations produce around the world, discussed and debated by world leaders.  Additionally, if its essence remains after the governmental ministers make their revisions in November (meaning that if it doesn’t get gutted of the essential parts that our organizations and movements bring), then the document will embody the lessons, expectations, hopes and visions of people who are harmed by and who fight against a system that exploits people and the planet.

I join Tom Goldtooth (Indigenous Environmental Network) and Diana Lopez (Southwest Workers Union) on the delegation.  While here, we aim to  deepen relationships with national and international groups that work to address the causes and impacts of climate change; deepen understanding among international allies of the ways that people of color, poor folks and Indigenous communities are negatively impacted by U.S.-led domestic and international policies and practices; and build unity and support toward the Our Power national gathering (Richmond) and the People ‘s Summit (New York).  It is within a broader context, articulated above, that we seek to fulfill these aims.

As i represent GGJ in this space, i too represent the East Michigan Environmental Action Council (EMEAC) as we have some concrete organizational interests in so doing.  For one, we are able to share with and learn from other frontline communities around the world in ways that help to deepen our understanding of the global impacts of local practices, particularly of corporate polluters.  For example, in such spaces, we often meet folks who are at the points of extraction for raw materials that get processed and/or consumed in places such as Detroit.  Additionally, we are working alongside many – some of whom are political allies – to craft a draft document that will ultimately inform the official position that Venezuela takes during global talks on climate change.  So the experiences, stories and lessons we offer from Detroit will be a part of this process.

Finally, we are interested in meeting new global allies in the march toward system change.  In Detroit, where the struggles are intense, the fights are real and the enemies attack from all sides, it will help in the long run to link our struggles with those around the world. So that as we fight in Detroit, we are also fighting the same opponents in San Antonio, in Senegal, in Bolivia, in the Philippines and more; but we are doing it together, with strong voices and solid conviction.

Our work is significant over the coming days in Venezuela and back at home in Detroit.  A lot is required of us, but we’ve been prepared to take up the task and will do so with dignity, honor and respect of ourselves, our communities, those who’ve come before us and those who will follow.