The Grassroots Global Justice delegation hit the ground running this week in Rio de Janeiro.  Corporations and government representatives from around the world have started to arrive, and thousands of civil society groups have made their way to Rio for both the official UN conference and the alternative Cúpula dos Povos (People’s Summit).  The UN summit is taking place in a massive warehouse structure called “Rio Centro” located 2 hours outside of downtown Rio de Janeiro.

At the UN Rio+20 Summit, the levels of participation and access have been even more severely restricted than they have been at other UN summits.  This increase in security is clearly serving to further distance the government and corporate forces from civil society, and the US Government representatives to Rio+20 (including Hillary Clinton) have played their part in making it extremely difficult for voices from the grassroots to reach any part of the negotiation process.  The US government delegation has been essentially unreachable by civil society.  After word leaked out about a meeting with US NGO’s at Windsor Plaza Hotel in the fancy neighborhood of Copacabana at 9:30am on a Sunday morning, the US reps thought twice and moved the meeting inside the official summit where there is much higher security and restrictions on access. 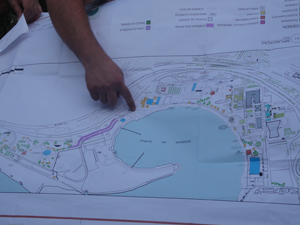 While the United Nations convenes leaders from around the world at the UN Rio+20 Conference, social movements from across Brazil and around the world have converged at the Cúpula Dos Povos (People’s Summit) at the Aterro do Flamengo in Rio de Janeiro.  For many who have participated in the World Social Forum (or regional forums like the US Social Forum), the People’s Summit feels similar in its mainly open space nature.  The Aterro do Flamengo is a 3-mile long seahorse-shaped strip of park land along the entrance to the Guanabara Bay.  The winding path through the People’s Summit is lined with informal vendors, largely from Brazilian indigenous communities, and tents sponsored by social movement organizations, NGOs, and cultural workers, with hundreds of self-organized activities happening simultaneously across the park.

“The World Social Forum began in Brazil 10 years ago, and there is a tradition of an open space model in the movement here.  This People’s Summit is a hybrid.  We called for self-organized activities, and got 1,000 workshops; but we also see the summit as a vehicle to build a common frame for all of our work.  It’s kind of like an Occupy General Assembly, with acknowledged leadership from mass social movements.” – Cindy Wiesner, GGJ National Coordinator 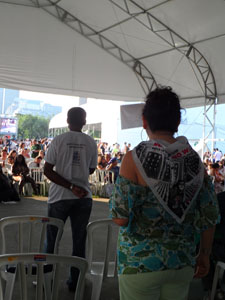 GGJ is playing a key organizing role in the People’s Summit, participating in planning meetings leading up to the summit over the past months and during the process guiding the facilitation, documentation and synthesis of one of the 5 main tracks of the People’s Assembly process.

The People’s Summit is experimenting with a methodology that takes participants through a 5-day process (stopping midway for a mass mobilization tomorrow on June 20, of course!).  The sessions were divided into 5 subject areas called Plenaries, where participants could bring testimonies about their issues: Rights for Social and Environmental Justice, Defense of Common Goods Against Commodification, Food Sovereignty, Energy and Extractive Industries, and Work: For Another Economy and New Paradigms for Society.  Each “Plenary” followed the same track, first talking about root causes and false solutions, then talking about alternatives and real solutions, and finally talking about points of convergence and potential for future collaborations.

The Plenaries ended yesterday, and the “systematization team” spent a long night synthesizing the three sessions into a succinct report to bring to the Assemblies.  Today, the Assemblies launched in an attempt to bring together the work from all 5 tracks. 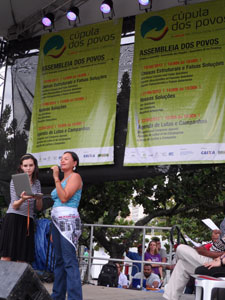 GGJ has been leading Plenary 1 on Rights for Social and Environmental Justice, along with members of the Martin Luther King Center in Cuba and other international social

movement allies.  Check back later this week for a report on what comes out of the Assemblies! 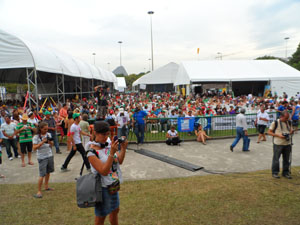 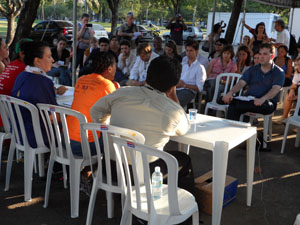 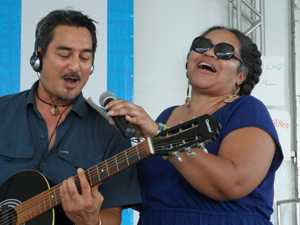 Michael Leon Guerrero, Outgoing GGJ National Coordinator, and Nathanette Mayo of Black Workers For Justice in Raleigh, NC perform during one of the Plenaries at the People’s Summit