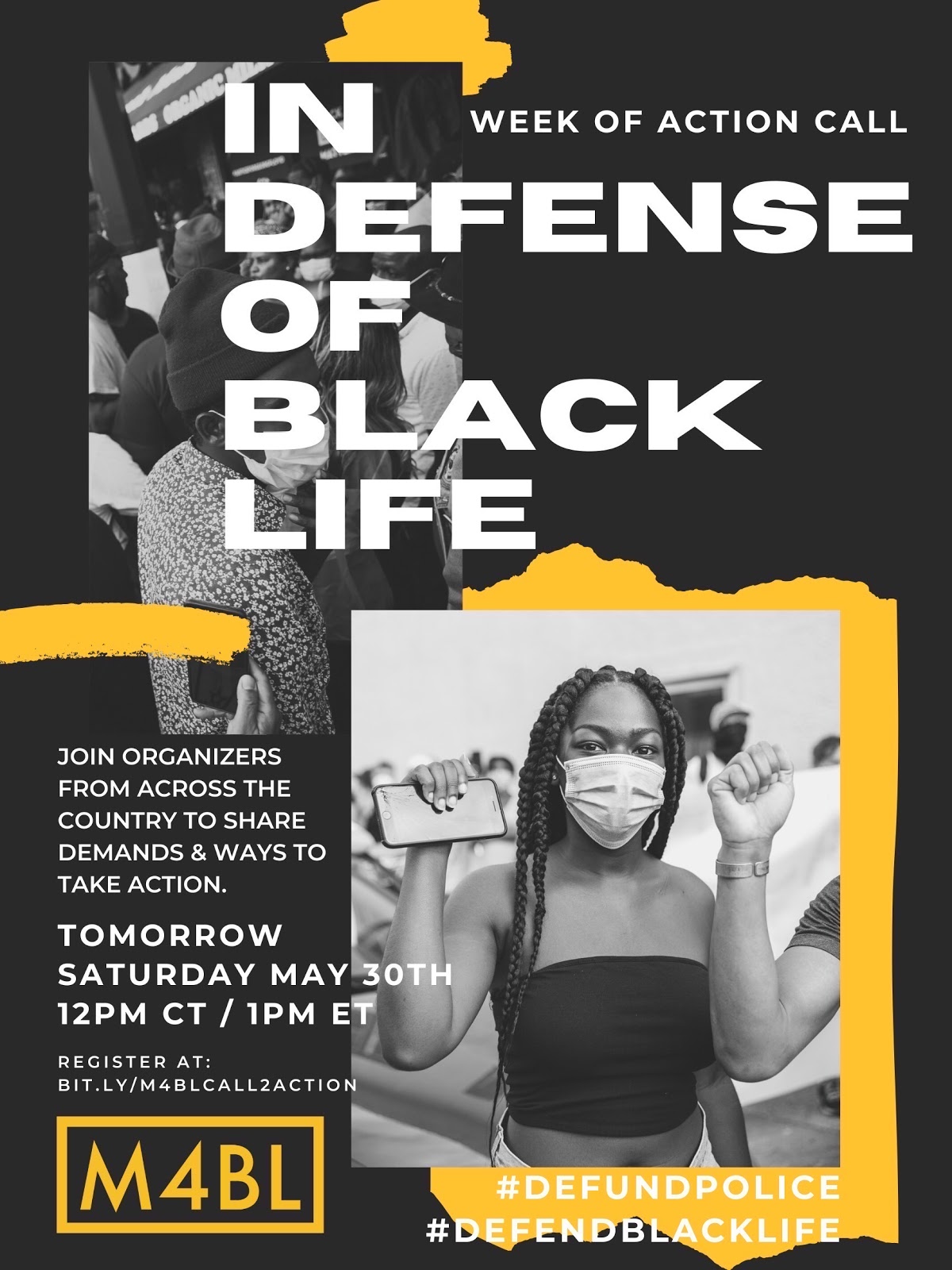 Grassroots Global Justice Alliance joins community voices from across North America and around the world collectively condemning the murders of George Floyd in Minneapolis, Minnesota, Tony McDade in Tallahassee, Florida, Breonna Taylor in Kentucky, Ahmaud Arbery in Georgia and so many more Black lives lost to white racial violence, police militarism, and structural racism in the United States.  We stand with our family in Minneapolis, and the youth on the frontlines who have taken to the streets to demand true justice and system change.

As we bear the wounds of a murdering virus COVID 19, we also bear the lynchings of unarmed innocent Black people by police and vigilantes. The pandemic isn’t just COVID, the  pandemic is white supremacy, police and prisons, capitalism, militarism, colonialism, patriarchy and mass displacement. Now more than ever we should be supporting Black-led organizing to defund the police, abolish prisons, and build communities of collective care not cops and cages. The revolution is draped in righteous anger and resilient dignity! We will not be stopped!

There is a long history of resistance to police violence in Minneapolis and St. Paul. Of course,  the recent police murders of Philando Castile and Jamar Clark are widely known, but the list goes back for decades. Time and again the Black community has fought back while bearing the brunt of police brutality in Minneapolis and St. Paul, Minnesota. These are the Cities that present a  liberal face in the midst of the dirty underbelly of bad education, economic dispossession, criminal injustice, deep health and environmental disparities in Black communities. And now there is George Floyd, another police killing. The fissures are wide open. The rebellion is on.

—Rose Brewer, Activist Scholar with Afro-Eco and leader in GGJ

Call to Action: In Defense of Black Life

On Saturday, May 30th the Movement For Black Lives held a National Call to Action “In Defense of Black Life” to hear from organizers in Minneapolis and across the country.  This call was led by and centered for Black people, but also open to others. Watch the recording below or on Facebook. Learn the Demands! Take Action!

We joined our members across the country in taking to the streets in these critical mass actions last week and weekend, including the powerful action pictures from Friday in front of the Detroit Police Department headquarters and live facial recognition center.  More members are planning actions today on June 1st and throughout the week, including the on-going People’s Strike.

We also lift up the lessons from so many movement forces, including Anti-Police Terror Project who have released the Emergency Communique on George Floyd’s murder —A safety plan for the People with information on how to stay safe and healthy even in these moments when we also need to step into action.

In addition to joining actions, please donate if you are able to support the family of George Floyd and the national bail fund to support Black-led actions across the country.

The Minneapolis Police Department, like other police departments throughout the United States, has a historically notorious and racist track record. It would be wrong to view the murder of George Floyd as one singular event, rather the product (result) of systemic racism.  Local organizers in Minneapolis are calling on the Minneapolis City Council to become visionary leaders by pledging to defund the Minneapolis Police Department and invest in the resources that really keep us safe and healthy, especially in Black communities, Indigenous communities and communities of color.  Sign Reclaim the Block’s petition today: Bit.ly/DefundMPD

GGJ Member About Face: Veterans Against War has also issued an open letter to the Minnesota National Guard to Stand Down for Black Lives and refuse the call to deploy.  “A moral choice lies before you. As veterans who have faced similar tests of conscience, only to realize too late that we chose wrong, we cannot stress enough the impact this decision will have on the rest of your life.”  If you, or someone you know, are considering refusing activation orders to deploy to Minneapolis, contact the GI Rights Hotline: 1-877-447-4487 or visit girightshotline.org. It’s run by civilians and offers free, confidential counseling and information.