2014 was a critical year for the Climate Justice Movement, which is arguably the most important social justice movement of our time. In the minds of many 2014 will be duly noted as the year when the movement transformed from being a resistance movement focused on altering the policies and practices of the national states and trans-national corporations, to one that is beginning to focus on system change and a just transition from the extractive economy.

This transition is in large part the result of grassroots resistance from Indigenous peoples, oppressed peoples, and working class forces throughout the world who have pressed for immediate action to address clear and present dangers and clear the way for a sustainable future. One of the leading forces in North America helping to lead this charge has been the Grassroots Global Justice Alliance (GGJ), which is composed of nearly 60 grassroots organizations from throughout the United States, including the Malcolm X Grassroots Movement (MXGM).

In early December, I had the honor and the privilege of being a delegate on the GGJ delegation to Lima, Peru for the People’s Summit on Climate Change to continue the push for a just transition and system change. The People’s 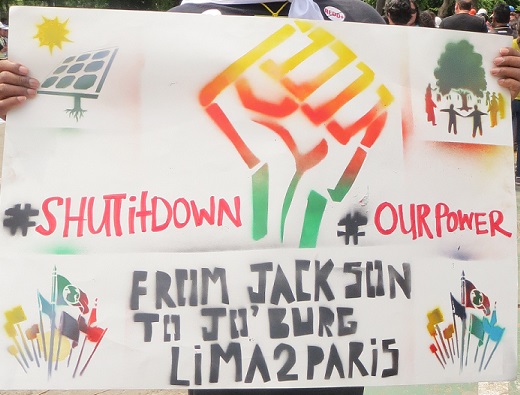 Summits are traditionally the social movements and civil society alternative to the United Nations Framework Convention on Climate Change, more commonly known as the Congress of Parties or COP. This People’s Summit, however focused little on COP 20 (for the 20th year of the UN Framework Negotiation process), and instead focused its attention on building links between social movements, confronting state repression, and promoting alternatives. It also focused on expanding the movement and promoting a just transition from the extractive economy on a global scale to wholeheartedly reject the final climate change framework that is expected at the COP 21 in Paris, France in 2015. To expand the movement and make the rejection as clear as possible, the majority of the civil society
organizations and social movements who participated in the People’s Summit are now building what is being dubbed “the Road to Paris”, which will culminate in a demonstration on the last day of the COP 21 negotiations. This demonstration is projected to top the one in New York City in September 2014 and be the largest in history against Climate Change.

The world will desperately need it, because the framework that is set to be agreed upon in Paris next December is nothing short of a crime against mother earth and humanity. What the final framework sets in place is in effect the recolonization of much of Africa, Asia, and Latin America in the name of “preservation”. Under the final framework the wealthier nations of North America, Europe, and East Asia along with transnational corporations are being allowed to “buy” the remaining forests and wetlands of the world to allegedly “protect” them from deforestation and encroachment. What it really amounts to is allowing these nations and corporations to continue polluting the earth at the same rate they currently are, and holding these forests as “offsets”. This practice is already threatening millions of Indigenous people throughout the planet, and is ensuring that the remaining “commons” are owned and controlled by the imperialist powers and the transnationals as conditions continue to worsen as they refuse to stop

march on the path to extinction. One of the most callous parts of the final framework is that the United States had human rights utterly removed from the negotiated text! Keep in in mind, that this is a United Nations document, which allegedly created to protect the human rights of everyone on the planet. This demonstrated how far capital is willing to go to put profits over people and the planet itself.

If anything, COP 20 demonstrated how desperately we need system change, and how critical a just transition is to get us there. From the perspective of Cooperation Jackson, a just transition is about creating an “economy for
the people and the planet” through economic democracy, which must be rooted in cooperative economics and social solidarity, and the utilization ofproductive processes that are not dependent on the extractive economy. Through the work of Cooperation Jackson, my contributions towards a just transition in 2015 will support the “Road to Paris” in the following ways: