I am not accustomed to needing language interpretation or translation in my community, and it brought up a mixed bag of deep things for me to rely on this so heavily in Tunis.  There was something, though, about everyone’s vision for participating in the 2015 World Social Forum (WSF) that spoke beyond words, verbal cadence or body language –we were all there because we believe another world is possible and we consider ourselves to be players in the transition towards otro mundo | another world.  wherever we’re from and whatever language/s we speak, we also consider ourselves participants with a responsibility to people and the planet.

Our goal as GGJ (Grassroots Global Justice Alliance) delegates was to deepen our understanding of how we can better work in solidarity with the tireless efforts of so many resisters, defenders, and community leaders across the world and how we can continue to build connections from our local struggles to efforts of gente | people throughout the world.

GGJ’s participation in the World March of Women (WMW) came out of the last World Social Forum held in Tunisia, in 2013.  This year, our collective relationship with the WMW Coordinating Committee became more specifically strengthened as members of our GGJ U.S. delegation met these fierce mujeres from Brazil, Mozambique, Turkey, South Africa, and more.  We collaborated on the presentation of 2 sessions, “The 4th International Call to Action” and “Feminists Unite”.   Both workshops were offered to packed rooms, thirsting for and anticipating great things.  Mujeres delivered on both occasions…

The 4th International Call to Action session started off with some hitches that were overcome, in my opinion,

merely because there was a collective will in the room to do so.  There were problems with providing interpretation, and yet, there was something at the center of this session that did not need much further explanation…. Marche Mondiale des Femmes | Marcha Mundial de las Mujeres | World March of Women.  The panel seated at the center of the room included women, speaking different languages and communicating a single message-–the time is now for a global movement to unplug from patriarchy and disconnect from capitalism through a feminist movement for all.

A majority of mujeres, and transgender gente, and men allies filled every chair and all corners of the room.  It was loud in there with the clamoring of women on the rise, of mujeres on the move!  the crowd heard from over 5 regions represented so far in the upcoming World March of Women –Europe, the Americas, Asia, Africa, Middle East. we heard the ways in which each region will participate in the April 24th march and on each of our commitments to continue to build throughout the March 8th – October 17th period of international movement assemblies.  the various proclamations and declarations of solidarity were met with fervor and a thrilling sense of pride and promise.  several times our voices rose into chants with drumbeats of solidarity as we envisioned justice in our communities.

GGJ leads the U.S. participation in the 2015 World March of Women, the 67th chapter to join this epic action.  We are grounded in the slogan, We Will March Until We Are All Free (Seguiremos en marcha hasta que todas seamos libres): Defending the Dignity of Our Bodies, Our Communities, and Mother Earth.  From the belly of the beast, GGJ delegates presented our slogan as a chant in French, Spanish, and English.  You could feel an almost tactile enthusiasm for what is to come from a movement grounded in the solidarity of women throughout the world. 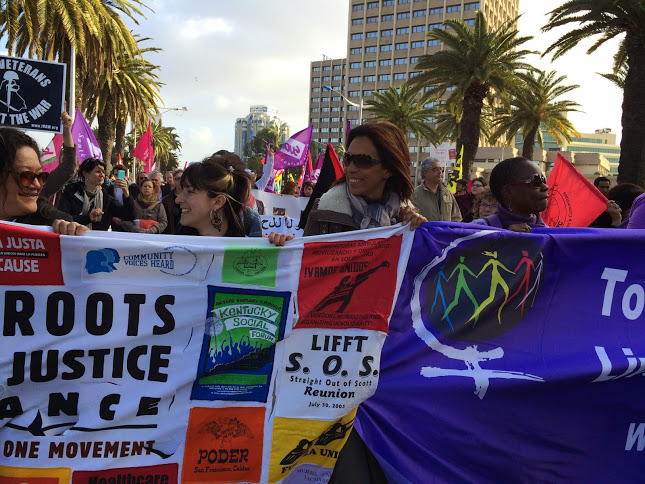 The session closed with a resounding, “so-so-so…solidarity…avec les femmes…du monde entier!” (solidarity with women worldwide).  I think this chant became the unofficial slogan of the GGJ Delegation at the 2015 World Social Forum.

Our next collaboration between GGJ delegates and World March of Women Coordinating Committee members called for working together to build the workshop, “Feminists Unite”.  This session featured accounts of fierce women-led work building change in various parts of the world.  Our central goals included to make time for presenting workshop participants with the fire of mujeres in global resistance, while making enough time and adequate space for collective analysis, communal processing, and personal relationship building.  As I walked throughout the space and shared reflections later, I believe we met our goals and vision for this session.

We heard from women on the front lines of brutality in various forms.

Participants broke into small groups and intensely discussed their perspectives on the 4 areas that the World March of Women elevates:

Women and workers from the U.S. found deep commonalities with women from Arab countries.  A Palestinian organizer exchanged views with a U.S. veteran of the Iraq war.  A discussion on climate justice met racial and gender-based tensions and clarities.  Mujeres whose communities lay separated by vast bodies of water and land, explored deep connections between their experiences of violence.

We closed this session reporting back on each group’s discussions, sharing complicated analysis based in common understandings.  The room reiterated our vision for and commitment to building a better world together.  At various moments, both of these workshops, alongside the intensities of sharing our stories, provoked ruckus laughter, applause, high fives and hugs among participants, attendees, and even passersby.  From the center of this encanto, of this joy, we were all affirmed of the fact that there is no end to the immense value of interactions between women.

In less than a month, on April 24, 2015, the World March of Women will commemorate the 2nd anniversary of the factory fires that devastated communities of Bangladesh, and cemented a global collective plea for an end to capitalism, colonialism and patriarchy. 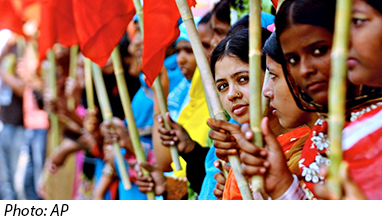 At 12pm, on April 24th, actions of defense, fierce resistance and celebration will ripple across the globe, touching communities that recognize the impact of solidarity.  In the United States, many communities will participate differently; collectively we will submit petitions demanding The Children’s Place to pay just compensation to the families of the victims of the Rana Plaza factory collapse, and to comply with safety regulations in the workplaces of their employees throughout the world.  From the belly of the beast, grassroots communities throughout the U.S. join our sisters and allies in coming together to end capitalism and colonialism, and to dismantle patriarchy, as we march, work, hustle, build, dance, revel and rebel until we are all free!