Recently I was selected to be part of a delegation attending a preparation meeting for the Social PreCOP scheduled for November in Venezuela. I was part of the Grassroots Global Justice delegation along with Ife Kilimanjaro from East Michigan Environmental Action Council and Tom Goldtooth from Indigenous Environmental Network. 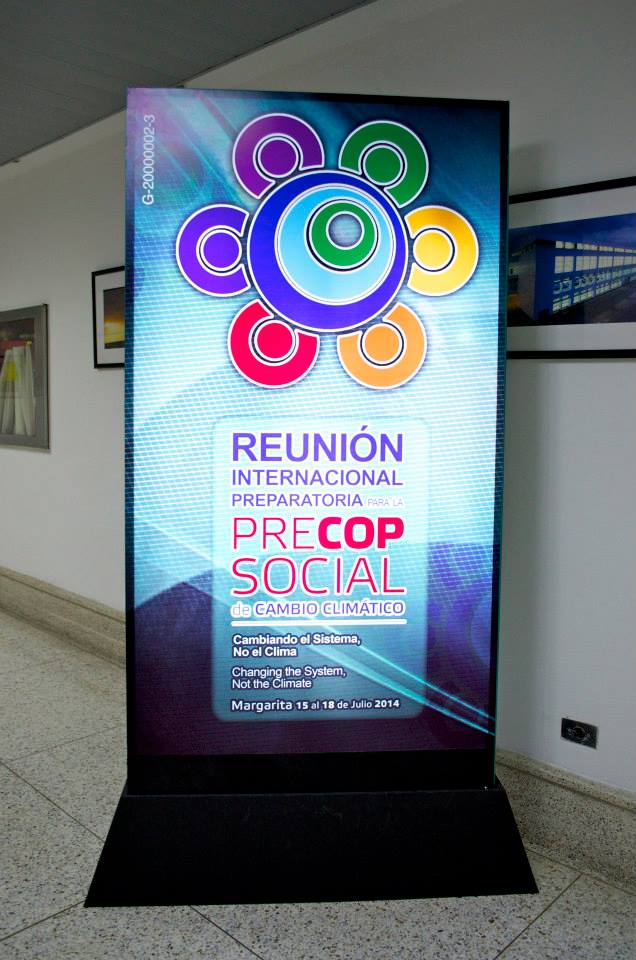 Southwest Workers Union’s work within North America, the belly of the beast, is grounded in our struggle for justice for people who by systematic design have more obstacles to overcome. Our members come from all over Latino America but most are native to the US/Mexico border region, which became a border through the Treaty of Guadalupe Hidalgo in 1848. Our ancestors where betrayed, lynched, hunted and slaughtered because they were brown, because they didn’t believe in the racist, oppressive laws that were imposed to keep the white, male landowners in power. The same story can be said throughout the Caribbean and the Americas. And while we hold similar histories we also hold similar solutions and ways of organizing around climate change.

This convergence focused around 5 strategic themes that will collectively construct a new climate agreement. Youth, elders, negotiators, organizers and everyone in between were part of these meetings.

I participated in the mesa around Social Participation in decision making spaces. We spent half a day discussing what were issues around participation that we faced. The main points were:

– Corporations are over represented within decision making spaces

These were only a few of the many issues the people have. Some of the reasons that communities do not participate comes down to location and time of meeting, no translation into other languages and prioritization of the “professional” over the impacted.*

In general it was disheartening to be part of a meeting that was talking about inclusion while the mega organizations present continued to try to control the space. Yet the mesa I was part of was highly attended by social movements that were able to add language to the final document that included youth, indigenous and spaces for social movements and people on the ground to be part of decision-making meetings.

As a Chicana from the Southwest it was an honor to help translate during meetings and among conversations.

The final document of the climate agreement is called the Margarita Declaration on Climate Change, and can be found here: http://www.precopsocial.org/sites/default/files/archivos/margarita_declaration_on_climate_change.pdf

One of my favorite days was the day we visited a plazita to get some souvenirs. I think the reality was that most of us needed to see a part of the city that reflected our own community. As we passed through the little streets, saw the graffiti and waved to the neighbors on the street and it felt good.

In the Mercado I met a women, Elena, this women is so inspiring. She sold jewelry, pearls and stones from South America. We spend almost 1 hour talking about her work. While we talked she was also making jewelry and told me about the different uses and where the stones came from. She was 1 of about 20 stands up that day selling souvenirs, flowers and everything in between.

Elena is proud of her jewelry and the store keepers were more than ready to tell the story of la Virgin del Valle and the history of the Island. This is what resilience looks like. Mercados that pull local history and resources, and that are based in culture and art. It wasn’t about trying to get rich or the latest phone but it was simply about surviving.

Across the board was the same story, from the Social PreCOP to the Mercado and back at home people are creating solutions to keep surviving, to heal the earth. They are have doing that without money, growing their own food, using natural healing and resisting against false solutions.