As the GGJ delegation returns back from Brazil this week, most reports on the unveiling of the “Green Economy” at Rio+20 are calling the UN conference at best a stalemate, if not a complete failure.  After his first day of attending the UN conference, Kali Akuno of Malcolm X Grassroots Movement reported back to the GGJ delegation an analysis of what we could expect: “Inside the UN summit, the US is playing the bad cop and the UN is playing the good cop, but they share the same goal of putting capital in the driver seat of the process.  The US is really leading the charge.”  Kali shared that from a grassroots perspective, the best we could hope for coming out of Rio+20 was that there be no changes to the 1992 agreements.

This ended up being the outcome—the proposed changes to the 1992 commitments were so contentious that in the end it seemed best to settle for what was affirmed 20 years ago.  “As a result, the draft document, which seems set to become the final document, takes us precisely nowhere: 190 governments have spent 20 years bracing themselves to “acknowledge”, “recognise” and express “deep concern” about the world’s environmental crises, but not to do anything about them,” reports George Manbiot of the UK news source The Guardian.

While most of the policies defined in 1992 will continue to have a devastating impact on people and the planet, there were a few principles which set important precedents that the US and the UN were trying to do away with all together.  One in particular that the US was attempting to get removed is Principle 7, which refers to “Common But Differentiated Responsibilities.”  This principle affirms that those industrialized countries in the global north that contribute more to the climate crisis have a greater responsibility in addressing the impacts of the crisis.  Keeping this clause is a victory in principle, but we have yet to see what concrete actions global elites will actually take to follow through on it. 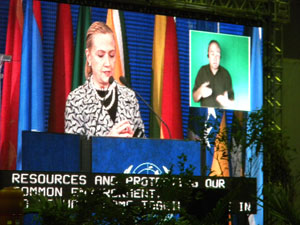 The US government was strikingly absent at Rio+20 last week.  Hillary Clinton flew in to Rio for just a few hours on the last day of the conference to hold an exclusive high-level press conference announcing a financing mechanism for private investments in clean energy in Africa, and the US delegation failed to show up at many side events they had scheduled.  They clearly chose to prioritize attendance at the G20 meeting in Mexico, which is no big surprise given how much easier it is for them to move their neoliberal agenda through that process.  The G20 is a group of finance ministers and central bank governors from 20 major economies who have annual closed-door meetings where they come together to influence the global economy and financial system.  “The presence in Mexico of the presidents of the major economies, many of whom will not be in Rio, reinforces the news that the major decisions to be made at Rio+20 were already defined and packaged for the G20 meetings,” reports the Global Justice Ecology Project.

Knowing that the main goal of the US at Rio+20 was to impose more of the same failing economic policies painted in a new color, Grassroots Global Justice collected over 1,130 signatures on a petition to US government representatives at Rio+20 calling for a rejection of the false solutions of the “Green” capitalism and for a commitment to reduce emissions and invest in Zero Waste systems. Click here to read the full petition.

The plan was to deliver the petition to the US Delegation at Rio+20 during two events they were hosting—first at a public briefing with US NGO’s at a hotel in Copacabana on Sunday June 17, and second at a side event on Friday June 22, the final day at the UN Summit, entitled “US Priorities at Rio+20.” GGJ delegates attended both events ready to present them with our petition outlining what we see as the US Priorities at Rio+20.

On June 17 we brought our demands written on large pieces of paper to the public briefing, and on June 22, we showed up ready to stack the deck during the Question & Answer period to ask how the US plans to address the issues our petition presents, arriving early to distribute copies of the petition cover letter and our “We Reject the GreenD Economy” sticker on the presenters’ podium and to members of the audience.

However, the US bailed on both of these events. “Given their disappointment with the overall document and that they weren’t able to assert their agenda and get the green economy inserted to the extent that they were hoping for, [the US] low-balled the entire process,” explained Kali just after the US failed to show up on June 22.  “As Hillary Clinton just announced in her press conference, knowing that they weren’t going to get what they wanted, they’re trying to engage in a bunch of side initiatives, and they picked one of the weakest areas in the world to concentrate on, which is the African continent.  The US is going to put a pittance in money into the UN program and then have the rest of it come from private corporations and investment to do green development and build a green economy in Africa…  Their response to the global south demanding parity, technology transfer, and reparations, is to let the corporations run, own and control everything, and they’re going to promote that through these little side initiatives. Hillary clearly thought that was more of a priority than to come here and talk to civil society.” 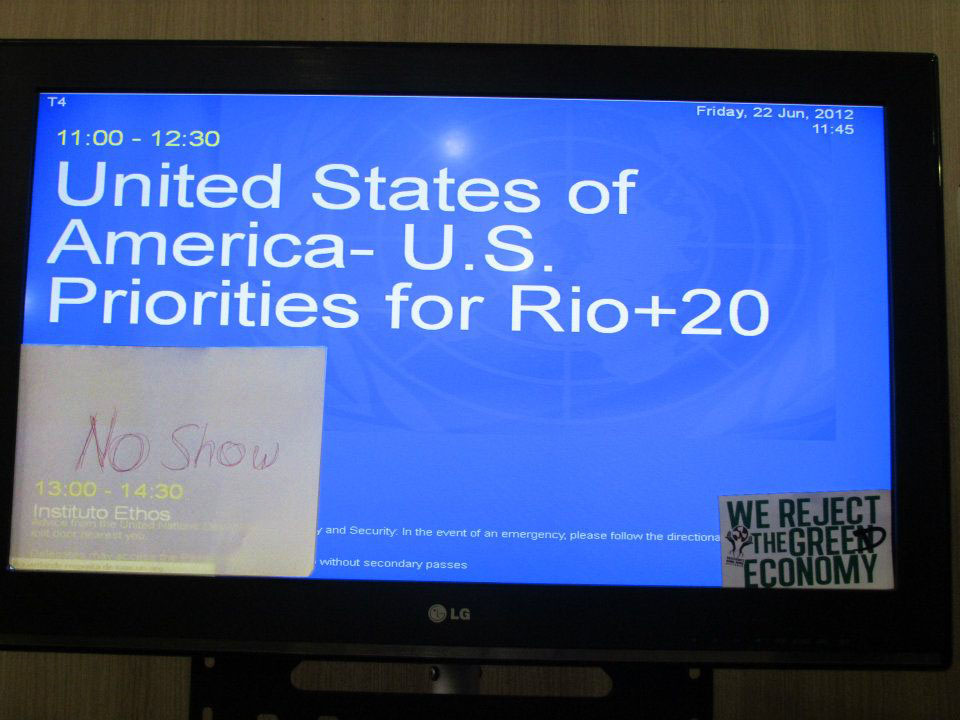 Despite the No-Show pattern of the US Delegation at Rio+20, GGJ members and allies were still able to get the petition into their hands twice: Indigenous Environmental Network maneuvered a tricky situation to get it into the hands of Hillary Clinton’s entourage during her press conference, and our friends at Food and Water Watch tracked down the US delegation at a side event inside the UN conference.

While we can claim victory in the sense that this Green Capitalist model that the UN summit hoped to launch seems to have lost steam before taking off, we still have a long way to go toward actually implementing strategies for a real Green Economy that keeps the green in the grassroots and implements solutions to the economic and ecological crises that cool the planet and put our communities to work.

The GGJ petition echoed the voices of civil society at Rio+20 calling for a rejection of the corporate/capitalist model of the Green Economy.  This is just one step in a process we are engaged in to push for ambitious changes in the way the US handles climate change.  One of our demands is for the US to reduce emissions by 90% by 2050.  That will require a multi-prong strategy that addresses root causes and implements alternative initiatives that put cleaner energy sources into place and invest in local economies by putting people to work.  Reducing US emissions by 90% means a system change.