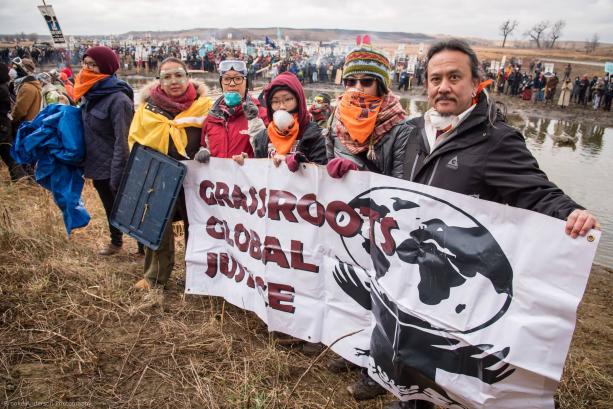 From November 22-26, 2016 a multiracial national delegation of over 100 representatives from 20 movement organizations for social, economic, climate and environmental justice went to Standing Rock in a show of solidarity for indigenous survival and sovereignty as leaders on the ground continue to protect the water and halt the construction of the Dakota Access Pipeline. This delegation, organized under the banner of “Honoring 524 Years of Resistance to Colonialism in Defense of Mother Earth,” was a collaboration between the Climate Justice Alliance (CJA) and Grassroots Global Justice Alliance (GGJ), and was led by people who are on the frontline of extractive industries, environmental racism and police brutality in their own communities.  From places as far away as Miami, Detroit, Seattle, and Chicago, this delegation was comprised of People of Color, LGBTQ people, women, and immigrants who see the connection between their own struggles and the long history of indigenous sovereignty, alongside anti-racist white folks and veterans speaking out against militarization.

On November 24th, Water Protectors at Standing Rock peacefully and prayerfully reclaimed Turtle Island to protect the graves of their ancestors there and to call for an end to the construction of the Dakota Access Pipeline.  Our delegation supported the action by showing up to help hold space for water protectors who went to reclaim and hold ceremony at a sacred site occupied and desecrated by police forces at Standing Rock.

On November 25th, our delegates participated in an action at the Kirckwood Mall in Bismarck to bring attention to the NODAPL struggle on the major shopping day Black Friday. “Multiple water protectors and their allies who stand in support of the efforts to halt the construction of the Dakota Access Pipeline were arrested today at the Kirkwood Mall in Bismarck.  These water protectors had gathered to hold a prayer circle, raise awareness with shoppers and disseminate information on the human and environmental impacts of the pipeline.  Heavily weaponized and undercover police, physically assaulted and arrested close to 50 protectors within minutes of gathering peacefully.”  Read the full press release here.

Also on November 25th, the US Army Corps of Engineers gave the Oceti Sakowin camp an eviction notice, declaring “the portion of the Corps-managed federal property north of the Cannonball River to all public use and access effective December 5, 2016” and encouraging everyone to move to a “free speech zone” in a different location.  A coalition of Sacred Stone Camp, International Indigenous Youth Council, Indigenous Environmental Network and Honor the Earth immediately responded with this statement, declaring “The Army Corps has no authority to evict us from these lands.  The Oceti Sakowin encampment is located on the ancestral homeland of the Lakota, Mandan, Arikara, and Northern Cheyenne – on territory never ceded to the U.S. government, and affirmed in the 1851 Treaty of Ft. Laramie as sovereign land belonging to the Great Sioux Nation.  The encampment is, in many respects, a reclamation of this stolen territory and the right to self-determination guaranteed in the treaties.”

The Sacred Stone Camp is calling for actions every day in December, starting December 1st. “This December, every single day is a #NoDAPL day of action. We are calling for a month of solidarity beginning with a Global Day of Action on December 1st. We are asking people to target the banks funding Dakota Access Pipeline and the Sheriff Departments that have been brutalizing peaceful water protectors. Find a target near you and register your action.

On Sunday November 27, the US Army Corps of Engineers issued this clarifying statement that they would not forcibly remove anyone from the camp.  Follow Indigenous Rising Media for the latest updates.

We collected testimony from a number of our members who came on this delegation. See below to watch videos, we’ll continue adding them as they are ready.

CJA/GGJ delegation member Ananda Lee Tan on the why the movement at Standing Rock is critical for all our future generations and why he is there this week to “Honor 524 Years of Resistance to Colonialism in Defense of Mother Earth.”