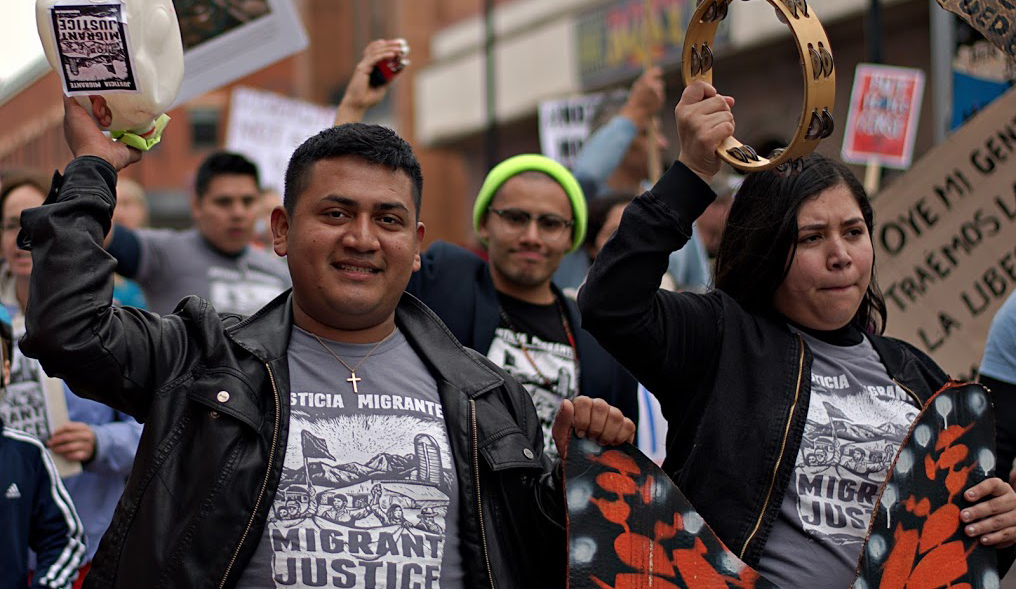 Longtime GGJ member, Migrant Justice, has been running their powerful Milk with Dignity Campaign since 2014 after Vermont dairy workers conducted an in-depth survey to document the top workplace and housing issues in the industry. Workers then converted these worker’s rights and housing violations into solutions in the creation of the Milk with Dignity Code of Conduct—defining the human rights essential to a dignified workplace and fair housing.

The Milk with Dignity Program brings together farmworkers, consumers, farmers and corporate buyers in support of dignified wages and humane labor and housing conditions in the dairy industry in the Northeastern United States. The principal goal of the Milk with Dignity (MD) Program is to foster a sustainable Northeast dairy industry that advances the human rights of farmworkers, the longterm interests of farmers, and the ethical supply chain concerns of retail food companies and consumers.

The Milk with Dignity campaign organizes and builds a movement of farmworkers and allies to call on major food corporations to stop and proactively prevent farmworker rights abuses in their dairy supply chains by joining the worker-designed and worker-driven Milk with Dignity Program.

From March 8th through March 22nd, Migrant Justice will embark on a 14-day speaking tour, taking us to 7 states for a total of 24 presentations. The Dignity Tour will bring us to audiences around the region to share the success story of the Milk with Dignity program and the “new day for human rights in dairy.”

The Dignity Tour will also build support for the campaign calling on supermarket giant Hannaford to join the Milk with Dignity program and take responsibility for the rights and well-being of the farmworkers behind Hannaford-brand milk. We will travel to every state where Hannaford has stores, including in the company’s backyard of Maine.

Throughout the two weeks of the Dignity Tour, Migrant Justice will connect with audiences in high schools and colleges, at churches and synagogues, in libraries, community centers, health clinics, and general stores. At each stop, the public will hear from farmworkers and organizers about the incredible human rights transformation underway and will be able to make their voices heard, telling Hannaford that it’s time to get with the program!

GGJ joined many others in supporting the Milk with Dignity Campaign by sending a letter of support to Mike Vail, the CEO of Hannaford Supermarkets to support the campaign and answer to the worker-led demands that work to address the systemic issues of abuse and exploitation practices of the dairy industry.

“ We strongly support Migrant Justice’s Milk with Dignity campaign as part of the core solution to the systemic problems of the dairy industry. We urge corporations like yours to take responsibility for the abuses that are happening within the industry and actively promote solutions led by workers on the frontlines of production such as:

● Worker-led certification that ensures dairy products are sourced free from human rights abuses; benefits farmers by providing a premium during a time of economic challenge, and benefits workers by improving conditions and securing respect and dignity on the farm. ”