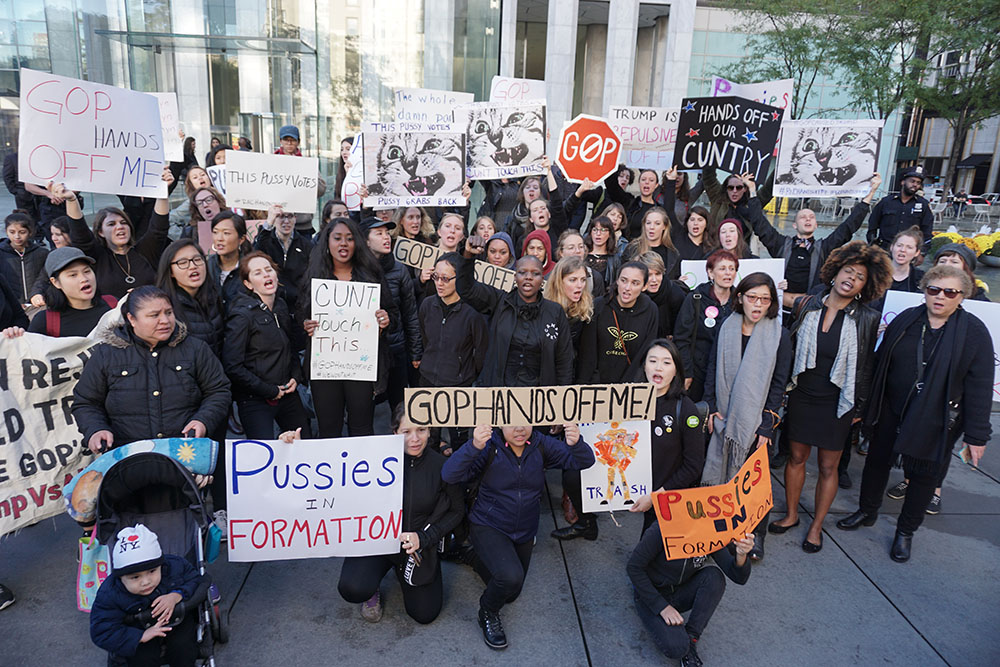 Starting October 12, following the release of Donald Trump’s 2005 interview with Billy Bush of “Access Hollywood” where he brags about grabbing women “by the pussy” without consent, women of color and their allies across the country started a wave of inspiring feminist actions under the slogan “GOP Hands Off Me.”

Donald Trump’s commentary about women and his minimization of the trauma of sexual violence and assault has an impact on all survivors, women, and transgender people.  “Rape culture is bipartisan, but at this moment this is about being able to talk about the danger of Trump and the long-term implications of what the movement behind him means,” GGJ National Coordinator Cindy Wiesner told In These Times.  At the same time, “we’re very clear that we need to build an independent, autonomous and strong progressive left if Hillary Clinton is elected, to hold her accountable. The reality is that this momentum is also a message for the Democrats and for Hillary Clinton. Our feminism is very different from her feminism… We’ve got to draw the line with Trump, but we have to really give the message to the Democrats if they get elected that we need something dramatically different. Who is president of the United States matters not only to us, but to people around the world. We don’t want Hillary Clinton to be the 21st century, American Margaret Thatcher if she wins.”

Beyond the elections, it is crucial for us as a movement to support the critical struggle for all women and gender oppressed people defending the dignity of our bodies and our communities, especially in the coming period.

We also have our work cut out for us in making climate change an issue that the next president takes seriously.  Neither candidate addressed the real threat of the increasing impacts of climate change on vulnerable communities, in particular women who are often the first and worst hit when it comes to climate disasters.

“But women are not just vulnerable victims; women hold the solutions to climate justice. Whether in the global North or the global South, women are already leading from the front lines, as community leaders, as providers of water, food, and energy and as caretakers of the land and home. Producing half of all the food we eat, women hold the knowledge and roles of localized, community-based economies to counter the current exploitative and extractive economy which has led us down this destructive path that prioritizes profit over people and the planet.”

We know that collective action is best way for us to change the conditions that women are facing in our communities, our workplaces, our homes, and in defense of our land and water.  Across organizations and movements, we are seeing a new surge of grassroots feminism that can build the kind of collective power our movement needs.  Stay tuned for more feminist action in the coming period!

Check out some of the top tweets during the debate:

Not even 20 minutes in, and the racism, misogyny, and xenophobia is already making my sick. #debate #GOPHandsOffMe— Emma Sandoval (@Nemmajean) October 20, 2016

Women’s self-determination over their bodies at stake in this election. #GOPHandsOffMe Time to stand up against #misogyny and #sexism— Jaron Browne (@JaronBrowne) October 20, 2016

It was 80 degrees in NYC today and we need to decarbonize the economy by 2026, but Fitness To Be President seems like a great #debate topic— Kate Aronoff (@KateAronoff) October 20, 2016

US interventions abroad is a main cause of migration to the US. #commonsense #debate— Helena Wong (@helenaswong) October 20, 2016

Read about how #GOPHandsoffme is also a msg for Clinton & Dems: “Our feminism is very different than her feminism.” https://t.co/bULmYHiCh1— Mariah Montgomery (@MariahMyriah) October 20, 2016