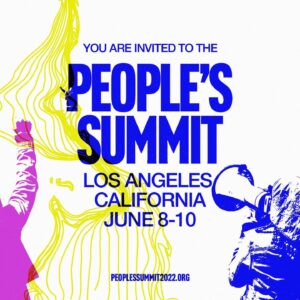 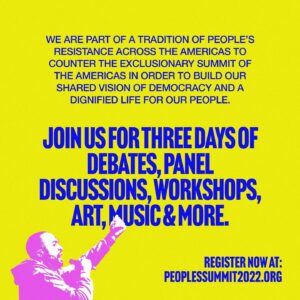 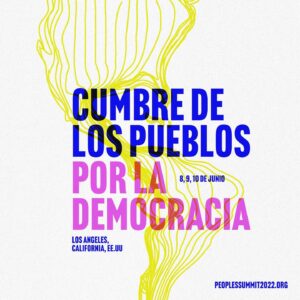 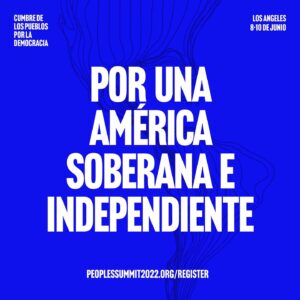 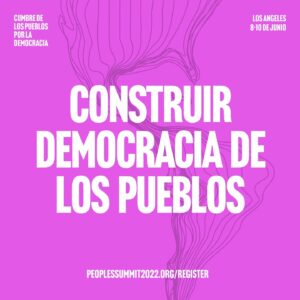 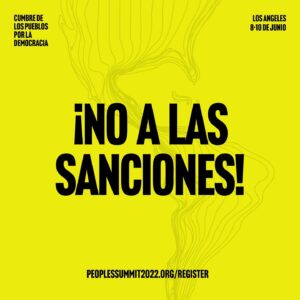 We are here at the People’s Summit for Democracy in Los Angeles, bringing a delegation of over 30 GGJ members and organizers to build solidarity with movement allies and comrades from across the Americas.

Together, we are raising our collective voices to counter neoliberal forces gathering at the Summit of the Americas (SA), held every few years—this time in Los Angeles—and attended by banks, development agencies, and heads of states from the Western Hemisphere.

The Summit of the Americas is themed “Building a Sustainable, Resilient, and Equitable Future.” This only furthers the contradictions and greenwashing of the neoloberal project in this critical historical moment of polarized wealth and poverty that we have seen across the Americas throughout the pandemic and the rise of neofacist forces in many of our states.

Historically, the Organization of American States (OAS), the SA convener, has been designed to uphold U.S. hegemony and corporate interests across the Americas, often mobilized against progressive, left, and socialist governments when they have come to power in the region.

This year, with the United States as the host country, the question of U.S. hegemony and the exclusion of socialist state leaders has come to a head. Despite the summit being a vehicle for the countries of Latin America, North America, and the Caribbean to discuss common issues and policies, the U.S. has barred Cuba, Nicaragua, and Venezuela from attending. This exclusion has culminated in a multicountry and leader boycott, including Guatemala, Bolivia, and Mexican President Andrés Manuel López Obrador.

We are mobilizing to support the People’s Summit, a counter event created by movement forces as a space for frontline communities and popular movements to collaborate on pressing issues in Turtle Island and throughout the hemisphere.

With our banner message—No War, No Warming: Building a Feminist Economy, our GGJ delegation is bringing perspectives of North American grassroots organizing movements with our global allies in shared struggle around land and water defense, demilitarization and divestment from systems of harm, forced migration in the Americas, climate justice, Indigenous & national sovereignty, upholding bodily autonomy, and feminist economies.

Are you attending the People’s Summit? Join us at our Thursday panel and Friday workshop!

Gender Violence and the Struggle for Liberation

Violence against women and the LGBTQ+ community pervades our societies at all levels, from the home to the state. Join activists and organizers to share perspectives on the struggle against patriarchy and gender-based violence in all of its forms in today’s world.

No War, No Warming—Building a Feminist Economy | Workshop

No War, No Warming—Building a Feminist Economy | Workshop

The U.S. military is the single largest consumer of fossil fuels in the world, enforces occupation of Indigenous sovereign lands, and upholds violent resource extraction across the world.  Addressing climate change requires ending this U.S. military-industrial complex and all its consequences on our communities. and presence. We will hear testimonies from communities in resistance,  and ultimately call on world leaders to take action to stop funding unending wars, uphold self-determination and sovereignty, and invest in regeneration and a feminist economy.

Urge your elected officials to call for No War, No Warming!

We hope to see many of you in Los Angeles! Even if you can’t join us in the streets, follow us online and join in the movement building with us.

As our comrades at La Via Campesina remind us, Globalize the Struggle, Globalize Hope!