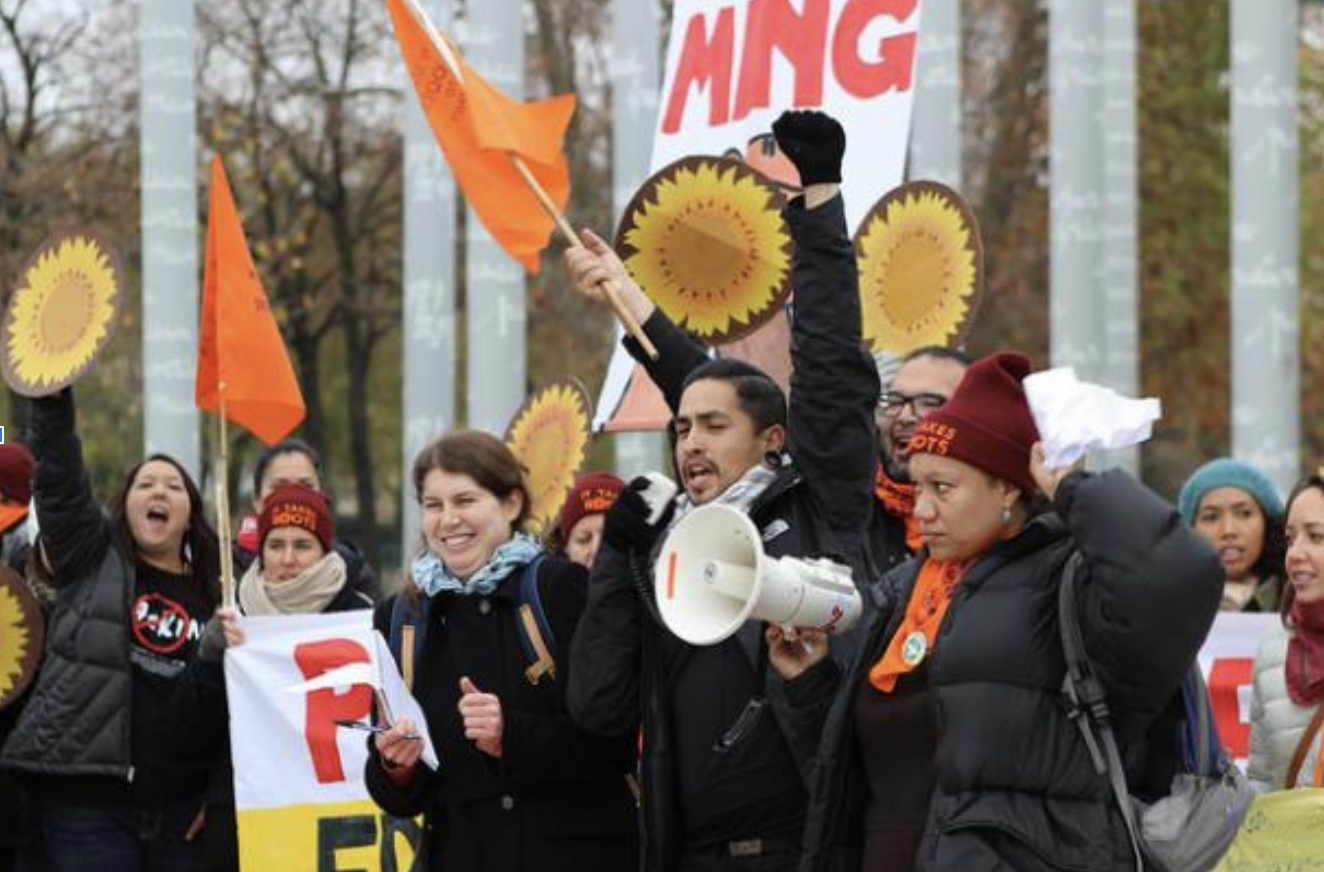 The annual COP is a crucial battle ground for us. It is a site where heads of state and world leaders assemble to negotiate the content and implementation of climate agreements, treaties that determine the paradigm of possibility for taking action at a grand scale on the climate crisis. From failing to sign the Kyoto Accord (1992) to undermining efforts for binding agreements at COP15 in Copenhagen (2009), the US has been advancing a minimal level of action to mitigate the climate crisis. At the same time, it has consistently protected the interests of transnational corporate polluters. Everyday people are not represented even though our lives are at stake. Global social movements have consistently organized outside the COP meetings to create spaces for convergence and alignment on global climate solutions that address systems change, not climate change. GGJ delegations engage both inside and outside the UN negotiations.

GGJ and It Takes Roots, a US-based alliance of over 200 frontline community organizations, ensure the presence of grassroots communities to demand grand scale agreements that are bold and enforceable. Together with rising social movement formations from across the globe, we push the paradigm of possibility away from false solutions such as carbon market, carbon trading, and offset mechanisms and toward a Just Transition.

As greenhouse gas emissions continue to accumulate in the atmosphere and cause climate catastrophes across the globe, GGJ and organized frontline communities in the climate movement have been building global networks to address the systemic root causes of climate change itself. Climate justice is about social and economic justice – how democratic, peaceful and equitable solutions, not military violence and the extractive economy, best serve the interests of humanity. Taking action on climate change is essential to global stability and peace.

GGJ is taking leadership in formations across borders to sustain and grow a necessary global movement so that future generations may thrive on our planet.

We arrived in Cancún with the Indigenous Environmental Network (IEN) and allies. Our delegation of 55 leaders from U.S. grassroots social movements had the following public demands:

On the inside, our accredited representatives advanced the Cochabamba People’s Agreement and the Declaration of the Rights of Mother Earth in the UN deliberations. All of us participated in La Via Campesina caravanas, built relationships with Mexican communities affected the climate crisis, and supported Indigenous Peoples and local forest dependent communities in resisting the implementation of REDD/REDD+ within climate negotiations.

We left Cancún more aware of the climate struggles within the US itself, committed to continuing to build alignment in the climate justice movement.

Outside the UN negotiations, the 1000 Cancuns call to action put out by La Via Campesina (LVC) was a main ingredient in the Cancun movement-building pibil. LVC put out the call on September 1st and from there, plans for action and coordination started bubbling all over the world. From jump, this was not only a call for people to stand in solidarity with small farmers, nor a simple call for people to take action to support protests happening in Cancun. Instead this was a call to lift up all of our unique struggles onto a common platform to show that poor people, indigenous people, and people of color across the globe – farmers, factory workers, children, mothers, families – are all impacted by the extractive economy and exploitative political structure that are the root causes of climate change.

Our Durban delegation consisted of fourteen U.S. grassroots leaders. We called on the State Department to reduce carbon emissions by 50% by 2017, drop the carbon market false solutions and adopt the Cochabamba People’s Agreement and the Universal Declaration of the Rights of Mother Earth, and to drop the Keystone XL pipeline.  Other goals included:

We condemned the negotiations at COP17 as a crime against humanity. States delayed action until 2020 and agreed on a 4% degree Celsius increase in global temperatures as an acceptable threshold. This decision essentially enacted a climate apartheid where the richest 1% sacrificed the 99% to climate catastrophes. We condemned the U.S. government as the primary perpetrator.

Still, we left Durban hopeful as we say 10,000 people flood its streets on the Global Day of Action for Climate Justice. We witnessed trade unions lay foundations for uniting its movement with environmental and climate justice movements. We participated in the launch of the 1 million climate jobs campaign. Our comrades, IEN, led the formation of a new coalition for a moratorium against REDDs. We took action against BP, Shell and other big corporate polluters. A new African Food Sovereignty Alliance was Launched and the international movement for food sovereignty was strengthened.  More waste picker unions formed throughout the world.

We came home with hope and a bounty of lessons to deepen our commitment to the fight for worldwide systems change.

Outside the UN negotiations, GGJ and La Vía Campesina called for a mobilization on Saturday, December 3, 2011 under the banner of “1000 DURBANS FOR CLIMATE JUSTICE! STOP THE 1% FROM PROFITING FROM POLLUTION, LIFT UP COMMUNITY SOLUTIONS THAT COOL THE PLANET!”  On this day, social movements across the globe created 1000s OF DURBANS in conjunction with the social movement activities around the UN climate talks in Durban, South Africa.

Slogans from the decentralized actions:

In Los Angeles, a 200 person-strong crowd took the message of 1000 Durbans to the steps of City Hall. Marching from Union Station to City Hall, they called upon the Mayor and the Metropolitan Transportation Authority to stop the 710 Freeway expansion, and instead expand public transportation. The Busriders Union’s Judi Redman broke down how bus service cuts stink for bus riders and stink for the planet, with a degraded transit system forcing a lot of folks to put polluting cars back on the road. Bill Gallegos of Communities for a Better Environment drove home the need for our society to leave behind an economic and political system that prioritizes corporate profits over human health and the environment. The Labor Community Strategy Center/Busriders Union (BRU), Communities for a Better Environment (CBE), Eastyard Communities for Environmental Justice (EYCEJ) and Physicians for Social Responsibility Los Angeles (PSR-LA) joined forces to organize the action.

World leaders began drafting what would eventually become the Paris Agreement in Lima at the UN Framework Convention on Climate Change (UNFCCC) Conference on Parties (COP 20).  The People’s Summit on Climate Change coincided with the last few days of the UN process, providing a space for concerned people, organizations and social movements to “…share initiatives, proposals and experiences, as well as define and coordinate our agendas, to bring pressure to bear on the decision makers at COP 20, and demand that the official negotiators take account of the world’s citizens and peoples.”

GGJ organized a delegation of an incredible cohort of 12 GGJ leaders who built with movement allies to oppose false promises, co-create solutions coming from the grassroots and demand that governments be accountable to the People and the Planet. Read reports from our delegation here.

To Paris, we brought over 100 US grassroots leaders calling for justice for the people and the planet. The It Takes Roots to Weather the Storm delegation included leaders from Indigenous, Black, Latinx, Asian and working-class white communities.

We organized a petition We called on President Obama, Secretary of State John Kerry, and US lead negotiator Todd Stem to make bonding commitments in response to scientific findings and the demands of frontline communities to:

We condemned the protest ban and affirmed our collective right to raise our voices in dissent. We took to the streets with thousands of people from all over the world and demanded No War, No Warming – Build and Economy for the People and the Planet! We stood in solidarity with the victims of violence in Paris, Beirut, and Mali as well as their families and loved ones. Though we succeeded in forcing world leaders to sign an agreement, the Paris Accord itself reflected the commercialization of nature, not the public interest. It was based on a carbon market that allows developed countries to continue to emit dangerously high levels of greenhouse gasses through shell games, imaginary technofixes and pollution trading schemes. The accord continued to enable big polluters to continue polluting, as well as land grabs, and violations of human rights and the rights of Indigenous Peoples. GGJ condemned the COP21 Paris Accord for failing humanity and called on people to push for Just Transition at all levels of government.

In the midst of the Indigenous-led struggle of the water defenders in Standing Rock, GGJ led the It Takes Roots delegation to Morocco for the COP22 to:

Our delegation included of:

On November 17th, we joined a direct action in solidarity with the Standing Rock Lakota Nation in their defense of Sacred Water. Representatives from indigenous peoples from all regions of the world with the International Indigenous Peoples Forum on Climate Change, as well as international allies, voiced support for all water protectors defending their lands and sources of life.

In Germany, during the first year of the Trump presidency, our delegation overshadowed the White House Dirty Energy Panel with an Indigenous, Black, and Latinx Water and Land Ceremony – We led a demonstration of song and prayer with a clear message: The promotion of coal and nuclear power by the United States has serious global impacts and is not an acceptable solution to mitigate and adapt to climate change.

We confronted CA Gov Jerry Brown at the America’s Pledge event for refusing to ban fracking, letting oil companies dump toxic waste into underground water supplies, and adopting policies written by oil lobbyists that prevent state and local agencies from directly limiting carbon emissions from oil refineries. We called on him to ban new drilling and fracking, phase out fossil fuel production and commit to a just transition to clean energy for all.

We joined global allies in the Ende Gelande Action calling for an immediate phase out of coal in Europe in order to keep fossil fuels in the ground. We supported the Indigenous Environmental Network and the Climate Justice Alliance in releasing the ground-breaking “Carbon Pricing” report. We lifted up the Just Recovery and Just Transition campaigns from Puerto Rico, and Mississippi to Zimbabwe and East Timor. We pressured the UN around human rights protection for land defenders, including Berta Caceres.

The purported goal of the COP24 negotiations was the implementation of the Paris Agreement. Countries agreed to develop and finalize the Paris Rulebook, which would set the agreement in motion by laying out the tools and processes to enable its full, fair and effective implementation.

It Takes Roots is aligned with more than 150 organizations globally around the People’s Demands to COP24:

Once again, GGJ was on the ground and as part of the It Takes Roots delegation. We continued building and organizing with international allies in the face of increasing racism, growing right-wing governments, white nationalism and corporate control.