The World Social Forum (WSF) is a process of global convergence founded in Brazil in 2001 under the slogan: “Another World is Possible.” Born out of the anti-globalization movement, WSF’s have provided a space for people from all over the world to meet, debate, and discuss strategies and alternatives to neoliberal policy. These convergences have birthed movements against war, poverty and environmental destruction. Click here to read the Charter of Principles and a chronology of dates and locations of annual WSF’s.

Grassroots Global Justice Alliance (GGJ) was born through conversations at the WSF to strengthen national grassroots movements and enable them to engage with international social movements to collectively confront neoliberal global policies. GGJ was the core group in the National Planning Committee in 2005. We stepped down from the committee in 2013 to focus on building the Climate Justice Alliance and the World March of Women US chapter. GGJ still serves on the International Council and continues to organize delegations to the WSF process. 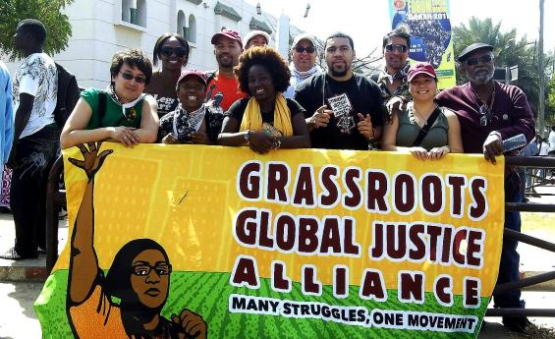 WSF2011: Dakar, Senegal 2011 (February 6-11) GGJ joined more than 66,000 delegates from across the world, including people from Egypt and Tunisia in the midst of uprising. For the first time, residents from Yemen took part in the forum and...