GGJ Members led a jam-packed interactive workshop at the Nato-Free Summit in Chicago on May 19th, the day before the NATO summit.  The workshop kicked off with discussions of how immigration patterns around the world often follow war timelines, creating trauma but also forcing people to become leaders for justice.  As funds are diverted away from social programs, we see how shock, war, and death are normalized.  The military creates conflict in families.  Violence, militarism, and war affect all of our lives, making an impression that is imprinted on us for our whole lives. 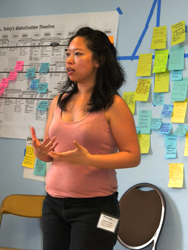 Participants first broke down the 20th century into a timeline of events that have brought us to the current moment, highlighting key economic and political events that show the progression of economic and political movements bringing us to the current moment.  With these key moments in mind, participants were introduced to the GGJ framework, which was a similar process of GGJ organizations coming together around converging crises.  War, warming, and economy have critical overlap, which indicate it is imperative for us to build another system.  The emphasis is on moving money from war to social needs, and recognizing that the green economy as a false solution (see GGJ’s petition on the “Greed” Economy).

The goal is grassroots internationalism or linking with people around the world, so the next section of the workshop was a communal visioning process of what success would look like.  Some visions and realities that participants shared were: 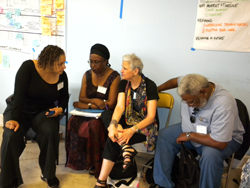 The final vision was one in which NATO is shut down, climate is restored, and the earth is regenerated.  Within this, Charity Hicks, a GGJ delegate from East Michigan Environmental Action Council (EMEAC), envisioned that, “…[i]n our communities, we are in a relationship with each other. We treat others how we want to be treated. There is nobody who is less than [us], and we treat each other with respect.  The earth has been respected and we have enough.”

Finally, it was important to lay the foundation for a bridge to lead from what we are doing now to where we want to be.  The following strategies were discussed to strengthen the work we are all doing:

As GGJ National Coordinator Cindy Wiesner said, “We need more conversations about strategies that are informed by what we do now.  We need to be grounded in our work but also move beyond our comfort zones.  Because of these multiple crises we need to address them in a different way, [we need] more strategy sessions, more getting into the streets.”